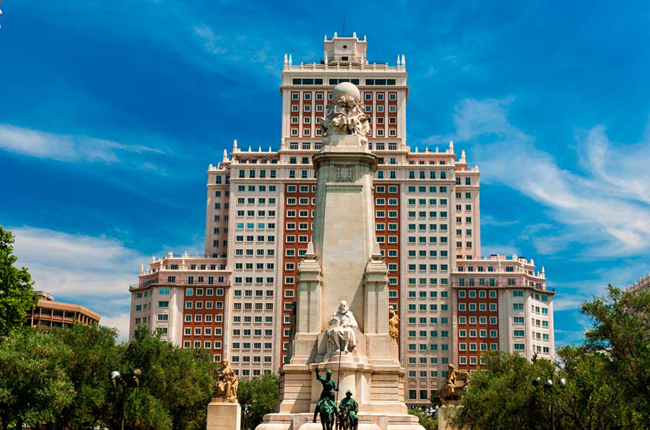 The RIU hotel chain has reached an agreement with the Baraka Group to purchase the 'Edificio España' outright and subsequently carry out the necessary refurbishments to turn it into the first Riu Plaza urban hotel in Spain. After purchasing the building from Wanda, the Baraka Group has sold the property on to RIU Hotels & Resorts.

RIU has always shown immense interest in this project. 'It had always been part of our strategic plan to open a Riu Plaza hotel in Spain and this opportunity in Madrid, in such an unbeatable location and emblematic building, surpasses all expectations,' say Carmen and Luis Riu, CEOs of RIU Hotels. 'After several months, the operation progressed to the point where RIU could buy the building outright, an opportunity that, after examining it in depth, we haven’t wanted to pass up,' explain the directors.

The Baraka Group Chairman Trinitario Casanova is to be in charge of the 15,000m² commercial area which will include department stores.

As was announced at the beginning of the year, the future 4-star Riu Plaza hotel will occupy 24 of Edificio España's 27 floors, with 650 rooms, while the rest will be given over to retail. The hotel will also contain over 1,800m² of space for events, with an open-plan room measuring 1,500m² with 6m high ceilings, turning it into a unique venue in the centre of Madrid. It will also have two restaurants, a rooftop swimming pool next to the Sky Bar and an additional 900m² of space for events. RIU currently has six Riu Plaza hotels around the world. The first opened its doors to guests in Panama City in 2010 and since then has been joined by the Riu Plaza Guadalajara in Mexico, the Riu Plaza Miami Beach and Riu Plaza New York Times Square in the United States, the Riu Plaza Berlin in Germany and more recently, the Riu Plaza The Gresham Dublin, in Ireland.

The international RIU chain was founded in Mallorca by the Riu family in 1953 as a small holiday firm and is still owned by the family's third generation. The company specialises in holiday resorts and over 70% of its establishments offer its acclaimed All Inclusive by RIU service. With the inauguration of its first city hotel in 2010, RIU is expanding its range of products with its own line of city hotels called Riu Plaza. RIU Hotels & Resorts now has 95 hotels in 19 countries which welcome over 4 million guests a year and provide jobs for a total of 26,867 employees. RIU is currently the world's 29th ranked chain, one of the Caribbean's most popular, the second largest in Spain in terms of revenue and the third largest in number of rooms.