Paris Hotel Market: A Spectacular Start to the Recovery

Home/Paris Hotel Market: A Spectacular Start to the Recovery

Paris Hotel Market: A Spectacular Start to the Recovery

Tourism in Paris was heavily impacted by the COVID-19 pandemic and travel restrictions, at a time when the market was recovering from terrorist attacks (2015/16), the yellow-vest movement (2018/19) and transportation strikes (2019). However, the strong government support combined with the city’s worldwide appeal have resulted in a dynamic rebound for the tourism sector. The easing of travel restrictions and successful vaccination rollout in France and across Europe have allowed a rise in tourist numbers from June 2021, resulting in a substantial market bounce in the second half of the year, in line with the country’s economic growth. Paris has remained one of the most desirable destinations for hotel investment for more than a decade thanks to strong economic and tourism fundamentals.

Overall visitation to Paris is robust and has remained broadly stable at between 15 million and 16.5 million until 2016, which marked the backlash of the 2015/16 terrorist attacks. From 2017 to 2019, demand strongly recovered, with 2019 being a record year in terms of tourist arrivals: challenges such as the yellow-vest movement, the heatwave in June and transportation strikes were counterbalanced by successful international events and strong growth in domestic arrivals. As with the rest of the world, tourism demand dropped significantly from March 2020 following the outbreak of the COVID-19 pandemic. However, compared to other gateway markets, Paris experienced a strong rebound in demand from June 2021, supported by the well-balanced customer mix, the diversified demand sources and the broad seasonality of the market. A recovery initially driven by domestic and European leisure customers is being further supported by the slow but continued return of face-to-face events, which are expected to gain momentum from mid-2022. Furthermore, the hosting of the Rugby World Cup in 2023 and of the Olympic Games in 2024 is expected to crystalise the recovery of international tourism to pre-pandemic levels. 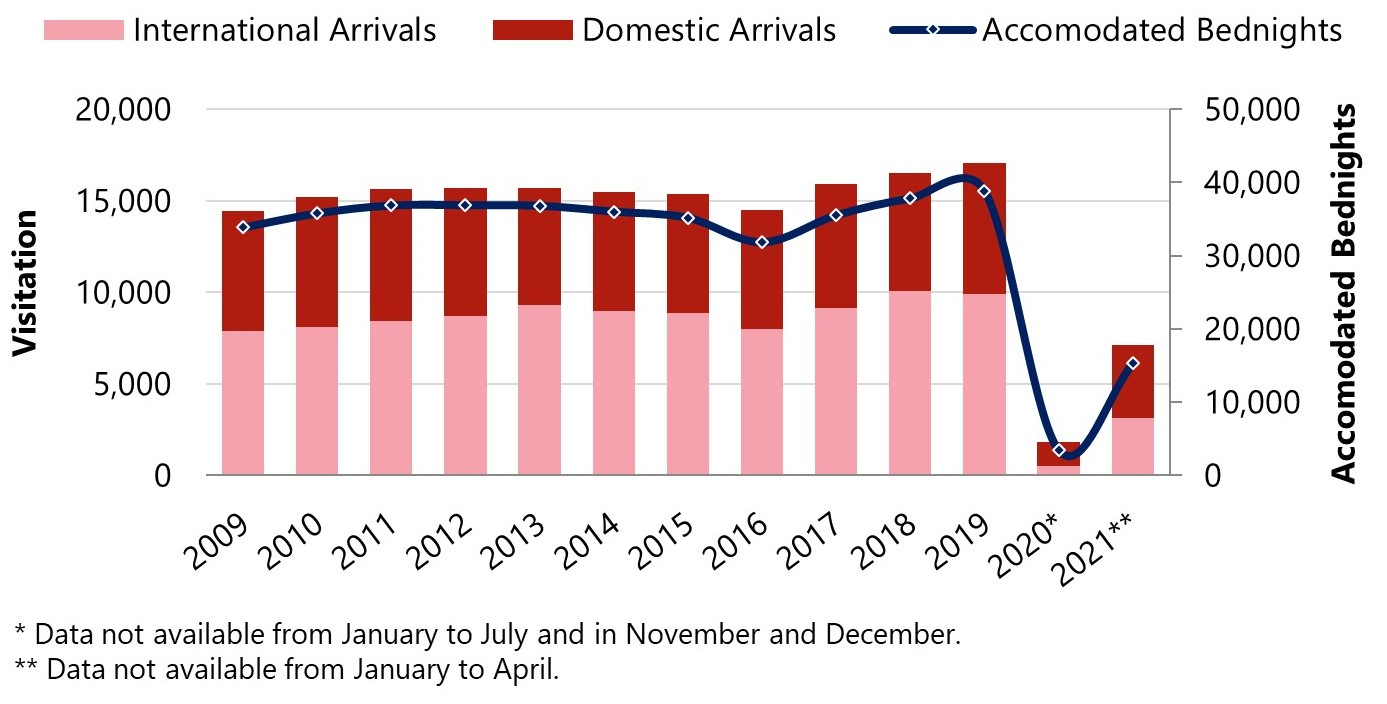 The Parisian hotel market has undergone a major shift upmarket over the last ten years, as the proportion of upscale and luxury hotels increased and that of non-classified and budget hotels remained flat or even decreased. As of early 2022, Paris had 1,585 hotels providing some 84,000 rooms. Among the high-profile openings in 2021 were the 149-room Kimpton St Honoré Paris (August), the 72-room Cheval Blanc Paris (September), the 82-room Madame Rêve (October), the 76-room Bulgari Paris (November), and the first Soho House in France, offering 36 rooms and opened in September.

Going forward, Paris has a reasonable pipeline of 3,600 rooms coming to market in the next five years, representing around 4% of existing supply. The five-star hotel segment is expected to be challenged, as 900 rooms in this category are forecast to enter the market by 2024, representing 11% of the five-star room stock. New hotel openings include the first SO/ brand hotel (Accor) in July 2022 as part of the Morland Mixite Capital mixed-used development and the 139-room Tours Duo MGallery (Accor) on floors 17-27 of a new-build tower in Paris’s 13th arrondissement, expected to open in Spring 2022.

The modest hotel pipeline combined with a reasonable existing hotel supply should allow the city to capitalise on the additional demand from the Olympic Games in 2024, whilst at the same time limiting post-Olympic adjustments in performance, as experienced in markets with a large pipeline leading into the event. The outlook for this market is, in our opinion, very strong. 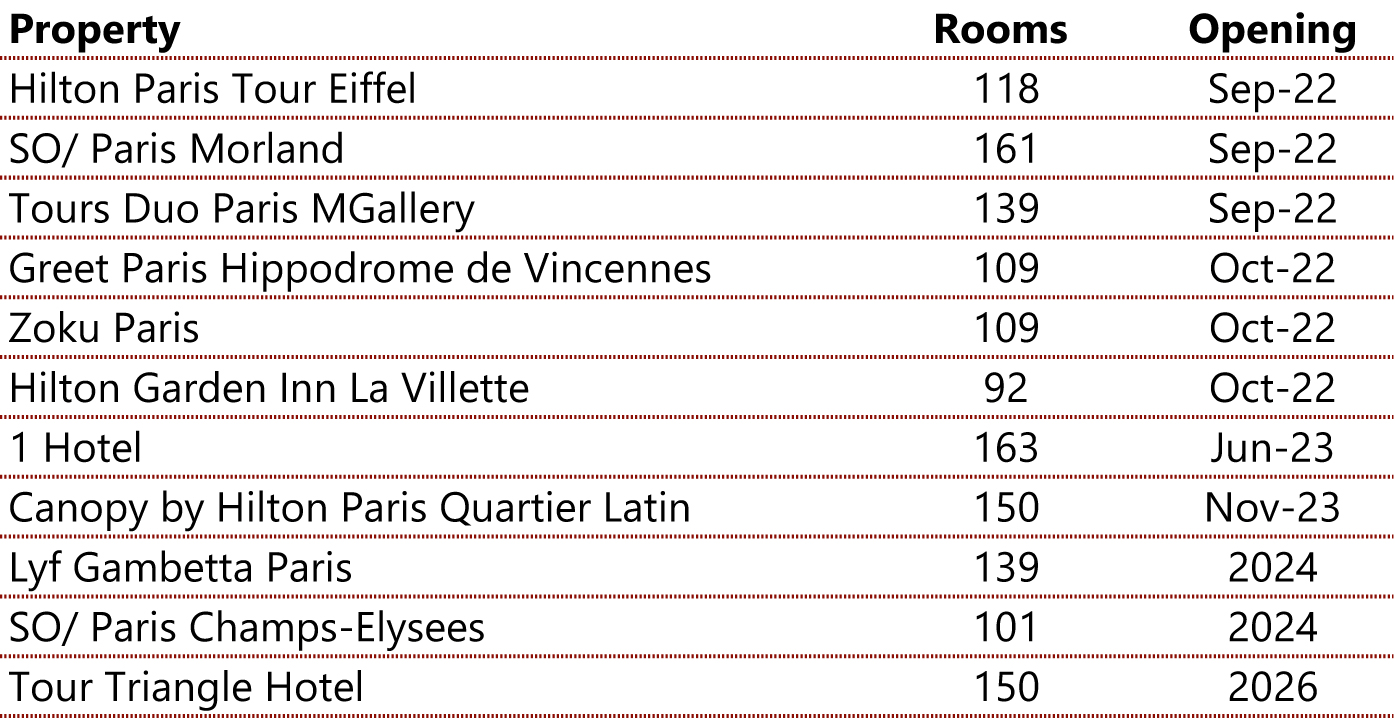 The Paris market has remained amongst the core hotel investment destinations across Europe, with prices being pushed to record levels despite performance being impacted by a series of challenging events since 2015/16. However, since the outbreak of the COVID-19 pandemic, investor appetite has tended to move towards non-mature markets where there are potential distressed assets while prices in Paris have remained at their highest. At the same time, asset liquidity has been undermined by lenders’ reluctance to finance hospitality.

For the latest value trends, please refer to our annual European Hotel Valuation Index (HVI), which showed that Paris maintains – by a significant margin – the highest value per room compared to other European markets.

Paris remains one of the most popular destinations in Europe, both for tourists and investors. The pandemic has proved the resilience of the market, with no asset sold at a discount price, and once again the highest price per room in our HVI. Performance recorded in the second half of 2021 suggests that the hotel market could recover much earlier than expected, especially with the 2023 Rugby World Cup and 2024 Olympic Games. The main uncertainty lies in the ability of the industry to absorb the cost explosion resulting from the pandemic, the subsequent wage negotiation and the war in Ukraine.

Mathilde is an analyst with the HVS London office. Before joining HVS, Mathilde gained hotel investment and asset management experience in Paris, France. A native French speaker, she holds an MSc in Global Management with a specialisation in Finance from the EDHEC Business School. Her main responsibilities at HVS include hotel valuations, feasibility studies and market overviews for European hotels. For more information, contact: [email protected]. 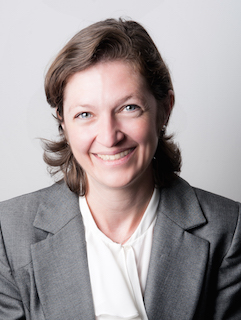 Sophie Perret is a senior director at the HVS London office. She joined HVS in 2003, following ten years’ operational experience in the hospitality industry in South America and Europe. Originally from Buenos Aires, Argentina, Sophie holds a degree in Hotel Management from Ateneo de Estudios Terciarios, and an MBA from IMHI (Essec Business School, France and Cornell University, USA). Since joining HVS, she has advised on hotel investment projects and related assignments throughout the EMEA region, and is responsible for the development of HVS's business in France and the French-speaking countries. Sophie completed an MSc in Real Estate Investment and Finance at Reading University in 2014. Sophie is also a certified surveyor and a member of the RICS. For further information, please contact: [email protected] or +44 20 7878- 7722 (Work)

HVS Monday Musings: Rethinking Hotel Loyalty Programs in the Post-COVID World
Will Travel Defy Inflation?
Travel Trouble: Florida Tourism Slowing Amid Recession Fears, Robust Competition
U.S. Travel Forecast: All Sectors Projected to Surge in Short Term, but Headwinds Are on Horizon
Can the Hospitality Industry Recover?
Contrasting Fortunes for Tourism? What We Know and Don’t Know as Tourism Ramps Up
NYU Conference Takeaways: Despite Some Challenges, the Hospitality Sector Is Still Looking Good
AHLA Statement on COVID-19 Travel Testing Requirements
Accommodation Preferences After COVID-19: Back to Normal or a New Normal?
In Focus: Santorini, Greece
HotStats’ COO Talks Profitability — Today and Tomorrow
Support Builds for Repeal of Pre-Departure Testing for Inbound Air Travelers
Revenge Travel in 2022: Are We Really Traveling With a Vengeance?
Europe’s Luxury Hotels Bounce Back From the Bottom
Will Hotels Evolve at the Extremes?
The Time Is Now: White House Must Remove Pre-Departure Testing Requirement
Sports Tourism – A Rewarding Opportunity for Hotels
Lodging Market Should Recover Fully by 2023
The Year of the Big Family Holiday: Brits Set to Spend Over £80bn on Family Holidays this Year
Barnes Urges Action on Bills to Aid Recovery, Competitiveness of Travel Industry