Environmentally conscious hotels and commercial laundries across the United States, Mexico, the Caribbean, and United Kingdom are among the latest Xeros’ customers to reach the million-gallon savings mark. Additionally, the Hyatt Regency Reston and Hilton LA Universal City each have three Xeros near-waterless laundry systems installed and have now individually saved over five million gallons of water.

Members of the Xeros Million Gallon Club are recognized as sustainability-focused businesses that are committed to conserving water and have saved over 130 million gallons of water combined.

"The Xeros technology has not only helped us further our commitment to the environment but provides validation for our green initiatives,” said Kevin Kretsch, General Manager at Hyatt Regency in Reston, Virginia. “And the high level of cleaning performance enables us to improve our guests’ comfort with whiter, fresher linens and towels.”

“Xeros’ eco-friendly laundry systems provide us a way do our part in water conservation which is pivotal in California,” said Mark Davis, General Manager of the Hilton LA in Universal City, California. “With Xeros we have been able to dramatically cut our water and energy consumption which has significantly reduced our operating costs.”

The Xeros laundry system replaces up to 80% of the water with polymer spheres that gently massage textiles to provide superior cleaning results as compared to conventional aqueous washing methods. By combining the spheres’ molecular structure with a proprietary detergent solution, dirt from soiled items is attracted and absorbed by the spheres, producing cleaner results in ambient water. The reusable spheres have a lifespan of hundreds of washes before being collected and recycled.

“As water scarcity issues escalate across the globe, the need for businesses to implement water saving technologies has never been greater,” said Mike Ferrand, Commercial Director at Xeros. “We commend our customers’ environmental leadership and are proud that Xeros’ near-waterless system is enabling them to save literally millions of gallons of water.” 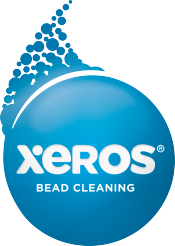 The Xeros Logo, Xeros, and Xeros Sbeadycare are trademarks of the Xeros group of companies.