Home/It’s March Madness and Everything Is Awesome 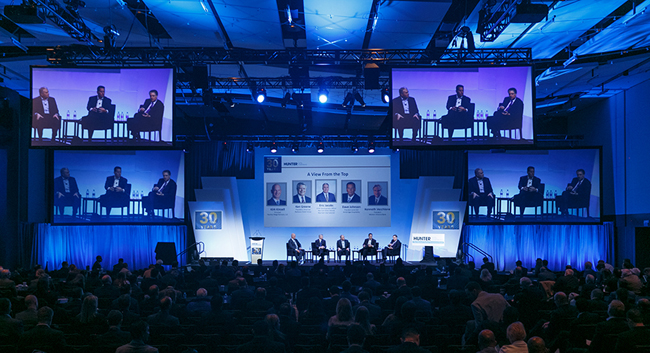 Celebrating 30 years, Hunter packed the right amount of positive energy and insights for the hotel industry

As more and more events are added to the schedule each year, too often we hear the same speakers rehash the same industry information. From the start, the Hunter Hotel Conference set itself apart. Celebrating its 30-year anniversary, you couldn’t escape the overwhelming optimism in the ballroom and spilling out to the atrium as well as the occasional bumping into fans in Atlanta for the 2018 NCAA Division I Men's Basketball Championship South Regional at Philips Arena. While this short summary won’t do justice to the well-planned educational program, it will provide a small glimpse into this year’s slam dunk event.

I have attended the Hunter Hotel Conference the last few years. While the event is geared specifically to the hotel owners, REITs and those in finance and management, I always gain great insights surrounding myself with the investment people. And this year I have to say, the mood was different. The opening session on Thursday morning presented a statistical analysis equivalent to the Lego Movie song, “Everything is Awesome.” Loyal guest booking will continue to grow, RevPAR is up (4.4 percent) driven by strong occupancy (5.8 percent), and ADR on the books is up 2 percent over 2017. According to Regional Vice President, Global Business Intelligence Sara Duggan of TravelClick, convention business will continue to remain strong until a forecasted softening of the group market projected around 2021.

The positive nature continued during the second session, the always well received “View from the Top.” This year’s panel was comprised of C-level representatives from Radisson Hotels, Ambridge Hospitality and Marriott International, as well as Kenneth Vecchione, president, Western Alliance Bank. Fueled by the recent tax cuts, development and infrastructure bills, a positive financial outlook is expected to force hotel equity to compete with other equity outlets.

Marriott International Chief Development Officer Select Service Eric Jacobs said that Marriott is encouraging owners to renovate and reinvest with this positive equity. The feeling in the room was that the hotel business continues to grow and could remain bullish for the next few years. When asked specifically about acquisitions, Jacobs replied, “Our goal is growing the pie.” He went on to explain that Marriott seeks to continue to grow its foothold and is currently building a relationship with Alibaba to reach new customers in China.

Ambridge Hospitality President and CEO Dave Johnson said, “Following the Marriott lead, M&A is going to continue.” He prefaced that it might not be to the effect of what we saw with Marriott/Starwood, but that consolidation will continue. Johnson added that he sees a curtailing of current projects on the horizon, with a slowdown of new development in late 2018 and 2019.

From the banker’s perspective, Western Alliance Bank President Kenneth Vecchione said that despite disfunction in Washington, D.C., a great deal has gotten done over the last year and financially we are still seeing the economy pushing forward. Tax cuts and deregulation are very important and are encouraging to lending. The benefits of these recent changes are not yet seen but are coming and will affect investment in the short term. This will push growth rates up. However, he cautioned that he has some concerns such as RevPAR slowing and the rising cost of construction, as well as the possibility of lesser deals “hibernating” or being put on the back burner.

One thing brought unanimous agreement from the panel: human capital is the most important focus currently – and is a cause for concern. Radisson Hotel Group President of the Americas Ken Greene said, “Attracting talent is our No. 1 concern.”

Johnson added, “We continue to see pressure on wages and lack of available talent. We could be nearing a crisis.” To this end the panel discussed the recent initiatives and efforts by industry organizations, including AHLA partnering with the US Department of Labor to invest in the workforce and AHLEI partnering with hotel companies and other industry companies to offer certifications and debt-free college degree programs to employees.

It is safe to say that there is a universal concern over available talent.

This panel as well as the keynote by Leonard Brody that followed continue to stir thought, disruption and inspiration. Please tune in to the upcoming June/HITEC issue of Hospitality Upgrade when I’ll share some insights from Brody’s keynote, “The Great Rewrite,” and how it will affect the hospitality industry.

Hunter Investment Conference needs to be on your radar. Plan to attend next March in Atlanta.