ISHC Honors Peggy Berg, Chair of the Castell Project, With the Pioneer Award at ALIS

Home/ISHC Honors Peggy Berg, Chair of the Castell Project, With the Pioneer Award at ALIS

ISHC Honors Peggy Berg, Chair of the Castell Project, With the Pioneer Award at ALIS 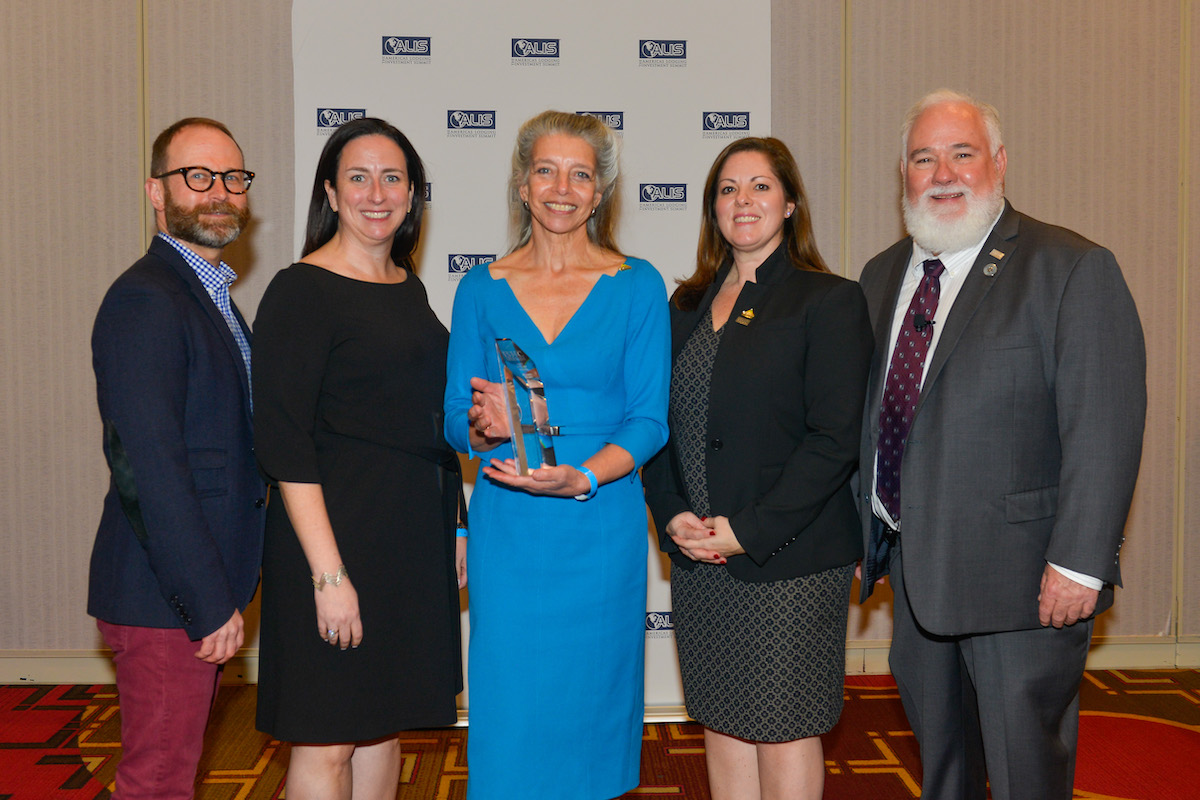 Los Angeles, CA — February 3, 2022 — The International Society of Hospitality Consultants (ISHC) in partnership with the Americas Lodging Investment Summit (ALIS) presented Peggy Berg, chair of the Castell Project, with the Pioneer Award which recognizes an individual annually who has made an outstanding contribution, achievement and/or improvement in the hospitality industry.

“I can tell you firsthand that Peggy has had a direct impact on my life and career, and I am just one of the hundreds, if not thousands, of people that share the privilege of knowing her, walking through the countless doors that she has opened and following the path that she has blazed for our industry.”

Upon accepting the award, Berg noted, “Pioneers step forward and create opportunity when restrictions are lifted – whether they are technological, legal or other restrictions.” She recounted life experiences that led her to that very moment, including the lifting of legal restrictions preventing women from accessing birth control; the Equal Employment Opportunity Act; being hired as the first female employee at PKF under the promise of not getting pregnant for two years; launching the Highland Group with her personal savings; and the Women’s Business Ownership Act lifting restrictions on women borrowing money for businesses enabling her to become a hotel owner.

“The Castell Project is about encouraging companies to remove their unintended restrictions and teaching women to grow past their ingrained social restrictions. This industry, including men and women here, have been incredibly supportive,” Berg said. “It’s never been about men versus women in hospitality. It’s always been about making the pie bigger as removing restrictions creates opportunity for us all.”

Berg also gave hope for the near future, “While restrictions on debt were lifted, equity has been surprisingly slow to respond. I believe 2022 will be the turning point when equity finally wakes up.”

Established in 1996, ISHC Pioneer Award winners are selected on a basis of three criteria: active involvement in the hospitality industry; contribution to the industry; and personal/organizational attributes and qualities adhering to professional standards recognized and respected by industry peers.

“This year’s Pioneer Award is extra special. Not only does Peggy have a long list of accomplishments making an incredible impact on the hospitality industry, but she also is a founding member, member #7, of ISHC. Her legacy is deep-rooted in the Society’s DNA, and we are thankful for her many contributions,” remarked Andrea Belfanti, CEO of ISHC.

Past recipients of the Pioneer Award include:

The International Society of Hospitality Consultants is truly The Leading Source for Global Hospitality Expertise, represented by over 200 of the industry’s most respected professionals from across six continents. Collectively, ISHC members provide expert services in over 50 functional areas and have specialized skills in virtually every segment of the hospitality industry. ISHC is dedicated to promoting the highest quality of professional consulting standards and practices for the hospitality industry. Candidates undergo a rigorous screening process, ensuring that all ISHC members have a reputation of integrity and are qualified by their experience, training and knowledge to develop and express sound judgment on industry issues. Additional information about the organization and membership process, along with a directory of ISHC members, is available on the ISHC website at ishc.com.

About The BHN Group

The BHN Group is the worldwide leader in developing and organizing conferences for the hotel and tourism investment community. With over three decades of experience, more than 160 events completed to-date, and in excess of 110,000 international delegates, these conferences have become “must attend” events for industry leaders who come together to network, conduct business, and to learn about the latest trends. The current slate of events include: the Americas Lodging Investment Summit (ALIS) in Los Angeles; ALIS Law in Los Angeles; ALIS Summer Update; Alternative Ownership Conference Asia Pacific (AOCAP) in Singapore; Caribbean Hotel & Resort Investment Summit (CHRIS) in Miami; Hotel Investment Conference Asia Pacific (HICAP) in Singapore; HICAP UPDATE; Hotel Opportunities Latin America (HOLA) conference in Miami; and HICAP Australia New Zealand (HICAP ANZ) in Sydney. The BHN Group’s website at www.Burba.com is the gateway for information about the annual conferences it produces, as well as a direct link to important players in the hospitality investment world.