Is an Aging Society a Threat or an Opportunity for Hospitality?

Home/Is an Aging Society a Threat or an Opportunity for Hospitality?

Is an Aging Society a Threat or an Opportunity for Hospitality?

What does “population aging” mean?

Population aging is the name for an ongoing demographic phenomenon, the fact that the average age of individuals in society increases over time. In other words, there are more and more old people in the population, and less and less young persons. 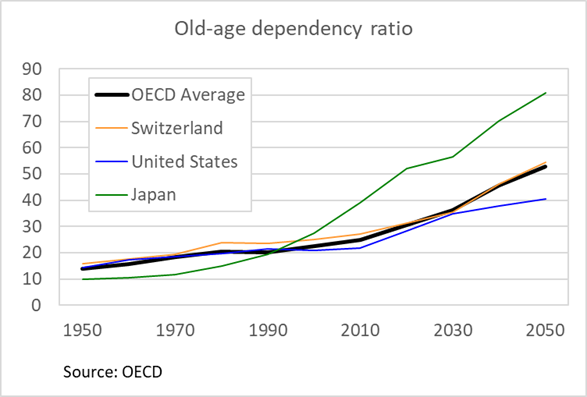 As the graph shows, the population aging phenomenon has been rather mild in previous decades: the OADR ratio has increased for instance from 21% to 32% over the past 30 years, on average. However, the phenomenon should become stronger in the future, as the OADR ratio is predicted to increase from 32% to 57% in the next 30 years. The graph also shows that the aging process should be much stronger in some countries.

The increase in life expectancy

Population aging is mostly due to the increase in life expectancy, and, to a smaller extent, by the decrease in fertility. Thanks to medical progress we live longer and longer. On the other hand, we tend to have fewer and fewer kids.

The long-run trend is the same around the world. There are however differences across countries, even at comparable levels of economic development. Figure 2 shows for instance that life expectancy at birth has increased more in Japan than in Switzerland, and even more than in the United States. In 1960, a newborn in Japan could expect to live 68 years. In 2010, a newborn in the same country could expect to live 83 years. In half a century, Japanese have gained 15 years in life expectancy, a staggering increase! Gains in life expectancy in Switzerland (11 years) and the United States (9 years) are smaller but also remarkable. 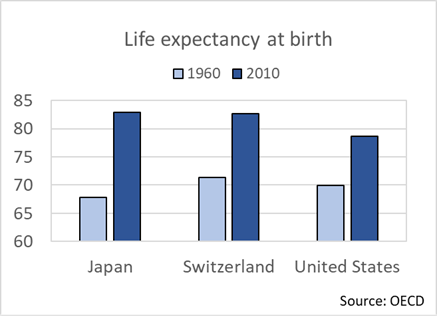 Figure 3 shows that fertility, measured by the average number of children that each woman has in her lifetime, has always been lower in Japan than in Switzerland in the past decades, and even lower than in the United States. Differences were large in 1960. On average, every Japanese woman gave birth to two children then, while American women gave birth to more than 3.5 children on average. Fifty years later, fertility ranges from 1.4 children in Japan to 1.9 in the United States. If life expectancy did not increase, this means that the population would be shrinking over time. 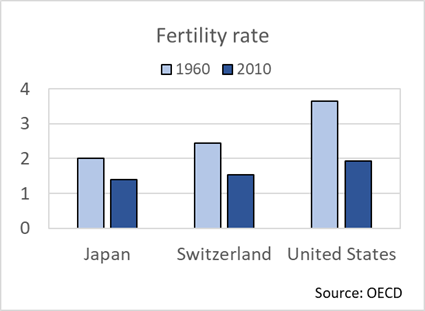 Figures 2 and 3 together explain why the OADR ratio increases more in Japan than other countries from the OECD.

In many countries, pensions are financed through social security contributions paid by current generations of workers. When the fraction of retirees over workers is increasing over time, it means that young generations have to support older generations more and more. It can become a large financial burden. In many countries, the OADR will double over the next three decades. In such a case, when three working-age people pay for the pension of one retired person on average today, three working-age individuals will pay for the pensions of two retired persons in 30 years.

Some countries, like Switzerland, have a diversity of pension mechanisms which allows them to escape part of the financial challenge created by population aging. The challenge is still there, even if it is smaller. On 25 September 2022, the Swiss population is again called to vote on a new reform of its pension system, after turning down the last two reform proposals in 2004 and 2017. Most governments are busy designing pension reforms to deal with the challenge created by population aging. Some reforms are not easily accepted by the population.

Research has shown that travels and tourist expenditures increase with age in the early part of life, and then declines with age. Early in our professional career, our income increases and we tend to travel more when we earn more. After retirement however, we tend to travel less, even though income is there. As we become old, travel becomes more tiring.

If there are more and more old individuals in society, there may be less and less customers in the traditional hospitality industry. What should businesses in the hospitality sector do?

To counter potential losses of traditional customers, the design of specific offers to seniors is a topic of growing interest in the industry. Packages for senior guests may include for instance wellness centers, special diets and targeted recreational activities. It is too early to say if such offers could compensate for the loss of appetite for travel due to old age.

Combining hospitality approaches and retirement residence services may be another business option. New ventures aim for transformations of retirement homes for wealthy residents into places which feel like luxury hotels, for instance. Whether such combinations will be successful and can extend beyond luxury segments, or not, is to be seen.

The rise of international travel in the past decades has been spectacular: compared to 1950, there were 50 times more international trips in 2018. The trend is likely to continue and may compensate for the drop in travel due to old-age. Failure to adjust to demographic trends would however represent a missed opportunity

A slow process – but do we need to hurry?

Depends who is asking. As the graph shows, it is going to take decades for the OADR to increase significantly. Population aging is thus a slow process, but governments have no time to waste because under-financed pension systems accumulate debt over time. Businesses in the hospitality sector, on the other hand, have some time before their booking rates drop, if ever. The population aging trend is there, however, and early movers may be rewarded.

EHL Insights is a central source of actionable insights into the World of Hospitality, Business & Education.