In Memoriam: A Tribute to Professor Patrick “Chip” Cassidy

In Memoriam: A Tribute to Professor Patrick “Chip” Cassidy 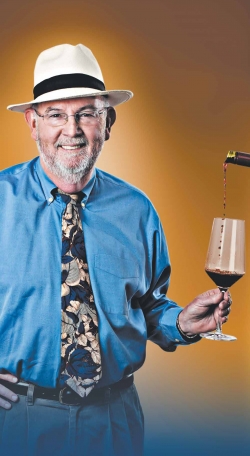 Professor Patrick “Chip” Cassidy, founder and director of the Wine Program at the Chaplin School of Hospitality & Tourism Management at Florida International University, passed away peacefully on October 28th in home hospice care. The cause of death was complications of esophageal cancer. Considered South Florida’s foremost wine expert and affectionately known as “Miami’s Wine Guru,” Professor Cassidy brought his love of wine, travel and country to his students and to the South Florida community.

Says Michael Cheng, Ph.D., CHE, Interim Dean, Chaplin School of Hospitality & Tourism Management, “Chip was a born teacher and students flocked to his classes. His reputation and passion were global. His vision and commitment to the Chaplin School are the basis of a brilliant legacy that informs Florida International University’s hospitality program. That dedication inspired countless students to learn about wine and many opted for a career in the wine industry. Chip Cassidy was always there to offer his boundless expertise and enthusiastic encouragement. But his mentorship went beyond that. He raised funds for scholarships to send hospitality students abroad to learn about wine. He took students abroad on wine tours and helped them find jobs through his exceptional contacts.”

A popular raconteur, Chip enthralled his students with his tales of his travels and discoveries of vintages from Europe, Australia and South America. These conversations were often conducted over restaurant wine dinners with a hands-on lesson in wine pairing. His war stories of combat at the height of the Vietnam War were the stuff of legend. Chip served as a medic in the US Army and was awarded two Silver Stars, one for saving 10 of his comrades in the midst of a fierce attack. He was also awarded a Purple Heart for wounds incurred during his distinguished service.

A native of Long Island, New York, Chip moved to Florida in 1972 and worked as a wine steward at the legendary Breakers Hotel and as chief wine buyer with Crown Wine & Spirits, helping to turn the operation into one of Florida’s largest wine retailers. He joined FIU’s faculty in 1984.

Convinced that wine must be a key part of FIU’s hospitality curriculum, Chip persuaded Southern Wine & Spirits to sponsor FIU’s million-dollar Beverage Management Center at the North Campus. Its Wine Sensory Lab includes storage for thousands of bottles of wine, a lecture hall and a tasting room with finely calibrated air-conditioning filters, revealing the most subtle flavors of each wine.

Chip was one of the founders of SOBE, the South Beach Wine & Food Festival. The event has grown into a national, star-studded, five-day destination event showcasing the talents of the world’s most renowned wine and spirits producers, chefs and culinary personalities. All proceeds from the Festival benefit the Florida International University Chaplin School of Hospitality & Tourism Management. To date, the Festival has raised more than $30 million for the school. The festival also generates millions of dollars for Miami tourism.

The festival’s slogan, “Eat, Drink and Educate” could easily serve as Chip Cassidy’s own personal motto. In a 1992 interview with the Miami Herald, he recalled his first taste of fine wine as a teenager while visiting the home of an affluent high school friend. Chip persuaded the father to uncork a 1959 Chateau Lafite Rothschild. “I’ve been drinking like a king ever since.”

Chip’s passion for his work, his affection for his students and his love of life, food and wine are both endearing and enduring. He is fondly remembered by alumni and faculty of FIU from around the world and his legacy will live on in them and in future students of the Chaplin School’s Wine Program.

One of eight children, Chip was preceded in death by his wife Chris and two brothers, Myles and Kevin. He is survived by his siblings, Maureen, Desmond, Christopher, Robert and Terry and by his children, Megan and Patrick and two grandchildren, Dane and Cruise.

Says Dr. Cheng, “We send our heartfelt sympathies to the family and pledge that Chip’s legacy will be lovingly preserved. “To that end, his office will be kept just as he left it and his extraordinary library of 7000 wine books that he donated to the school will be carefully maintained.”

In celebration of Professor Cassidy’s life and as a commitment to preserving his legacy, the Chaplin School has established the Chip Cassidy Distinguished Professorship Endowment. This endowment will ensure the sustenance and prominence of the Chaplin School’s wine program, supporting in perpetuity the honored role of director in which Chip served so proudly and so effectively. If one wishes to make a contribution to the professorship endowment in honor of Chip, please contact Simone Champagnie at 305-919-4810, or email [email protected].