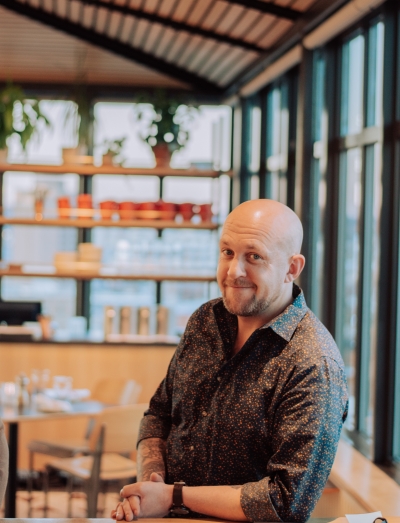 Baltimore, MD – Hotel Revival, an award-winning Joie de Vivre hotel located in the heart of Baltimore’s historic Mount Vernon neighborhood, is pleased to announce Donal Neilan as its new director of food and beverage. Neilan is responsible for overseeing and bringing fresh ideas to the hotel’s food and beverage program, which includes Topside and B-Side Cocktails and Karaoke as well as the hotel’s private events and room service.

“We are thrilled to have Donal join our team during this exciting time of growth for the hotel,” said Donte Johnson, general manager of Hotel Revival. “His extensive experience and knowledge of the industry will elevate Topside and B-Side to new heights.”

“I’m proud to be a part of a team that inspires the community to continue investing in us,” said Neilan. “We have a lot of exciting things in the pipeline, and I look forward to contributing to that inspiration.”

Growing up with parents who owned and managed a local pub and grocery store in Ireland, Neilan’s experience in hospitality began at a young age. At 18, he secured his first management position at a pub in Ireland. He went on to manage three Irish bars and restaurants in Belgium and then worked in the restaurant business in Holland and France. Following his experience in Europe, Neilan desired change and ventured to the United States.

Neilan’s first job in the U.S. was manager at McGinty’s Public House in Silver Spring, Md. His most recent position was at B&O American Brasserie in Baltimore as director of food and beverage and general manager, where he oversaw restaurant staff, banquet operations and worked closely with the general manager of the adjacent hotel to ensure maximum customer service and guest satisfaction.

Hotel Revival is located at 101 West Monument Street, in the heart of Baltimore’s historic Mount Vernon neighborhood. The 107-room, 14-story boutique hotel is contributing to the renewal of the area through a vibrant guest experience, thoughtful design, and restaurants and signature bars. The property embraces Mount Vernon’s notable history of art and culture by featuring an extensive array of local artists and artisans. It also embodies Baltimore by showcasing local products, the city’s history, and native cuisine. Topside, the hotel's year-round rooftop restaurant and bar, showcases the distinct flavors of Baltimore and the Chesapeake Bay. Revival offers four event spaces, totaling 4,000 square feet, accommodating a range of guests, from 10 to 200.  The hotel was developed by Denver-based real estate company NuovoRE and is the first Joie de Vivre property in Baltimore. For more information, please visit  www.jdvhotels.com/revival.

Since its founding in San Francisco in 1987, Joie de Vivre Hotels, a Hyatt brand, has made curating authentically local and eclectic experiences its signature. Each one of Joie de Vivre's hotels is an original concept designed to reflect its location and engage the five senses. The brand has a collection of boutique hotels and resorts in California as well as properties in Chicago, IL, Washington, DC, Baltimore, MD, and New York. Joie de Vivre Hotels is establishing its foothold on the East Coast with two new properties in New York City – Hotel 50 Bowery and Park South Hotel – and Revival at Mount Vernon Place in Baltimore, MD. Follow @JDVHotels on Facebook, Instagram, and Twitter for news and updates. For more information, please visit  www.jdvhotels.com.