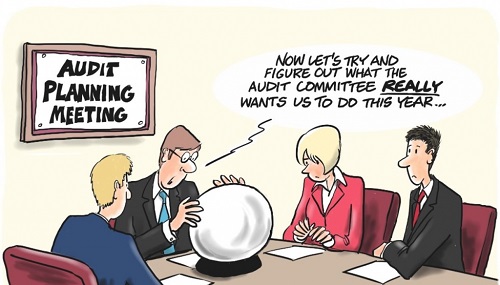 I recently watched a documentary on fraud and why the auditors were unable to detect anything even when they were right on top of what was so obvious to the person featured in the interview. The narrator also explained very clearly that the audit function is set up to fail.

This piece is about what hotel auditors do and what they really should be looking at to find inconsistencies that lead to detecting financial problems in the hotel.

Auditors are set up to fail because they are so green. I remember we had a revolving door of both internal and external auditors at the hotel for what seemed like years. Funny thing is other than the head guy the staff was always new. The audit function is the very first job these people get out of school and they are super green, even wet behind the ears.

On one audit visit, the auditor was tasked with sampling the inventory counts so he asked where the main kitchen was and in particular the “butcher shop.”

I replied, “It’s just upstairs. Let’s go visit and see if Desmond is there.”

Sure enough we went to butcher shop in the main kitchen and Desmond and his team were busy ripping apart chickens for a banquet later that day. The inventory was counted the night before, and we were to spot check. This was not Desmond’s first rodeo and he knew just by looking at us what the deal was.

The auditor had the count sheets and asked where the 200 kilo’s of beef tenderloin totaling $4,900 were. Desmond playing the part and looked puzzled then said, “Follow me.”

He took us into one of the large walk-in coolers and he opened a non-descript brown box and pulled out a side of smoked salmon and said here is the lot, we have 20 boxes in total. With this stunning substitution the auditor looked at the boxes and simply said thanks. Desmond was grinning from ear to ear.

The auditor seemingly did not even know the difference between salmon and beef. I think he was just so stunned to be in a busy production kitchen with a wild-eyed Portuguese man with a knife in his hands and did not want to ask any stupid questions.

But this example is just what is missing with the audit function. Auditors need to be able to smell when something is off and then dig until they satisfy their curiosity or until they find a smoking gun.

Auditors that I have been exposed to always do the same tests, they never do anything unexpected. They follow a reservation with a deposit that becomes a liability to the arrival, and then they track the folio and room charges up until settlement on a credit card, and then it is following the credit card as it becomes cash in the bank. Same with a purchase order, next it is verifying its receipt, then it is accounts payable and off to the bank as a credit. They test the inventory counts, count some floats, send some accounts receivable letters and maybe they look at the payroll and HR process to see that new employees are properly approved. But that is about it.

What they should be checking to find a smelly sock or a potentially smoking gun is right under their noses. But like the saying goes, “They don’t know what they don’t know.” They could just for fun check some of the following areas with a focus on certain potentially softer targets:

Expense reports – Grab the GM’s, the DOS’s, and the Controller’s files and sift through what the big shots are doing and spending the hotel’s cash on.

The Bank Reconciliation – This is the “grand puba” of places to park a pile of dung. What is outstanding and why? Does it even reconcile? How well set up are the accounts and what is happening each month? Does the hotel reconcile its cash and credit cards daily? That is like a doctor checking your blood pressure, too high and something is wrong.

Cost of Sales – Why is the beverage cost 30 percent, what should it be? A simple test of the menu prices and point of sales volumes compared to some costings tells us what the potential beverage cost should be. Alas, it should be under 25 percent. Five points on three million dollars a year in beverage sales means $150K is up for grabs. Now, that would be useful information that could get some heads rolling.

Look at the accruals – I knew a Controller that was famous for making his forecasted GOP almost every month. Does that sound to good to be true? Yes, it does! Dig through the backup and make sure everything submitted is included and objective. How much are we cooking the books?

What about the rebates, voids and paid outs? – Auditors do not even know what these are. If there is a constant drip of voids in the F&B outlets there is a problem. If the desk is rebating room revenue because of seemingly noisy or cold rooms, there is a problem underneath the surface.

Accounts receivable sundry and accounts payable sundry balance sheet accounts – In hotels these are the clearing houses for bad transactions. What package inclusions are we paying for and what revenue came in, do they balance or is the hotel losing its shirt? These accounts and their use are like the barometer of the hotel’s operating accounting health.

How about checking a stack of BEOs vs. the actual banquet bills and customer invoices? – Did the banquet team post everything? What was missed? This again is a very telling sample that points to big problems. While you are there check the average number of days out the BEOs are published. If it is too short then many other things are problematic; like cost of sales and labor planning.

The list of places to look is vast. Full-service hotels are large and extremely complex.

Understanding how they function and what to look for takes experience, and detecting problems that owners and stakeholders want to know about means you need to be properly testing the areas that are most problematic.