Hospitality Financial Leadership – How to Do a Breakeven Analysis Using REVPAR

Hospitality Financial Leadership – How to Do a Breakeven Analysis Using REVPAR

I have recently read more than one article on breakeven analysis and they all miss the mark in my books because they focus on what occupancy is needed. Occupancy is only half of the final recipe. You also need rate and really in the end you come up with your real break-even point using REVPAR.

The key ingredients that need to be assembled and analyzed are fixed expenses, variable expenses based on occupancy and finally the expenses that are directly related to revenue. I will lay out examples of these in the paragraphs below. For the sake of time and simplicity were going to assume this is a limited-service hotel without any F&B.

Fixed Expenses – This is the start of the analysis and unfortunately the biggest part of the costs for any hotel is fixed expenses. A fixed expense is any expense or payroll that does not change with different occupancy or revenue. It is there every month regardless of the activity in the hotel.

It is important to note that if you are trying to do this on a hotel that does not exist you are going to need to make the necessary assumptions about the costs and which ones are fixed and variable and how much. If you have history, it is a matter of being able to identify what items are fixed and being able to pull that portion out of the appropriate line items.

Make a list of every fixed item and calculate the daily value of that fixed item. Do this for absolutely every line of your P&L that is fixed. If you have an item like front office pay, it is going to have a fixed component and then a variable one as well. Make note of the way it works and record the fixed part here. We will use the variable part later. Pro tip: Don’t forget to include any “other income” as a credit for items like rentals or concessions.

Here is a sample: 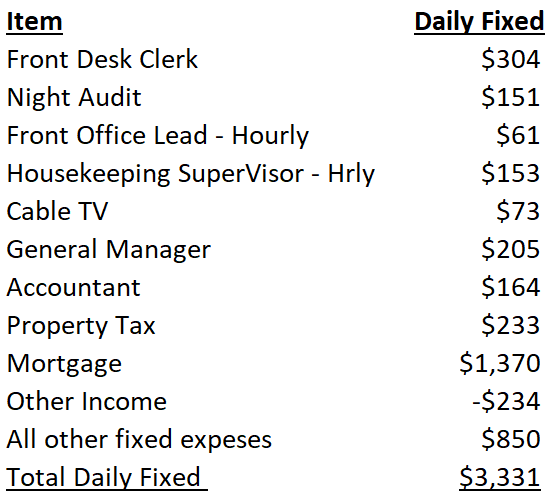 Next up it is the variable expenses you want to analyze. Here is where once again you need to know the details and analyze the P&L to pull out the variable costs and divide these by the real number of occupied rooms for a prior period. Once again, if this is a proforma then you need to make sure you know the occupancy used for that calculation so you can tease out the CPRO.

What you want is the CPRO, Cost Per Room Occupied.

Here is an example of what that looks like: 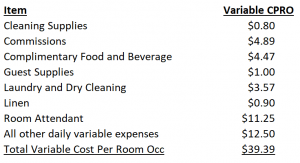 Pro tip – if you have items like front office payroll and reservations cost that are both fixed and variable, note the point at which the expense kicks in.

The next step is to lay out the costs that are a function of revenue. These costs ramp up or down based on sales.

For rooms commissions paid to Internet merchants use a percentage of revenue as the driver. Pro tip: If certain items are driven off just room revenue and others total revenue, make your spreadsheet recognize both calculations.

Now that you have all your costs for fixed, variable and percentage of revenue items laid out you can calculate the breakeven.

For this example, I am using a 110-room hotel. I build my summary to pull together the revenues and costs. All I need to do is play with the numbers in the two yellow cells to find the break even.

The revenues and variable costs adjust, and I quickly see the scenario that gets my hotel to breakeven.

The rate is $10 higher in the second scenario but REVPAR is the same at $62.

Once you have these different parts laid out it is relatively easy to insert your hotel’s costs and then you have a very good idea of what you are going to need in the way of REVPAR to achieve profitability.

I hope this is helpful and my final Pro Tip: Always remember that the only thing we know for sure about the budget/forecast/break-even analysis is… Drum roll… It is Always Wrong.

The budget/forecast/analysis is never right. It is just a plan and the actual result always will be different. But having a plan before we leave ensures we have a map to follow.