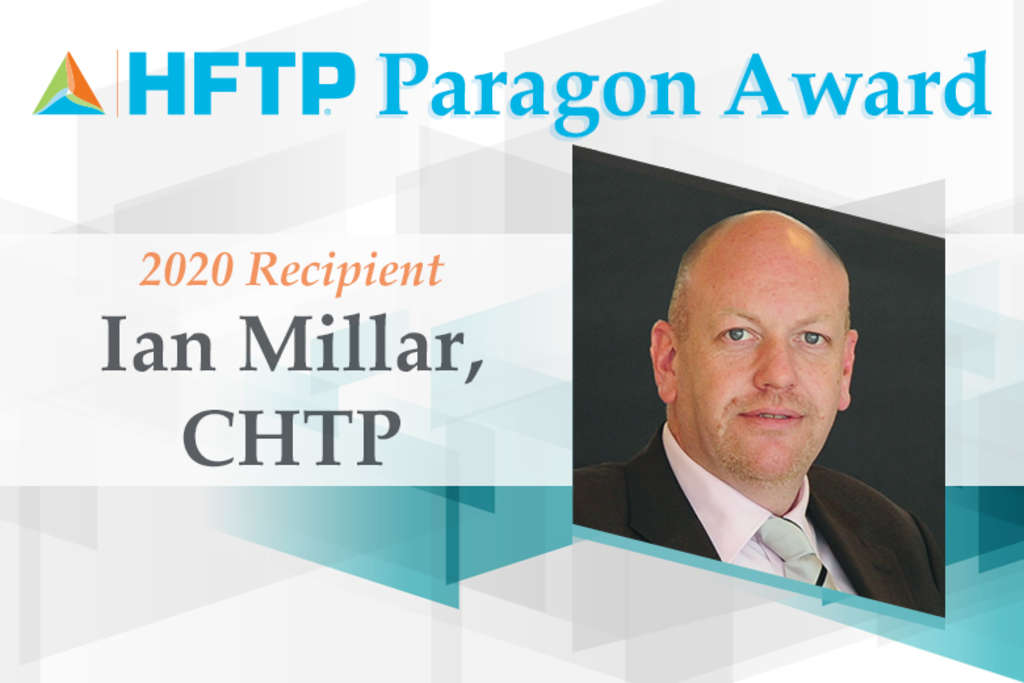 Ian Millar, CHTP was selected as the 2020 Hospitality Financial and Technology Professionals (HFTP®) Paragon Award recipient for his unwavering support of the association and substantial contributions to increase knowledge sharing and promote growth in the hospitality industry at large, specifically amongst students and hospitality professionals within Europe. Millar is a senior lecturer of IT at EHL in Lausanne, Switzerland. He has been a member of HFTP for 15 years and served in multiple association leadership positions including as vice-chair of the HITEC Advisory Council and on the HFTP Global Board. Millar will be honored on October 29 during HFTP’s Annual Business Meeting, held virtually.

“It is an honor to be recognized by my HFTP and industry peers,” said Millar. “It has been a pleasure being part of an organization whose interest is the improvement of the hospitality industry.”

Millar has been a senior lecturer of information technology at EHL for 18 years. Coming from a hospitality family, Millar has spent his entire life in the hospitality industry. Originally from the UK, he has lived and worked in the UK, Belgium, Thailand, France and now Switzerland. On top of his teaching, he is also a Student Business Project coach for final year bachelor students. Outside of EHL, Millar is a mentor for the Metro Techstars accelerator in Berlin, coordinator of the IHIF tech hub and a member of the advisory council for the Global Restaurant Investment Forum (GRIF). A mentor to five hospitality technology start-ups he works to enhance technology usage in the hospitality industry. Millar holds two patents on voice recognition technology.

Millar was a leader in the development of HITEC Europe, first held in Amsterdam in April 2016. He currently serves as a vice chair of the HITEC Europe Advisory Council. When HITEC Europe was cancelled this past Spring due to the pandemic, Millar and the advisory council wanted to serve the interest that had developed from the four-year event. In answer, the group produced a series of HFTP Europe Hangouts, informal Zoom gatherings led by expert speakers with a largely interactive component.

“One of Ian’s strengths is his ability to ‘think outside of the box,” said Derek Wood, HITEC Europe chair. “This is apparent in the way he structures his presentations, suggestions and contributions that he has made for running the events surrounding HITEC Europe. The structure and strategy behind the recent, very successful HFTP Europe Hangouts was down to his vision and suggestions.”

Established in 1999, the prestigious HFTP Paragon Award recognizes individuals each year who have made a significant and lasting contribution to both HFTP and the hospitality industry. Paragon Award nominees can be HFTP members; representatives of industry-related associations, societies or trade publications; leaders from hospitality businesses, educational institutions and other related disciplines. A panel of industry experts selects the award recipients who are traditionally recognized at HFTP’s Annual Convention each October.

Hospitality Financial and Technology Professionals (HFTP®) established in 1952, is an international, nonprofit association, headquartered in Austin, Texas, USA, with offices in Hong Kong, United Kingdom, the Netherlands and Dubai. HFTP is recognized as the spokes group for the finance and technology segments of the hospitality industry with members and stakeholders spanning across the globe. HFTP uniquely understands the industry's pressing issues and assists its stakeholders in finding solutions to their challenges more efficiently than any organization. It does this via its expert networks, research, certification programs, information resources and conferences/events such as HITEC. HFTP also owns the world's only hospitality-specific search engine, PineappleSearch.com. For more information about HFTP, email [email protected] or visit the HFTP website.