Give Recognition Where It’s Due

Home/Give Recognition Where It’s Due

Give Recognition Where It’s Due 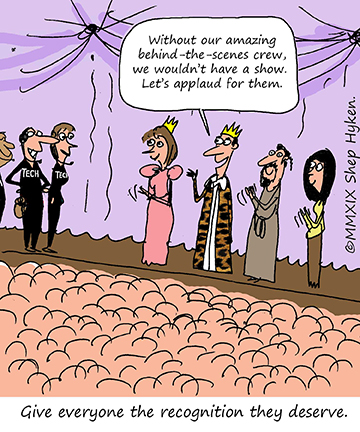 There are some pretty important people in your organization, and I bet many of them don’t know just how important they are. Most likely, they aren’t getting the recognition they deserve.

I was talking about this concept with my friend, Kent Higginbotham, and he shared a perfect example of this. Kent was in the Navy, and we affectionally nicknamed him “Admiral.” While in the Navy, Kent flew helicopters. Kent mentioned that most people think the pilot and co-pilot are the most important jobs on a helicopter. No doubt, without these two—or at least one of them—the helicopter can’t take off and land. However, Kent had a different perspective. To him, the most important person was the mechanic who made sure the helicopter was safe to fly. His words were, “That guy never got the credit he deserved.”

Not long ago I wrote about the famous chef, Thomas Keller. His first job at a restaurant was washing dishes. While it was probably the lowest-paying job in the restaurant, it wasn’t long before he realized it was one of the most important. No matter how famous the chef is—or how good the food is—if a meal goes out to a guest on a dirty plate, it’s getting sent back. Without clean dishes, you can’t serve the food.

In the corporate world, the job of a receptionist may not be the highest-paying in the company—most likely, far from it. However, the receptionist answers the phone, and the way they do it sets the tone for the rest of the interaction the customer may have with others in the company. Some companies have bestowed the title “Director of First Impressions” upon the receptionist, giving their responsibility the recognition that it deserves.

If the receptionist gets the title “Director of First Impressions,” maybe the dishwasher should have the title, “Manager of Cleanliness,” and the Navy’s helicopter mechanic should have the title, “Chief of Keeping the Team Alive.” You get the idea. Everyone deserves a title that reflects their true role in the organization—and recognizes how important they are.

Think of the different jobs everyone has where they work. What are their most important responsibilities? It doesn’t matter if it’s the lowest- or highest-paying job. Everyone has something they do that is crucial to the organization—something that would be noticed if that person were not there. Once you know what yours is, excel in it. Be the best you can be at it. And, above all, give everyone the recognition they deserve for their unique and important role within your company.