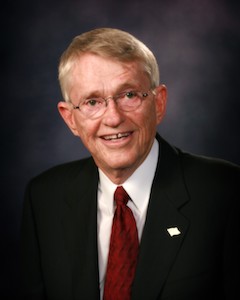 Andrea Belfanti, Executive Director of ISHC, commented, “Jack DeBoer is extremely deserving of this award and ISHC is honored to be able to give it to him. As the pioneer of the extended-stay concept over 40 years ago, his vision has forever changed the landscape of the hospitality industry. Today the extended-stay segment is even more relevant to our industry than ever before and continues to grow exponentially. ISHC members recognize the incredible impact Jack has had on our industry and we are thankful for his legacy.”

With the founding of Residence Inn, followed by Summerfield Suites and Candlewood Suites, DeBoer is recognized as the pioneer of the extended-stay and all-suite hotel concepts. He designed and built the first Residence Inn, an all-suite hotel, in downtown Wichita, Kansas, in 1975, and built or franchised 103 more properties before selling The Residence Inn Company to Marriott Corporation in 1987. In 1988, he co-founded Summerfield Hotel Corporation, a second-generation upscale all-suite hotel chain, which was sold to Hyatt. In 1995, he founded the Candlewood Hotel Company. After developing 130 hotels, Candlewood was purchased by InterContinental Hotels Group in December 2003. In June 2002, DeBoer used his extended-stay hotel model to create Value Place, a short-term apartment concept that continues to expand. Value Place, now known as WoodSprings, sold to Choice Hotels in January 2018. In 2014, he founded WaterWalk Hotel Apartments, a hybrid between a hotel and an apartment.

In addition to many other business ventures and civic interests, DeBoer loves to fly and is an active pilot. He currently holds the 3 kilometer world speed record for jet aircraft under 18,000 pounds. In 1988, DeBoer and his wife, Marilyn, completed a four-month-long trip around the world in his Gulfstream II. They studied the needs of the world throughout their travels. From this experience, the DeBoers are now deeply involved in World Vision projects in Myanmar.

ISHC Chair Elizabeth Winkle, ISHC, Chief Strategy Officer of STR and President Chris Cylke, ISHC, Chief Operating Officer of REVPAR International, Inc. presented the Pioneer Award during plenary session at ALIS. DeBoer was unable to be in Los Angeles to accept the award, but sent in video with his acceptance where he thanked ISHC and imparted his future vision of where the hospitality industry is headed.

The ISHC Pioneer Award was established in 1996 to recognize an individual each year who has made an outstanding contribution, achievement and/or improvement in the hospitality industry. Winners are selected on a basis of three criteria: Active involvement in the hospitality industry; Contribution to the industry; and Personal/organizational attributes and qualities adhering to professional standards recognized and respected by industry peers. Past recipients include:

The International Society of Hospitality Consultants is truly The Leading Source for Global Hospitality Expertise, represented by over two hundred of the industry’s most respected professionals from across six continents. Collectively, ISHC members provide expert services in over fifty functional areas and have specialized skills in virtually every segment of the hospitality industry. ISHC is dedicated to promoting the highest quality of professional consulting standards and practices for the hospitality industry. Candidates undergo a rigorous screening process, ensuring that all ISHC members have a reputation of integrity and are qualified by their experience, training and knowledge to develop and express sound judgment on industry issues. Additional information about the organization, along with a directory of ISHC members, is available on the ISHC website at ishc.com.

BHN is the worldwide leader in developing and organizing conferences for the hotel and tourism investment community. With over three decades of experience, more than 150 events completed to-date, and in excess of 100,000 international delegates, BHN conferences have become “must attend” events for industry leaders who come together to network, conduct business, and to learn about the latest trends. BHN events include: the Americas Lodging Investment Summit (ALIS) in Los Angeles; ALIS Law in Los Angeles; ALIS Summer Update; Alternative Ownership Conference Asia Pacific (AOCAP) in Singapore; Caribbean Hotel & Resort Investment Summit (CHRIS) in Miami; Hotel Investment Conference Asia Pacific (HICAP) in Hong Kong; HICAP UPDATE in Singapore; Hotel Investment Forum India (HIFI) in Mumbai; Hotel Opportunities Latin America (HOLA) conference in Miami; Hotel Investment Conference Europe (Hot.E) in London; and HICAP Australia New Zealand (HICAP ANZ) in Sydney. The BHN website at www.Burba.com is the gateway for information about the conferences BHN produces, as well as a direct link to important players in the hospitality investment world. BHN is a division of Northstar Travel Group.