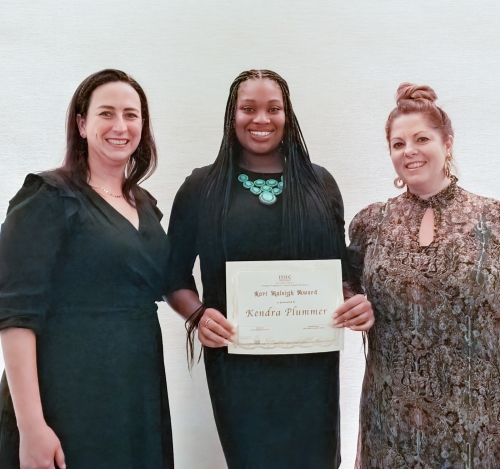 ATLANTA, November 23, 2022: The International Society of Hospitality Consultants (ISHC) has named Kendra Plummer as the recipient of the annual Lori Raleigh Award for Emerging Excellence in Hospitality Consulting. Plummer was honored at the ISHC annual conference held in Prague, Chez Republic. As winner, Plummer received a one-year associate membership to the ISHC to further professional relationships and experience all that the Society has to offer through planned events and interacting with top hospitality industry consultants from around the globe.

Plummer is the founder of Elise Capital, a hotel-focused, real estate investment and consulting firm dedicated to providing access to hotel investment opportunities for women and under-represented minorities. A big part of Plummer’s mission stems from educating and serving as a champion to individuals so that they can become hotel owners. Prior to launching her own company, Plummer’s career included positions at leading firms in hotel operations, asset management and acquisitions/development, where she ultimately sourced and structured over $500M in hotel deals. Plummer launched Elise Capital in 2019 and since then 80% of Plummer’s clients have been women and 95% first time hotel owners. In addition to her professional advisory practice, Plummer dedicates a significant amount of time to coaching and advising students at all levels. She served as an adjunct professor for two years at Gwinnett Technical College, where she taught Hotel, Restaurant & Tourism Management. Plummer sits on multiple boards and is active in several organizations focused on increasing diversity within the hospitality industry including the African American Real Estate Professionals, National Association of Black Hotel Owners, Operators and Developers, and She Has a Deal. Plummer received a degree in Tourism & Hospitality Management from Temple University and an MBA in Real Estate and Finance from the University of Miami.

“The Lori Raleigh Award for Emerging Excellence opens opportunities for new generations of industry leaders to advance past barriers creating a space for new thoughts and ideas to be heard. As our industry continues to evolve, developing networks of impactful leaders is critical. I’m honored to join the ranks of the talented group of awardees before me and look forward to joining the esteemed network of ISHC as I continue to make an impact on this industry.” said Plummer.

Andrea Belfanti, CEO of ISHC commented, “Kendra is the embodiment of who the Lori Raleigh Award seeks to highlight in the hospitality industry. Kendra has not only grown her business and her reputation as an industry leader, but she also actively volunteers her time and knowledge to help others, specifically women and under-represented minorities, overcome barriers to the hospitality industry. She has already accomplished so much in her career; it will be exciting to see how she continues to shape the future of the hospitality industry.”

The International Society of Hospitality Consultants is truly the leading source for global hospitality expertise, represented by over two hundred of the industry’s most respected professionals from across six continents. Collectively, ISHC members provide expert services in over fifty functional areas and have specialized skills in virtually every segment of the hospitality industry. ISHC is dedicated to promoting the highest quality of professional consulting standards and practices for the hospitality industry. Candidates undergo a rigorous screening process, ensuring that all ISHC members have a reputation of integrity and are qualified by their experience, training and knowledge to develop and express sound judgment on industry issues. Additional information about the organization, along with a directory of ISHC members, is available on the ISHC website at www.ishc.com.