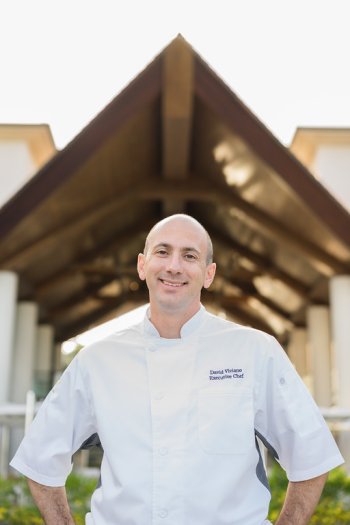 August 4, 2015 (KAPALUA BAY, HAWAII) – Richard A. Holtzman, Vice President, Managing Director at Montage Kapalua Bay, has announced the appointment of David Viviano as the new Executive Chef. An ambitious talent with experience spanning the past two decades, Viviano oversees all culinary operations at the oceanfront resort on the island of Maui, Hawaii, including menu creation and kitchen operations for Cane & Canoe, Sunset Patio and Hana Hou Bar, as well as for Mahana Market, In-Residence Dining and private dining.

“I am delighted to welcome Chef David to our Montage Kapalua Bay ohana,” said Holtzman. “His extensive experience and background in the hospitality industry, as well as his passion for authentic Hawaiian cuisine, which he cultivated during his time on Kauai, will support our resort in its future successes.”

Viviano comes to Montage Kapalua Bay from the St. Regis Aspen Resort & Spa in Colorado, where he was the “CheF&B.” In that uniquely titled role, he oversaw all culinary operations of the resort, supervised a food & beverage team of 70+ associates, and managed a multi-million dollar operation, leading to the second highest F&B profit margin in the hotel’s history. He also devised a sustainability program that was composting 6,000 pounds per week – the highest in the area. Prior to his appointment as “CheF&B,” Viviano had been Executive Chef and oversaw the re-conception of the hotel’s three-meal-a-day restaurant to traditional Italian. During Viviano’s time at the property, he was featured in numerous local and national publications, including Wine Spectator, Hotel F&B Magazine, Food Arts, Nation’s Restaurant News and Forbes, and won the Aspen Mac-n-Cheese Festival in 2014.

No stranger to the islands, Viviano fell in love with Hawaii and its rich heritage, gracious culture, as well as its distinct cuisine during his tenure as Acting Executive Chef at Kauai’s St. Regis Princeville in 2012. During his career, Viviano served as Executive Chef of The Westin Phoenix Downtown in Arizona, in addition to his three roles in his home state of Michigan including, Executive Sous Chef at The Westin Book Cadillac, Banquet Chef at MGM Grand Detroit, and Chef de Cuisine at Ritz-Carlton Dearborn. In addition, Viviano has experience in high-end restaurants, including Jardinière in San Francisco, California, which earned rave reviews and a James Beard Award nomination while he was on staff as Roundsman.

Viviano has a Bachelor of Arts degree in journalism from Miami University in Oxford, Ohio. Besides the art and craft of culinary, Viviano’s biggest passion is teaching and mentoring. When not hard at work in the kitchen – or on the laptop – Viviano enjoys cooking at home and traveling with his wife Christina and young son Dean.

The 24-acre Montage Kapalua Bay is an intimate, 50 residences and 6 grand residences, ranging from one to four bedrooms. Comfortable accommodations offer spacious living rooms, large private lanais, fully equipped kitchens, elegant master suites and luxurious bathrooms with designs that beautifully reflect the resort's Hawaiian heritage. Overlooking the picturesque Kapalua Bay, guests are able to relax by the multi-tiered lagoon pool, which cascades down the center of the resort; or they can enjoy island-inspired cuisine in one of the resort's restaurants or lounges. Harnessing the essence of Hawaii, Spa Montage serves exceptional palette of spa therapies, beauty treatments and wellness offerings - all inspired by the tropical surroundings. For more information, please contact Montage Kapalua Bay at (808) 662-6600; or visit the resort's website at www.montagehotels.com/kapaluabay.

Montage Hotels & Resorts is a hotel and resort management company founded by Alan J. Fuerstman. Designed to serve the luxury traveler and homeowner, the company features an artistic collection of distinctive hotels, resorts and residences in stunning settings that offer comfortable elegance, a unique sense of place and spirit, impeccable hospitality and memorable culinary, spa and lifestyle experiences. The portfolio of hotels, resorts and residences includes Montage Laguna Beach, Montage Beverly Hills, Montage Deer Valley, Montage Kapalua Bay, The Inn at Palmetto Bluff, a Montage Resort, and opening in late 2017, Montage Los Cabos. In 2014, the company launched Pendry Hotels, a second brand that will marry the culture of service for which Montage is renowned with an inspired, fashion-forward and design-driven approach to hospitality. The first Pendry Hotel, Pendry San Diego, will open Fall 2016. In addition, the company also operates some of the country's premiere golf courses, including Spanish Peaks Mountain Club in Big Sky, Montana and The May River Golf Club in Bluffton, South Carolina. For more information, please visit www.montagehotels.com.