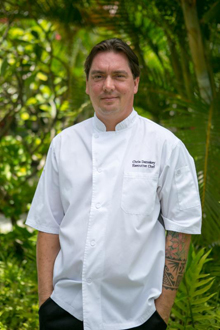 "We are excited to have Christopher Damskey join Montage Kapalua Bay as executive chef," said Richard Holtzman, vice president and managing director, Montage Kapalua Bay. "Christopher's expertise, familiarization with the island and leadership will be beneficial to the resort's food and beverage programming as we approach the year ahead."

Prior to joining Montage Kapalua Bay, Damskey was the chef de cuisine for three years at `Ulu Ocean Grill and Sushi Lounge at Four Seasons Resort Hualalai, where he proudly featured ingredients from 160 local farmers and artisans. He also served as chef de cuisine at Alan Wong's Amasia at the Grand Wailea Resort on Maui, where he was responsible for three dining outlets and the training and development of a 30-member culinary team. Preceding his time in Hawaii, Damksey has held culinary positions at Market by Jean-Georges at W Hotel, Boston; Le Méridien at Chambers Hotel and The Marsh Restaurant, Minneapolis.

Damskey holds two ACF Culinary Arts Degrees, one from St. Paul Technical College and the other from Scottsdale Culinary Institute. When Damskey is not in the kitchen, he enjoys traveling the world and learning about the diversity of cultures seen in Europe and the Middle East.

The 24-acre Montage Kapalua Bay is an intimate resort, with 50 residences, ranging from one to four bedrooms. Comfortable residential-style accommodations offer spacious living rooms, large private lanais, fully equipped kitchens, elegant master suites and luxurious bathrooms with designs that beautifully reflect the resort's island heritage. Overlooking the picturesque Kapalua Bay, guests are able to relax by the multi-tiered lagoon pool, which cascades down the center of the resort; or they can enjoy island-inspired cuisine in one of the resort's restaurants or bars. Harnessing the essence of Hawaii, Spa Montage serves an exceptional palette of spa therapies, beauty treatments and wellness offerings - all inspired by the tropical surroundings. For more information, please contact Montage Kapalua Bay at (808) 662-6600; or visit the resort's website at www.montagehotels.com/kapaluabay.