In this article, Hotel Appraisers & Advisors (HA&A) estimates Airbnb’s market share of U.S. lodging demand. This year’s edition of our study differs from prior publications in two major ways. Firstly, we isolate data from Airbnb, while excluding data from other, smaller home-sharing companies that were included in prior publications. Secondly, we have focused our analysis on Airbnb demand that we believe is most like traditional hotel lodging demand. We exclude, for example, the rental of shared rooms or rooms with shared living quarters.

Since its creation in 2007, Airbnb has become a dominant channel for selling lodging services that would otherwise be excess residential capacity. The company helps residential owners register, market, and sell excess residential capacity as lodging supply. As an early industry disrupter, Airbnb’s sharing economy application has become the leader in this niche of the lodging sector. In this article, we estimate Airbnb’s market share of U.S. lodging demand, measured by room nights sold. We discuss historical growth rates, the recent deceleration of Airbnb’s U.S. demand growth, and implications for the lodging industry.

The following figure illustrates our estimate of Airbnb’s U.S. lodging demand growth from 2008 through 2018. 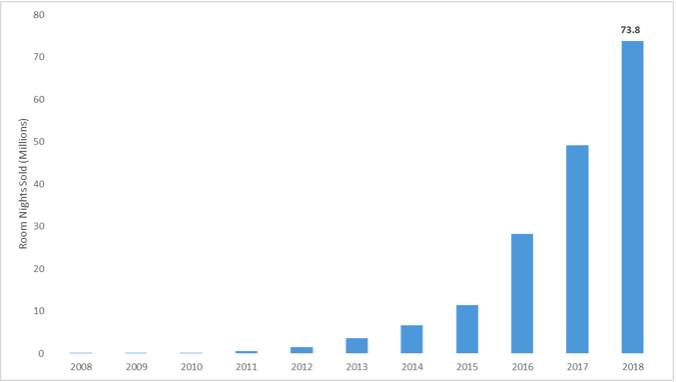 Demand has grown rapidly during the past few years. According to estimates from AirDNA, the total number of U.S. listing nights booked through Airbnb in 2018 was approximately 73.8 million. To make this data as relevant as possible for comparisons in the lodging industry, HA&A focused our analysis specifically on rentals that feature entire homes or apartments that were not lived in by the host during a guest’s stay or shared by other guests.

The following figure illustrates how the pace of demand growth for Airbnb has decelerated during the past 18 months in the U.S.

The sharing economy’s rapid growth has made Airbnb a significant participant in the U.S. lodging industry. Its market share has grown from nothing to the mid single-digits over the span of a decade. Based on Airbnb’s recent growth trends, its market share of U.S. lodging demand is likely to increase further before stabilizing.

Based on our estimates and data from AirDNA, the following figure illustrates Airbnb’s booking demand as a share of total U.S. lodging demand. 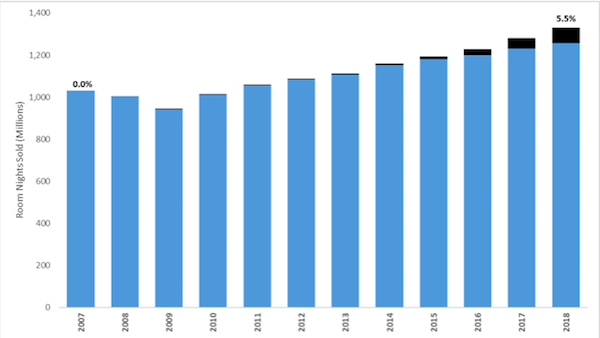 Airbnb’s market share has grown rapidly during the past few years. HA&A estimates that Airbnb accounted for approximately 5.5 percent of all paid U.S. lodging demand in 2018.

Several major hotel chains and lodging industry groups have communicated concern about Airbnb as a threat to hotel owners. However, the news is not all bad for investors in traditional hotels. If the Airbnb fee model proves itself as a long-term profit-maker, then we expect major hotel chains to acquire or develop similar platforms to offer their customers more lodging options in the sharing economy. The large hotel companies should also benefit from the brand loyalty, sophisticated data tracking, and powerful reservation systems they have worked so hard to develop. These could represent long-term competitive advantages that the major hotel companies could leverage to cut into Airbnb’s market share during the next decade.

Many of the figures discussed throughout this article include estimates. This report is intended for discussion purposes only and is not intended to be construed as investment advice.

Hans and his staff work in all 50 states and in several international markets. Mr. Detlefsen frequently speaks at conferences and private meetings. He has been quoted in numerous media and news sources.