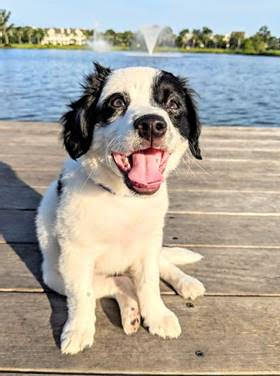 In March of 2017, a friend sent Ashley Bush a photo of an adorable little dog living the high life in the lobby of the Aloft Tallahassee Downtown. Chester, a rescue, was part of the hotel’s foster dog program.

Smitten by the picture, Ashley stopped in for a visit. The Leon County Humane Society placed Chester, a Pekingise/Chihuahua mix, at Aloft for his effervescence, abundant cuteness and ability to thrive in the busy environment of a hotel lobby. If Chester needed some private time, he could retire to his doghouse, a custom-built replica of the hotel.

Ashley felt an immediate connection with Chester. “I put him on a leash and took him around,” she recalls of the encounter. “He jumped up on the sofa next to me. He was very curious, very sweet. He seemed like a very well-adjusted dog.”

Ashley and her life partner, Walter Gordon, were still hurting from the death of their previous dog Penny, also a rescue, just six weeks earlier. They weren’t actively seeking a new pooch, but it suddenly seemed clear that opportunity was barking. Walter stopped in to visit Chester, and the deal was sealed: The dog would be going home with Ashley and Walter to their Tallahassee home.

Chester was the third dog adopted from the Aloft Tallahassee Downtown, part of a foster pet program started by the Aloft Asheville Downtown that has spread to also include Aloft Greenville (S.C.) Downtown and Aloft Orlando Downtown. All four hotels are managed by Tampa-based McKibbon Hospitality, and the foster dog program is exclusive to McKibbon’s Aloft portfolio. Each hotel partners with a top local animal rescue facility. Hundreds of rescue dogs have found new homes through the collective program.

The foster dog program had serendipitous beginnings, dating back to 2014. When Emma Ledbetter, director of food & beverage at Aloft Asheville, was flying to interview for her job, she sat next to a man who worked at an animal rescue facility. They got to talking. In an additional stroke of kismet, she sat next to the very same man on the flight home. The encounters sparked an idea in Emma.

After securing her job, she brainstormed with the hotel general manager about having an “ambassador dog” that would ultimately be adopted. The first canine guest, Gabriel, was housed in the back office. It took just three days for him to get adopted. Subsequently, the staff moved their foster dogs into a contained area in the lobby, and had the custom dog house built.

“Even associates who aren’t really dog people got excited and helped make the program a success,” Emma says. “And the guests love it. It’s so fun to see businessmen come in and the first thing they do is greet the dog.”

Community service is a major part of McKibbon Hospitality’s corporate culture. Leadership gives teams the freedom to undertake projects that will enhance the guest experience, lift employee enthusiasm and do good in the community. “The foster dog project is a perfect example of how these factors converge,” says Randy Hassen, President of McKibbon Hospitality? “It checks all the boxes. And it’s a great example of innovative thinking about how to run a successful hotel. We’re not surprised that three of our other Aloft properties started their own programs.”

That each hotel — all of which accommodate dogs — is located in a bustling central business district makes the addition of friendly, adoptable pooches all the more special.

Chester is still living happily and healthily with Ashley and Walter. “He brings us such joy,” says Ashley, who’s a department chair at the Florida State University College of Business. “He’s such a sweet, innocent little soul. He’s happy all by himself. He’ll go outside in the backyard, sit and watch birds, chase squirrels. And yet he’s also a lap dog. He’ll come in and snuggle. He likes to roughhouse, too.”

Chester has stayed a part of the Aloft Tallahassee family. “We make it a point to bring him by periodically,” Ashley says. “He gets so excited to see everyone, with his tail wagging.”

The couple hasn’t done much to train Chester. They love him as he is. “We used to have a no-dogs-on-the-furniture rule,” she says. “But we waived it for Chester.”

View B roll and images of Chester and foster dogs here.

Headquartered in Tampa, FL, McKibbon Hospitality creates memorable hospitality experiences that inspire brand and property loyalty. It’s how we’ve grown into one of the largest (and most awarded) hotel development and management companies in the country. We build and operate hotels for Marriott, Hilton, Hyatt, IHG and other iconic hospitality brands. We guide every facet of hospitality development and management, from site selection, design and construction management to hotel openings, operations and renovations. Our legacy is built on a foundation of integrity, anchored in how we value our guests, treat our associates and partners, and give back to our communities. Visit McKibbon.com to learn more.

With over 150 hotels now open in over 20 countries and territories around the world, Aloft Hotels, part of Marriott International, Inc., delivers a fresh approach to the traditional staid hotel landscape. For the ‘always on’ next generation of traveler, the Aloft brand offers a tech-forward, vibrant experience and a modern style that is different by design. For more information, please visit www.alofthotels.com and follow along on Facebook, Twitter, and Instagram.