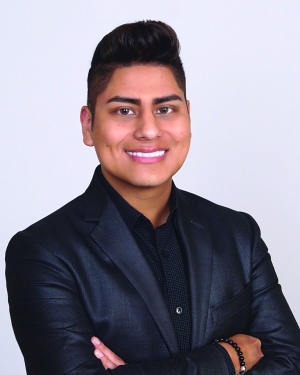 ORLANDO, Fla. (March 23, 2020) – McKibbon Hospitality, an award-winning leader in hotel management, today announced the appointment of 13-year hospitality veteran, Luis Arancibia, as General Manager of Aloft Orlando Downtown. In his new role, Arancibia will be responsible for overseeing all operations and functions of the historic 8-story, 118-room building owned by GDC Properties. In 2012, the building was added to the National Register of Historic Places.

“Luis is a highly dedicated professional and we are thrilled to have him continue his career within the McKibbon portfolio,” said Karl Oates, vice president of Lifestyle Hotels. “Luis’s forward-thinking management style and effortless creativity makes him the perfect candidate for the GM position at Aloft Orlando Downtown, one of the most unique and hip boutique properties in Central Florida.”

Arancibia has been part of the McKibbon family for 8 years and most recently served as General Manager for the 128-room Homewood Suites by Hilton Orlando Airport, where he managed 46 associates and all hotel operations. He began his hospitality career in 2007 as Task Force Support for Hilton Hotels, moving up to Operations Manager for Hampton Inn by Hilton in Melbourne and Orlando. Arancibia attended Florida International University, where he earned a Bachelor of Business Administration with a focus in Business Administration and Management.

During his leadership at Homewood Suites by Hilton, Arancibia led his team to achieve outstanding service scores which resulted in the property receiving Hilton’s highest honor: the  Connie Pride Award in Overall Hotel Performance for 2014, 2016 and 2017. He also guided the team into securing the top hotel for TripAdvisor City Ranking in Orlando.

With over 170 hotels now open in over 25 countries and territories around the world, Aloft Hotels, part of Marriott International, Inc., delivers a fresh approach to the traditional staid hotel landscape. For the ‘always on’ next generation of traveler, the Aloft brand offers a tech-forward, vibrant experience and a modern style that is different by design. For more information, please visit www.alofthotels.com and follow along on Facebook, Twitter, and Instagram. Aloft is proud to participate in Marriott Bonvoy, the new name of Marriott’s travel program replacing Marriott Rewards®, The Ritz- Carlton Rewards®, and Starwood Preferred Guest® (SPG). The program offers members an extraordinary portfolio of global brands, experiences on Marriott Bonvoy Moments and unparalleled benefits including earning points toward free hotel stays and nights toward Elite status recognition. To enroll for free or for more information about the program, visit MarriottBonvoy.marriott.com.

Headquartered in Tampa, FL, McKibbon Hospitality creates memorable hospitality experiences that inspire brand and property loyalty. It’s how we’ve grown into one of the largest (and most awarded) hotel management companies in the country. We operate dozens of hotels for Marriott, Hilton, Hyatt, IHG and other iconic hospitality brands. Our legacy is built on a foundation of integrity, anchored in how we value our guests, treat our associates and partners, and give back to our communities. Visit McKibbon.com to learn more.