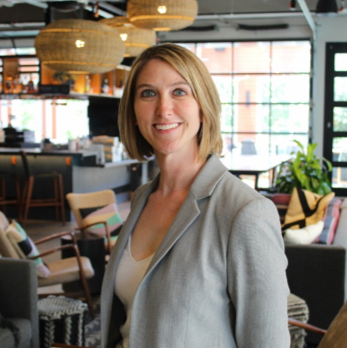 AUSTIN, TEXAS — Aug. 23, 2019 — White Lodging is pleased to announce Mindi Marshall as the dual general manager of the Aloft and Element Austin Downtown. In her new role, Marshall will oversee all operations at the dual-branded property, which is located in the heart of downtown Austin and opened in the summer of 2017.

Marshall was promoted from her role as assistant general manager of the same hotels, a position she has held since joining White Lodging in August 2018. During her time, she focused on building upon the legacy of service excellence and experience at the property. Mindi replaces David Meisner in this role. Meisner was recently named general manager of the new Marriott Austin Downtown, another White Lodging property with 613 rooms and on track to open in summer 2020.

“I am honored to have this opportunity to lead these great hotels,” said Mindi. “I look forward to continuing to work with this amazing team who inspire me with their passion and dedication.”

The Aloft Austin Downtown and Element Austin Downtown are proximate to the Austin Convention Center, the University of Texas at Austin campus and the Texas State Capitol Building. The hotels share amenities including Caroline Restaurant and the locally loved open-air urban backyard bar, Upstairs at Caroline. The property also features an oversized 24-hour fitness center and 1,380 sq. ft. of flexible meeting space.

Element Austin Downtown has light-filled studios as well as one-bedroom suites with modular furniture, flat-screen televisions, large desks with open shelving and custom-designed closets. Bathrooms are spa-inspired with a rain shower and dual-flush toilet. Rooms are outfitted with fully equipped kitchens and the signature Heavenly Bed. Amenities include the Element brand’s Bikes to Borrow program, breakfast and evening reception, as well as salon bar carts stocked with premium wines and beers, soft drinks and snacks, available after hours.

White Lodging, established in 1985, is one of the leading ownership, development, and management companies in America. An innovative trendsetter, the organization's portfolio includes convention, urban lifestyle, and suburban select hotels with more than $1 billion in managed revenue. White Lodging operates more than 90-premium hotels, 30 restaurants and 30 brands in 20 states. Success knows no boundaries at White Lodging, where associates and leadership have consistently earned superior guest satisfaction scores, top market share and industry-leading profit margins while recruiting the best, brightest, and most passionate professionals in every discipline for three decades. White Lodging is a proud winner of the Gallup Great Workplace Award. For more information about White Lodging, visit www.whitelodging.com, or connect on Facebook, Twitter, LinkedIn and Instagram.

With more than 125 hotels now open in nearly 20 countries and territories around the world, Aloft Hotels, part of Marriott International, Inc., delivers a fresh approach to the traditional staid hotel landscape. For the 'always on' next generation of traveler, the Aloft brand offers a tech-forward, vibrant experience and a modern style that is different by design. Aloft is proud to participate in the industry's award-winning loyalty program, Starwood Preferred Guest®. Members can now link accounts with Marriott Rewards®, which includes The Ritz-Carlton Rewards® at members.marriott.com for instant elite status matching and unlimited points transfer. For more information, please visit www.alofthotels.com and follow along on Facebook, Twitter, and Instagram.

Element® Hotels, part of Marriott International, Inc., is made to order for guests in the know and on the go. Its bright design defies convention, bathing guest rooms and public spaces in natural light. Stylish and sustainable throughout, Element offers extended stay comfort with a conscience and lots of signature amenities from its healthy RISE breakfast and RELAX evening reception to saline swimming pools, spacious fitness centers, bikes to borrow and electric vehicle charging stations. Element made history in 2008 as the only major hotel brand to pursue LEED certification for high-performance buildings brand-wide. Element is proud to participate in the industry's award-winning loyalty program, Starwood Preferred Guest®. Members can now link accounts with Marriott Rewards®, which includes The Ritz-Carlton Rewards® at members.marriott.com for instant elite status matching and unlimited points transfer. Visit www.ElementHotels.com or connect on Facebook and Instagram.