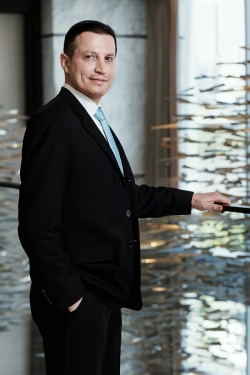 CHENGDU, China, Sept. 16, 2019- Wharf Hotels is pleased to announce the appointment of Michael Ganster as General Manager of contemporary chic hotel, Niccolo Chengdu, taking the helm of the group’s first luxury hotel, which opened in 2015.

Amplifying the strategies initiated by Adriano Vences, who successfully captained the hotel as its preceding General Manager for 4 years and has since taken up the leading role at The Murray, Hong Kong a Niccolo Hotel, the group’s flagship, Michael’s new remit is to lead the award-winning hotel in Chengdu, to new heights.

Originally from Austria, Michael has a wealth of hospitality experience spanning over 20 years at five-star properties with brands including Hilton, Raffles International, Dusit International and Fairmont Hotels, during which he played host to multiple Heads of State, royalty, dignitaries, celebrities and artists whilst overseeing hotels in China, Europe, Middle East, Thailand, the United Kingdom and the United States.

A graduate from the renowned Hotel & Tourism Business College at Castle Klessheim in Salzburg, Austria, Michael was most recently General Manager of Fairmont Beijing for 7 years. Wharf Hotels President, Dr Jennifer Cronin welcomes Michael into the Niccolo Hotels family saying, “We are delighted that Michael has joined such an important hotel within our group. As our group’s first luxury property within the Niccolo collection, Michael’s global perspective, local savviness and strategic mindset will undoubtedly continue to raise the bar in Niccolo Chengdu’s leadership position, market share and guest experience. We look forward to celebrating many more successes ahead.”

“I wish to bring new creative ideas and services to Niccolo Chengdu, showcasing the city’s sophisticated local culture to our captains of industry and leaders in style enabling us to inspire our guests at every encounter,” said Michael in accepting his new role.

At leisure, Michael enjoys the outdoors, plays tennis and is a passionate scuba diver.

Niccolo is a collection of four contemporary chic hotels inspired by luxury fashion, all with desirable, highly prized addresses. Underpinning the brand is the desire to make life effortlessly luxurious for guests. At heart, as discoverers and re-discoverers of luxury experiences, styles and tastes, Niccolo Hotels are modern sophisticated spaces. The Murray, Hong Kong, a Niccolo Hotels, opened in January 2018 as the brand's flagship, with one new Niccolo hotel currently under development in Suzhou, China, following successful openings in Chengdu, Chongqing, Hong Kong and Changsha. Further details are available at niccolohotels.com.

Ultratravel Collection brings together hotels of distinction for the discerning traveller. Its membership is reserved for the very best hotels and resorts in the world - genuinely luxurious and iconic properties that deliver the finest service and personalised guest experiences. Member hotels share an integrated global platform for guest recognition and loyalty rewards, the DISCOVERY programme from partner Global Hotel Alliance, as well as beneficial relationship with the multi-media brand Ultratravel, the other founding partner of Ultratravel Collection. For more information visit ultratravelcollection.com