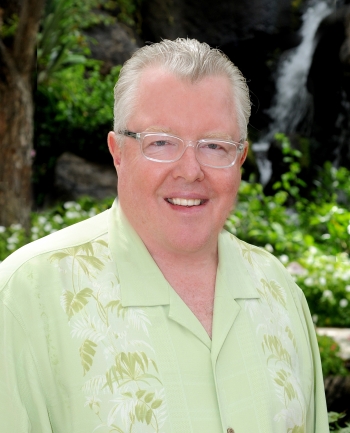 HONOLULU, HI. (November 22, 2022)–Waikiki Beach Marriott Resort & Spa today announces the appointment of Jerry Gibson as general manager of the reimagined oceanfront resort, which last year completed a multi-million-dollar transformation. Gibson joins the team at an exciting time as the resort prepares to debut its newly rebranded Crown Suite collection and accompanying experiences that will invite guests to rediscover the landmark Oahu property in 2023.

“As a veteran of Hawaii’s unique hospitality industry with over four decades of experience, Jerry is an invaluable addition to our team who understands Hawaiian culture and its role and influence on the guest experience,” said Jon Kimball, market vice president, Marriott Hotels & Resorts in Hawaii & French Polynesia. “Our team–as well as our guests–are already reaping the benefits of Jerry’s leadership. We are honored to welcome him to our ohana.”

Joining the Waikiki Beach Marriott team is a homecoming for Gibson, who began his hospitality career with Marriott Hotels over 40 years ago. Gibson quickly ascended through the company ranks and eventually became one of the youngest general managers in Marriott history before accepting a position with Hyatt Hotels Corporation. Gibson served as general manager for several Hyatt hotels and resorts in major destinations around the United States, including Las Vegas, New York, Columbus, Chicago and Kauai. After spending 28years with the company during which he became area vice president for Hyatt hotels in Chicago, Gibson returned to Hawaii to accept the role of area vice president for Hilton Hotels in Honolulu. While working for Hilton, Gibson was responsible for all 23Hilton and 12 timeshare properties in Hawaii, Arizona, Las Vegas and North West Passage including two of the largest properties in the Hilton portfolio: Hilton Hawaiian Village and Hilton Waikoloa. Gibson later transitioned to spearhead the redevelopment of Turtle Bay Resort on the North Shores of Oahu, where he served as vice president with BRE Hotels & Resorts.

Since moving to Honolulu in 2008, Gibson has been a prominent leader in Hawaii’s tourism sector, serving Hawai‘i Lodging & Tourism Association, Hawai‘i Hotel Owners Roundtable, Hawai‘i Visitors & Convention Bureau, Honolulu Festival Foundation, and UH Hotel School Advisory Board. Most recently Gibson founded and is now CEO of the Hawaii Hotel Alliance featuring the largest hotel association in Hawaii with over 30,000 rooms. Gibson is devoted to serving his local community and has helped fundraise millions of dollars for Oahu’s homeless population and survivors of natural disasters. He is a graduate of the University of Massachusetts. He is also currently serving as the vice chairperson of the Honolulu Police Commission.

With over 580 hotels and resorts in over 60 countries and territories around the world, Marriott Hotels is evolving travel through every aspect of the guest's stay, helping to relax, clear minds, stimulate new ideas and anticipate travelers’ needs, leaving them inspired to reach their full potential. Boldly transforming itself for mobile and global travelers who blend work and play, Marriott leads the industry with innovations, including the Great room lobby and Mobile Guest Services that elevate style & design and technology. To learn more, visitwww.MarriottHotels.com. Stay connected to Marriott Hotels on Facebook, @marriott on Twitter and @marriotthotels on Instagram. Marriott Hotels is proud to participate in Marriott Bonvoy, the global travel program from Marriott International. The program offers members an extraordinary portfolio of global brands, exclusive experiences on Marriott Bonvoy Moments and unparalleled benefits including free nights and Elite status recognition. To enroll for free or for more information about the program, visit MarriottBonvoy.marriott.com.