In 2017, the actual achieved levels of occupancy, average daily rate (ADR), total revenue and profits for U.S. hotels were less than their respective budgeted amounts. After a five-year period (2011 through 2015) of extremely accurate budget projections, this marks the second consecutive year that owners and operators failed to meet their operating goals.

As general managers, controllers, and directors of sales begin the process of preparing their budgets and marketing plans for 2019, we present the results of our most recent look at the budgeting accuracy of U.S. hotel operators. From CBRE Hotel’s Americas Research’s Trends® in the Hotel Industry database, we identified 722 operating statements that contained both actual and budgeted data for 2017. Using these statements, we compared the revenues, expenses, and profits projected for 2017 with what was actually earned and spent during the year. For the purpose of this analysis, profits are defined as earnings before interest, taxes, depreciation and amortization (EBITDA).

For 2017, the hotels in our sample budgeted for a 3.2 percent gain in total operating revenue. Unfortunately, total revenue growth amounted to just 1.7 percent for the year. Since rooms revenue made up 63.8 percent of total revenue for the year, it was the budget deficiencies in occupancy and ADR that were the primary causes of the revenue shortfall.

Given the continued growth in lodging demand since the recession in 2009, it is not surprising that the hotels in our sample budgeted for another 0.8 percent increase in occupancy from 2016 to 2017. Unfortunately, these same hoteliers did not enjoy the occupancy gain they had hoped for. In 2017, the hotels in our study sample suffered a 0.1 percent decline in occupancy.

Another indication of weaker than expected market conditions was the sluggish growth in ADR. The properties in our study sample were able to achieve a 1.8 percent gain in ADR during 2017, however, this was less than the forecast growth rate of 2.5 percent. Combined, the decline in occupancy and slow ADR growth rate resulted in a rooms revenue gain (1.7%) that was nearly half the budgeted growth rate of 3.3 percent.

By accommodating fewer rooms than budgeted, the hotels in our sample did incur less expense growth than planned. During 2017, expenses at the properties in the study sample increased by 2.3 percent. This is 0.3 percentage points less than the budgeted expense growth rate of 2.6 percent.

Muting the benefit of the lower accommodated room count was an apparent increase in the cost of servicing guests. Expenses on a dollar-per-occupied room (POR) basis grew by 2.4 percent. This compares unfavorably to the budgeted increase in expenses POR of 1.8 percent. The 0.6 percent overage in budgeted expenses POR indicates that the costs and prices for labor, supplies, goods sold, and services were greater than expected.

Unfortunately for hoteliers, controlling expense growth was not enough to overcome the revenue shortfall. With total revenue growing at 1.7 percent, and expenses rising 2.3 percent, profits at the hotels in the sample remained the same from 2016 to 2017. This is well short of the budgeted 5.0 percent growth rate for EBITDA.

Both the limited and full-service properties in our sample fell short of their respective budgeted revenue and profit goals. However, the deficiencies were greater for the limited-service hotels.

Full-service properties also fell short of their budgeted profit growth in 2017. These hotels projected an EBITDA gain of 4.8 percent for the year. Unfortunately, the actual achieved gain was just a slight 0.2 percent.

According to the June 2018 edition of Hotel Horizons®, CBRE Hotels’ Americas Research is projecting that a 2.6 percent increase in RevPAR will lead to a 2.5 percent gain in total hotel revenues during 2019. Concurrently, operating expenses are forecast to rise by 1.9 percent, leading to an improvement in profits of roughly 3.5 percent.

After two years of budget shortfalls, it will be natural for operators to be more conservative when preparing their estimates for 2019. Conversely, owners see record occupancy levels, and wonder why their operations are not capable of generating greater cash flows, thus putting upward pressure on expectations. It is hoped that these two opposing perspectives will settle on a budget that is close to reality. 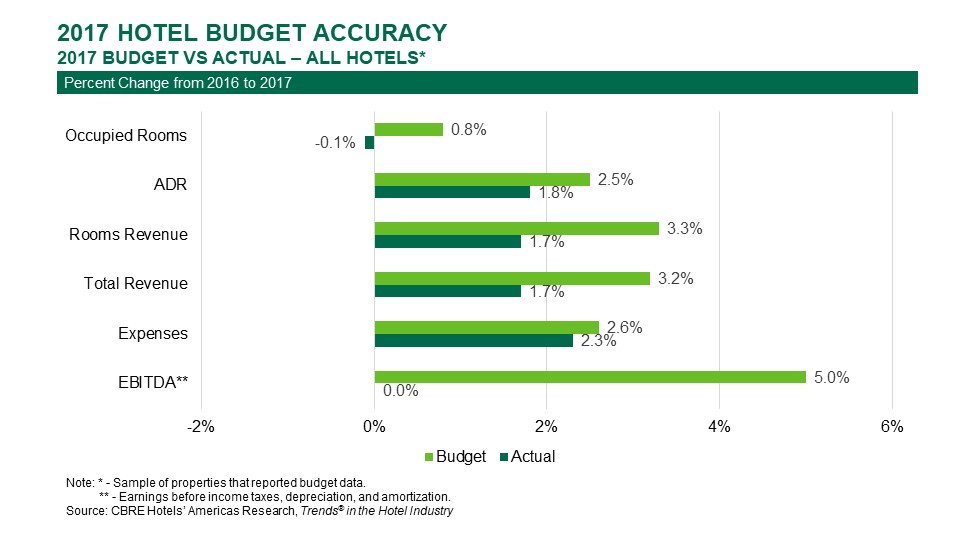 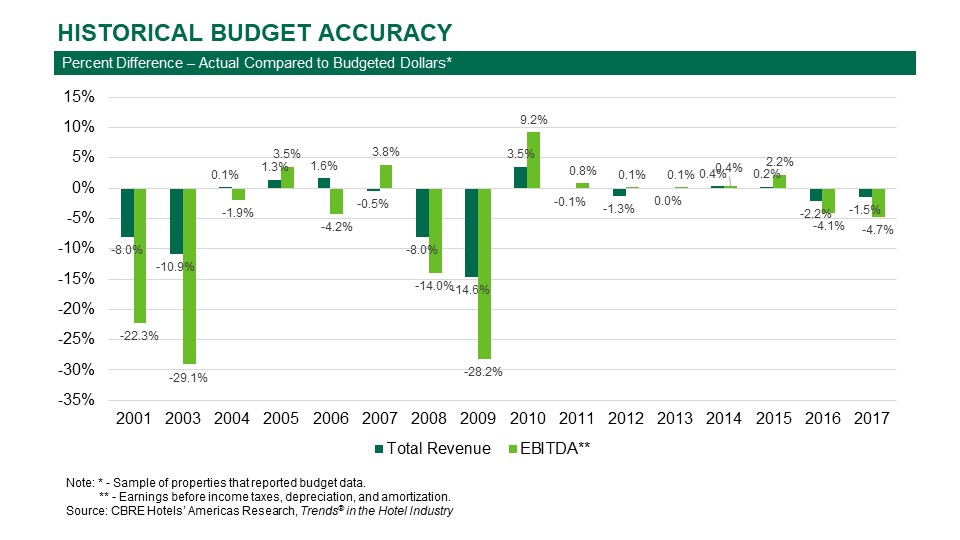 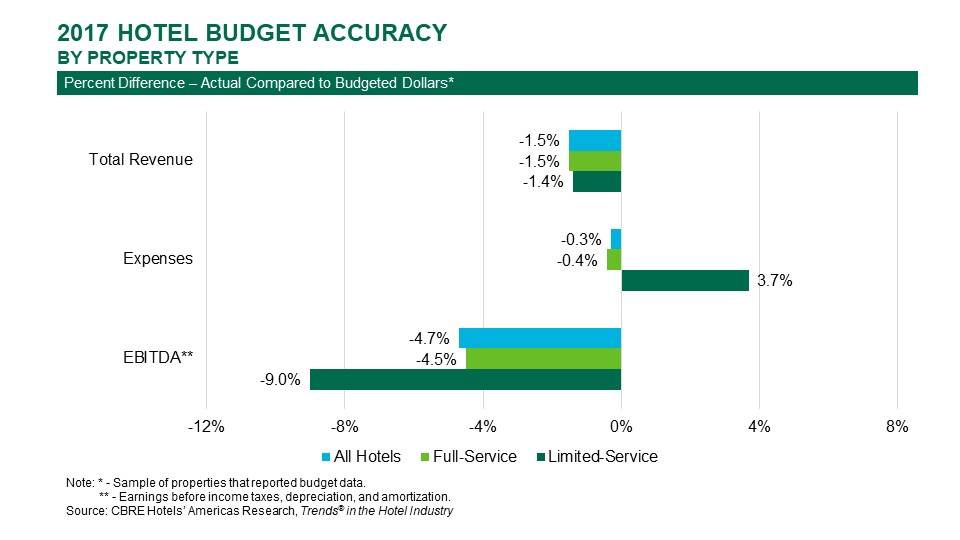 Robert Mandelbaum is Director of Research Information Services for CBRE Hotels’ Americas Research.  CBRE offers hotel managers several tools and reports to assist them in the preparation of their 2019 budgets.  For more information, please visit pip.cbrehotels.com, or call (855) 223-1200.  This article was published in the September 2018 edition of Lodging.