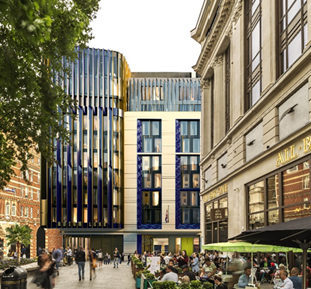 After seven years and a £300 million (≈$385 million) investment, The Londoner, the world’s first super boutique hotel, will open its doors in June 2020. The property will take centre stage on London’s Leicester Square and is the latest project by Edwardian Hotels London. The project is a feat of design, architecture and engineering that aligns with the vision of Edwardian Hotels London’s Founder and Chairman, Mr Jasminder Singh to create “a celebration of London; its history, aesthetic and people.” Its 16 storeys will incorporate 350 guest rooms, suites and a tower penthouse with panoramic views, two private screening rooms, a mix of six concept eateries – including bars and a tavern, alfresco dining on the ground floor and a contemporary Japanese lounge bar with a rooftop terrace and fire pit – plus an expansive ballroom suited for any occasion, a variety of meeting spaces and a results-driven gym and spa.

Rob Steul said: “From inception, Edwardian Hotels London saw the building as more than a hotel and sought to create an ‘urban resort’ destination of the highest architectural quality. From the wellness space below, to an extraordinary rooftop terrace overlooking Trafalgar Square, we developed a central core of meeting, eating, lounging and event spaces running vertically through the building around which wrap the guest rooms.” He continued: “It is essentially two buildings intertwined – with the interplay between them creating a dynamic guest experience. Working closely with City of Westminster planners, we carefully considered the urban context of the site and responded with a building which fits its context in both massing and materiality.”

Nik Karalis, CEO of Woods Bagot comments, “The design of the Londoner is directly a result of its location in the historic theatre district. A spatial journey that takes the guest and local Londoners through both the subterranean, street level and connected visually through to the roof top. Along with several enthralling episodes of experience and interaction all not to be missed.”

Engineers Arup Associates provided expertise across 16 different disciplines, from mechanical, electrical and public health to fire, acoustics, vertical transportation, accessibility and façade engineering. Due to urban planning height restrictions, the architects proposed a 30-metre subterranean series of spaces on six levels, creating the deepest habitable basement in London and among the deepest in the world – a factor that presented a number of architectural, structural and engineering challenges for the teams involved. In order to reach down to the depths required, an excavator had to be specially designed and made by construction company McGee Group, who built the basement and building superstructure.