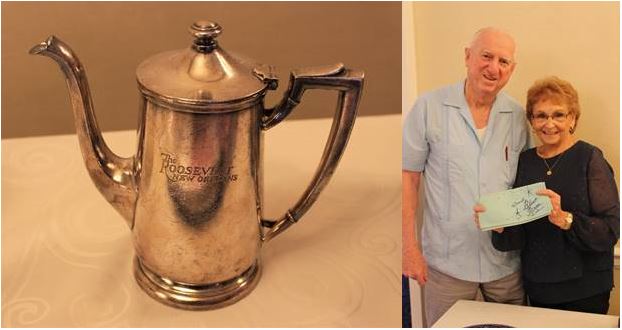 Left: The winner of the Historical Giveback Contest, Leigh Guglielmo, retuned a historic coffee pot. Right: The Carlos Family holds a napkin they “returned” as entry into the giveaway.

In celebration of its 125th anniversary, hotel held “giveback” contest and drew for grand prize winner

NEW ORLEANS – (Sept. 6, 2019) – The Roosevelt New Orleans, A Waldorf Astoria Hotel, is excited to announce Leigh Guglielmo, a New Orleans local, as the winner of its Historical Giveback Contest in honor of the hotel’s 125th anniversary. Guests were encouraged to bring in any and all items they took from the hotel in the past. The deadline to return an item was July 1. Guglielmo has won a seven-night stay in a Presidential Suite, private dinners cooked by the hotel’s executive chef, spa experiences and more. More than 70 items were returned as part of the contest.

“I really want to thank everyone that’s from this area for celebrating with us for the last 125 years,” said General Manager Tod Chambers. “We’ve always felt responsible here to make this hotel the hotel for the city of New Orleans. We’re excited about our future and want everyone to feel welcome in their second home.”

The contest received national attention, and the hotel received a unique array of items, including:

Additional details with photos and descriptions on returned items can be found here.

Waldorf Astoria Hotels & Resorts is a portfolio of nearly 30 iconic properties that create a unique sense of place with a relentless commitment to personal service and culinary expertise in landmark locations around the world. Unified by their inspirational environments and True Waldorf Service, Waldorf Astoria hotels deliver graceful service from the moment a guest books through checkout. Waldorf Astoria is a part of Hilton, a leading global hospitality company. Experience Waldorf Astoria by booking at www.waldorfastoria.com or through the Hilton Honors mobile app. Learn about the brand by visiting news.waldorfastoria.com, and follow Waldorf Astoria on Twitter, Instagram and Facebook.

Hilton (NYSE: HLT) is a leading global hospitality company, with a portfolio of 14 world-class brands comprising more than 5,300 properties with more than 863,000 rooms, in 106 countries and territories. Hilton is dedicated to fulfilling its mission to be the world’s most hospitable company by delivering exceptional experiences – every hotel, every guest, every time. The company's portfolio includes Hilton Hotels & Resorts, Waldorf Astoria Hotels & Resorts, Conrad Hotels & Resorts, Canopy by Hilton, Curio Collection by Hilton, DoubleTree by Hilton, Tapestry Collection by Hilton, Embassy Suites by Hilton, Hilton Garden Inn, Hampton by Hilton, Tru by Hilton, Homewood Suites by Hilton, Home2 Suites by Hilton and Hilton Grand Vacations. The company also manages an award-winning customer loyalty program, Hilton Honors. Hilton Honors members who book directly through preferred Hilton channels have access to instant benefits, including a flexible payment slider that allows members to choose exactly how many Points to combine with money, an exclusive member discount that can’t be found anywhere else, and free standard Wi-Fi. Visit newsroom.hilton.com.