Marriott’s Arne Sorenson and STR’s Randy Smith to Be Inducted into U.S. Travel Hall of Leaders

Home/Marriott’s Arne Sorenson and STR’s Randy Smith to Be Inducted into U.S. Travel Hall of Leaders

Marriott’s Arne Sorenson and STR’s Randy Smith to Be Inducted into U.S. Travel Hall of Leaders 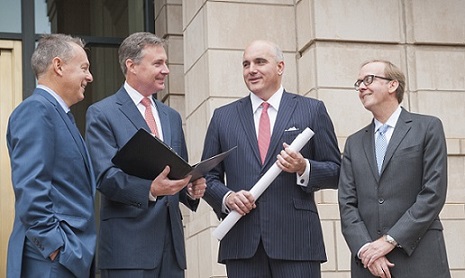 WASHINGTON (July 28, 2017)—Longtime industry leaders Arne Sorenson and Randy Smith have been selected as the 2017 inductees into the U.S. Travel Hall of Leaders, the single highest and most revered honor an individual in the travel community can receive.

Sorenson, president and CEO of Marriott International and current Chairman of U.S. Travel's CEO Roundtable, and Smith, co-founder and chairman of data and analytics firm STR, will be honored during a November 14 dinner among more than 100 industry leaders at U.S. Travel's fall board meeting in Washington, D.C.

"Beyond leading two outstanding organizations focused on economic growth and job creation through travel, Arne and Randy have been vocal advocates for the industry for several decades," said U.S. Travel President and CEO Roger Dow.

"Arne not only oversees one of the leading travel brands, but he is investing his time and expertise to promote the industry via the media and through his involvement in Brand USA. Randy created a data research company that has been the industry standard for measuring the health of the hotel economy over the past three-plus decades, and advanced the industry through active participation in various associations.

"This is well-deserved recognition, and we'll have a lot to celebrate when the travel community honors them in November."

Sorenson joined Marriott in 1996. He became the third CEO in the company's history in 2012—and the first without the Marriott surname. After Marriott's acquisition of Starwood Hotels & Resorts last year, more than 675,000 people wear a Marriott name badge at managed and franchised hotels worldwide.

Sorenson currently is a member of the board of Brand USA, serving as treasurer and chairman of its Finance Committee after having previously served as chairman of the board. Sorenson also served as vice chair of the President's Export Council under President Barack Obama, helping raise the visibility of the travel industry with multinational CEOs and leaders at the highest levels of our government.

Smith's contributions to the industry have been recognized with numerous awards, most recently when he was honored with the HSMAI 2016 Albert E. Koehl Lifetime Achievement Award. He is a member and past chairman of the IREFAC and past vice chairman of the American Hotel and Lodging Association Foundation Funding Committee.

OTO Development, a Johnson Management company, is an award-winning, fast-growing hotel development and management company. Founded in 2004 and partnering with the Hilton, Hyatt and Marriott brands, OTO's industry leadership position is anchored by a portfolio of excellent hotels staffed by exceptional people. The company has developed more than 70 hotels over the past 13 years while also adding to its list of managed properties, which now comprise approximately 8,600 room keys. Today, OTO's impressive growth is focused on new urban development projects in San Francisco, Los Angeles, San Diego, Manhattan and Washington DC as well as increasing emphasis on adding new management contracts with clients ranging from publicly traded REITs to private equity firms to high net worth individuals. For more information, visit OTODevelopment.com.