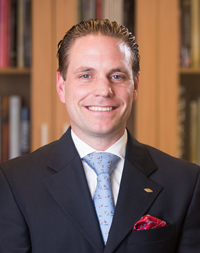 Boston, 18 May 2017 – Five-Star Mandarin Oriental, Boston is delighted to announce the appointment of Philipp C. Knuepfer as General Manager.

With over 15 years of global hospitality experience, Mr. Knuepfer began his career with Kempinski Hotels in his native Germany. Joining Mandarin Oriental Hotel Group in 2002 at The Kahala Mandarin Oriental, Hawaii, Philipp gained significant managerial experience in a variety of the Group’s properties in and around Asia and throughout the U.S.

“Philipp brings a wealth of knowledge and brand expertise to the Boston team,” said Jan D. Goessing, Executive Vice President, Operations Director – The Americas. “We are extremely confident that his leadership and invaluable insight will ensure Boston’s continued success.”

Originally from Bonn, Germany, Philipp attended the International School for Hotel & Catering Business in Munich, where he earned his degree in Hotel Management. He has also earned certificates in Hospitality Management at Cornell University and an MBA from RMIT University in Melbourne, Australia.