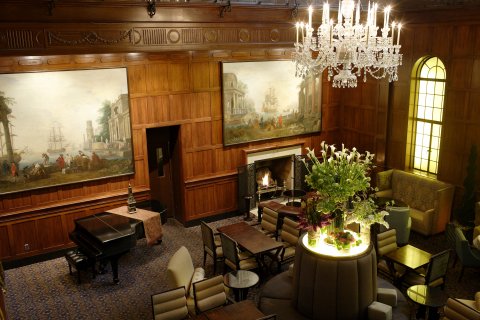 December 19, 2014 – BETHESDA, Md. – LaSalle Hotel Properties (NYSE: LHO) today announced that it acquired The Heathman Hotel in Portland, Oregon for $64.3 million. The Company funded the acquisition with cash on hand.

Surrounded by corporate and leisure demand generators, the 150-room hotel is located at 1001 SW Broadway Street in the heart of downtown Portland among the city’s concentration of office towers, retail offerings, dining establishments and entertainment venues. The hotel’s location within Portland’s central business district places its guests within a short walk of several regional corporate headquarters including those of Wells Fargo Bank and Charles Schwab. The property is located adjacent to the Portland Center for the Performing Arts and next door to its Arlene Schnitzer Concert Hall, which houses the Oregon Symphony. The Heathman Hotel is also one block from the flagship store for Columbia Sportswear and within a short walk of Nike’s flagship location. The hotel’s guests are able to walk to many other attractions, including the Portland Art Museum, Pioneer Place Mall, the Pearl District, and the acclaimed Powell’s City of Books. Local academic institutions include Portland State University, which is just a few blocks away from The Heathman Hotel and Oregon Health & Science University, which is within 2.5 miles.

“We are very excited about the acquisition of this special historic asset,” said Michael D. Barnello, President and Chief Executive Officer of LaSalle Hotel Properties. “The Heathman Hotel is optimally located within an excellent market. Portland boasts a diverse economy, cultural sophistication and an abundance of amenities and attractions for its visitors.”

Downtown Portland has boasted strong growth over the past several years.

The Heathman Hotel is an historic property, constructed in 1927. The asset has been well maintained, with $6.0 million invested from 2008 to present. The Company has underwritten approximately $3.0 million of capital investment in 2017 for a soft goods renovation.

The hotel’s 150 guestrooms average 411 square feet and include 40 suites. The property has 3,833 square feet of meeting space, with the capability to accommodate receptions of up to 200 guests and seated banquets of up to 150 guests. The property has received consistent accolades with inclusion on Conde Nast’s 2014 “List of the Best Hotels in the Pacific Northwest”, Travel + Leisure’s “Top Hotels List” and “Best Hotels of 2014” by U.S. News and World Report, among several other awards. The Heathman Hotel has also garnered fame for being showcased in the popular novel, “Fifty Shades of Grey.”

The Heathman Restaurant & Bar, the hotel’s signature dining outlet, serves locally sourced fare, including free-range meats from Oregon farms and wild-caught seafood from the waters of the Pacific Northwest. The historic Tea Court Lounge is an original feature of the hotel. The lounge’s warm décor includes firelight from a marble fireplace and the outlet features live jazz from Wednesday to Saturday night. Both the Heathman Restaurant & Bar and Tea Court Lounge are operated under a lease by a major third-party operator. The hotel’s catering and room service are also operated by a third-party under a service agreement.

The property also leases a retail space to Cacao Chocolates, a high-end craft chocolate shop located adjacent to the hotel’s lobby on the corner of Broadway and Salmon Streets.

The Library is a space located on the mezzanine level and contains a collection of over 2,500 signed books authored by Nobel and Pulitzer Prize winners, U.S. Poet Laureates and two U.S. Presidents. The collection is accessible Monday through Thursday between 5:00 and 7:00pm, along with complimentary wine.

The Heathman Hotel was purchased fee simple. The asset will be managed by JRK Hotel Group, which also manages The Roger in Manhattan and Villa Florence in San Francisco on behalf of the Company.