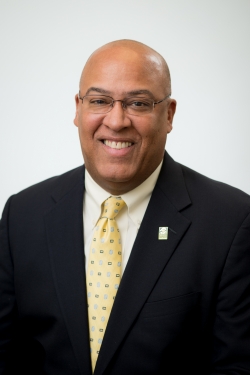 The Conti Professorship Program was established in 1987 by alumni and friends of the Penn State School of Hospitality Management to honor alumnus Walter J. Conti for his contributions to the school, Penn State, and the hospitality profession. Industry leaders have served as Conti Visiting Professors each year since 1988.

“Walter Conti was a great mentor to me after I met him as a young hospitality professional in 1983. I am thrilled and honored to be selected as a visiting professor in honor of Walter J. Conti. Penn State alumni have their successful fingerprints all over our great industry, and for me to be associated with the many icons that have served as Walter J. Conti visiting professors is really special.”

With over 40 years of industry experience, Fernandez founded and serves as president of the Multicultural Foodservice and Hospitality Alliance (MFHA), an educational non-profit organization that connects and advocates for the business benefits of diversity and inclusion in the restaurant, foodservice, and lodging industry. The organization is the first that works to bring about a national discussion on diversity management in hospitality.

“I look forward to working with Dr. Quadri-Felitti and her team in SHM to make my live or virtual visit to campus a fun and thought provoking one.”

Donna Quadri-Felitti, Marvin Ashner Director of the School of Hospitality Management is thrilled to have Fernandez share his insights with students and faculty members.

“Gerry has been a friend of our program and we are delighted that he has accepted our most prestigious appointment to the distinguished collection of executives in the Conti Professor Society, particularly as the urgency and advocacy to change racial inequities have accelerated after the death of George Floyd. We are grateful for Gerry’s commitment to Penn State students and the SHM community of alumni and scholars, amid his contributions to broader change in the industry and society.”

Fernandez has held leadership positions at a number of recognized hospitality companies, including The Waldorf-Astoria Hotel, Hemenway’s Seafood Grill & Oyster Bar, the Capital Grill. He also worked as a national account manager at General Mills, where he first started his work in diversity and inclusion. After attending the 1995 Women’s Service Forum, Fernandez recognized the need to promote opportunities for people of color in the industry, as the conference was doing for women.

He has been featured on the Nation Restaurant News’ “Power List” 2014 and “50 Power Players” 2000, which features the 50 most powerful people shaping the restaurant industry each year. He is also an honorary Board member of the Rhode Island Community Foodbank and has served as a trustee at Johnson & Wales University. He has received the Rainbow/P.U.S.H Coalition’s Reginald Lewis Trailblazer Award, the Black Culinary Alliance Heritage Award, and the Herman G. Rusch Humanitarian Award from the American Culinary Federation.

Fernandez holds a bachelor’s degree in foodservice management from Johnson & Wales University, where he also earned a culinary arts degree, and an honorary doctorate in business administration.

Walter J. Conti, a Penn State trustee emeritus, died in 2016 at the age of 87. He served on the Penn State Board of Trustees from 1974 to 1992. After graduating with his bachelor’s degree in home economics from Penn State in 1952, he went on to becoming a well-known restaurateur and industry leader.

Established in 1937, Penn State’s School of Hospitality Management is one of the nation’s oldest and most respected schools of hospitality management. Its top-ranked undergraduate and doctoral programs prepare global leaders with a rigorous, diverse curriculum focused, since its inception, on engaged scholarship, featuring partnerships with Penn State's Hospitality Services, Housing and Food Services, and top global hospitality brands. It’s also home to the oldest Penn State alumni program group, the Penn State Hotel & Restaurant Society. For more information about the school, contact Brian Black, director of industry and alumni relations, at [email protected] or 814-865-1853.