Home/Construction to Begin on The Brenton Hotel in Newport, Rhode Island 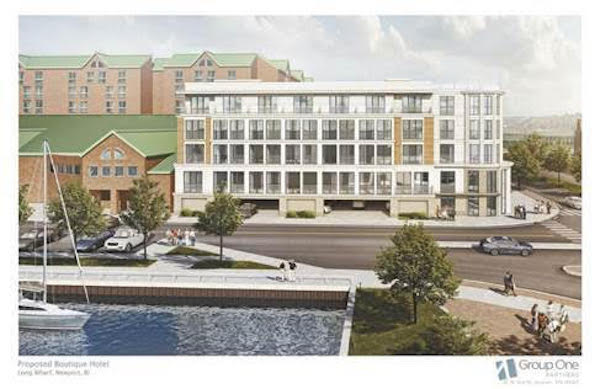 NEWPORT, RI (March 20, 2019) – The first major milestone in the construction of Newport’s newest luxury boutique hotel, the Brenton Hotel, took place yesterday as demolition began of the current two-story building at 31 America’s Cup Avenue. Construction of the new 57-room hotel will begin upon completion of the demolition.

The Brenton Hotel will debut in spring 2020 at the prime location along the waterfront on the corner of America’s Cup Avenue and Long Wharf, adjacent to the Newport Visitor Information Center and the Newport Marriott Hotel.

Owned by LWH, LLC, a locally based investment group, and operated by White Horse Hospitality also of Newport, the Brenton Hotel will be a five-story structure with parking on the ground floor and four floors above for public space and guest rooms. The development team worked closely with City and State officials and the Newport Historic District Commission to ensure the contemporary architectural design details of the hotel are consistent with Newport’s historic character.

The hotel’s 57 guestrooms and suites will have floor-to-ceiling windows and elegant design and décor features such as king-sized beds that “float” in the middle of guestrooms. Additional amenities include on-site parking, dining and social areas, and leading edge hospitality technology.

LWH is controlled by Farrar Equities, a Newport-based hospitality company which also owns the Mill Street Inn and White Horse Tavern, and Crosspoint Associates, which owns and manages various commercial properties throughout New England, including the Aquidneck Shopping Center in Middletown, RI.

The architect for the project is Group One Partners in Boston, MA. Newport-based Behan Brothers are general contractors for the development.

The hotel is named in honor of the iconic Brenton Reef at the entrance to Narragansett Bay, near the site where the America’s Cup races were contested for 113 years. Brenton Point State Park, where Narragansett Bay meets the Atlantic Ocean midway along renowned Ocean Drive, provides one of the most commanding and spectacular views on the East Coast.