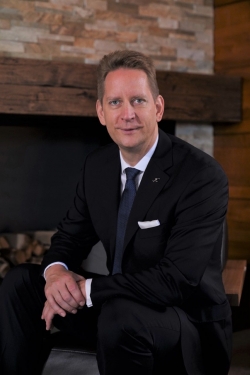 Christian Ruge started his career at Hotel InterContinental Frankfurt in Germany, where he held various leadership positions in Front Office. In 2001 he moved to Hotel InterContinental in New York as Assistant Manager returning in 2003 back to Germany to take on the role of Assistant Front Office Manager at Hotel InterContinental Berlin and Revenue Manager at Hotel Le Meridien Munich. His career path continued with a change to the French luxury hotel brand Sofitel, with which he spent over eight years, working for Sofitel Munich Bayerpost in Germany, Sofitel Wroclaw Old Town in Poland and Sofitel Winter Palace Luxor in Egypt. In 2012 he joined the Kempinski family as Hotel Manager of Kempinski Hotel Airport Munich followed by a promotion to General Manager of Kempinski Hotel Taiyuan in China. In 2017 Christian Ruge moved to the United Arab Emirates as General Manager of Kempinski Hotel Ajman. His last appointment before arriving at Kempinski Hotel Grand Arena Bansko was the position of General Manager of Burj Rafal Hotel Kempinski in Riyadh, Saudi Arabia.

Christian Ruge holds a Master of Business Administration of the University of Wales and is certified in Rooms and Strategic Management by Cornell University. He is a German national and, in addition to his mother tongue, speaks fluent English and conversational Spanish and French.Christian Ruge is taking over his new position from Natalia Kashirskaya, who served as General Manager of the most awarded hotel in Bulgaria during the last two years.

Like all hotels of the luxurious European hotel group, Kempinski Hotel Grand Arena Bansko is a member of the Global Hotel Alliance (GHA), the world’s largest alliance of independent hotel brands, and offers various benefits to members through the Kempinski Discovery Loyalty Programme.

Being the only ski-in and ski-out hotel in the area, Kempinski Hotel Grand Arena Bansko is located in the very heart of the most popular and vibrant winter resort in the Balkans – Bansko, right across from the Gondola lift station, which gives access to 75 km of ski runs groomed at a high international level, suitable for all skiers, from complete beginners to advanced ones. The luxury hotel is the only international branded winter resort in this part of the Balkans and is open year-round. It features 157 Alpine-style rooms, including 26 suites and an exclusive Presidential Suite, fully renovated Kempinski The Spa with brand-new and unique thermal facilities, four conference rooms and eight restaurants and barswith spectacular views of the majestic Pirin Mountains. Graced with European flair, the hotel grants the ultimate Kempinski ski, gourmet and spa experience.

Created in 1897, Kempinski Hotels is Europe’s oldest luxury hotel group. Kempinski’s rich heritage of impeccable personal service and superb hospitality is complemented by the exclusivity and individuality of its properties. Kempinski now manages a portfolio of 78 five-star hotels and residences in 34 countries and continues to add new properties in Europe, the Middle East, Africa, Asia and the Americas. Each one reflects the strength and success of the Kempinski brand without losing sight of its heritage. The portfolio comprises historic landmark properties, award-winning urban lifestyle hotels, outstanding resorts and prestigious residences. Each one is imbued with the quality guests have come to expect from Kempinski while embracing the cultural traditions of its location. Kempinski is a founding member of the Global Hotel Alliance (GHA), the world’s largest alliance of independent hotel brands.