CBRE Hotels Research forecasts that supply will peak at a 2.0 percent gain in 2018 and then stabilize at the long-run average of 1.9 percent for the next two years. Further, the number of projects entering all phases of the development pipeline is declining.

“On a broad national basis, the supply increases have been surpassed by lodging accommodation demand growth for the past eight years, and this trend is forecast to continue through 2019,” said R. Mark Woodworth, senior managing director of CBRE Hotels’ Americas Research. “However, when you look at the projected 2019 performance of the 60 major U.S. markets in our Hotel Horizons® universe, you can clearly see the impact of new lodging supply at the local level.”

For 2019, CBRE is forecasting a very slight (0.02 percent) increase in the nation’s occupancy level. Conversely, occupancy is forecast to decline in 47 of the 60 Horizons markets covered by CBRE. A primary difference among markets gaining occupancy and those losing it: anticipated levels of new supply. The 47 markets forecast to register declines in occupancy in 2019 will see an average 3.8 percent gain in supply from new rooms. The 13 anticipated to gain occupancy will see only 2.5 percent supply growth.

“Not only does the change in supply affect the outlook for local market occupancy levels, but it impacts hoteliers pricing power, as well,” Woodworth said, explaining that supply growth often leads to shrinking gains in pricing. For 2019, the 47 markets forecast to experience a decline in occupancy are projected to achieve an increase in average daily rate (ADR) of 2.1 percent. The ADR gain is expected to be larger – 2.5 percent – for the 13 markets forecast to see occupancy increases next year.

Combining the expected changes in occupancy and ADR, the 2019 forecast RevPAR growth for the 47 occupancy declining markets is 1.2 percent, well short of the 2.9 percent RevPAR increase forecast for the 13 others.

While the trajectory of occupancy levels is pointing downward for the majority of markets, the occupancy levels still are forecast to be at, or near, all-time record highs. Unfortunately, despite the lofty occupancy levels, the changes in ADR for both the nation, as well as the 60 Horizons markets, are forecast to be below their respective long-run averages in 2019. “Economic theory would suggest that eight years of demand growth, leading to four consecutive years of record occupancy levels, should provide significant pricing leverage for hotel operators,” said John B. (Jack) Corgel, Ph.D., professor of real estate at the Cornell University School of Hotel Administration and senior advisor to CBRE Hotels’ Americas Research. “Unfortunately, this has proven to be a paradox for hoteliers as our forecasts call for ADR growth levels to remain below the 3.0 percent long-run average for the foreseeable future.

“By definition, a paradox is contradictory or hard to explain, and that has been the case with the limited ADR growth. We have analyzed a variety of factors that appear to have impaired growth in ADR to varying degrees, but no single issue stands out as the dominant culprit. Once again, depending on the market, it could be any combination of supply growth, short-term rentals and other forces that encourage hotel managers to favor higher occupancies over higher room rates,” Corgel said. “Further, given the continued rise in profits the past few years, we are examining the traditional notion that profit growth is higher when the mix of ADR and occupancy in the RevPAR calculation is overweighed in ADR.”

“The correlation between the health of the economy and the performance of the lodging industry has long been established. In fact, it is the positive outlook for the nation’s economy in 2019 that explains our baseline forecast for continued growth in U.S. lodging demand,” Woodworth said. “However, like any forecast, there is the potential for actual outcomes to vary from projections. Accordingly, we provide our clients with multiple lodging forecasts based on five different economic forecast scenarios.”

CBRE’s baseline national economic forecast results in a projected1.9 percent increase in lodging demand, along with a 2.6 percent gain in ADR for 2019. Under CBRE’s ‘downside’ economic scenario, the demand forecast changes to a decline of 0.6 percent and an ADR drop of 0.3 percent. However, should the economy improve beyond expectations, lodging demand could rise by 3.8 percent, with a 5.9 percent jump in ADR. “Some of the changes in our 60 Horizons market lodging forecasts vary to an even greater extent when you apply the local alternative economic scenarios,” Corgel noted.

“Now more than ever, it is important for owners and operators to understand their local hotel market conditions and economies when preparing their 2019 budgets. It is easy to be enthusiastically mesmerized by the positive outlook for the nationwide lodging market. However, don’t be caught off guard by not understanding what is happening in your neighborhood. It is very evident that local economic conditions, as well as changes to the local lodging supply, are going to significantly impact the performance of U.S. hotels in 2019,” Woodworth concluded.

The September 2018 edition of Hotel Horizons® for the U.S. lodging industry and 60 major markets can be purchased by visiting: https://pip.cbrehotels.com 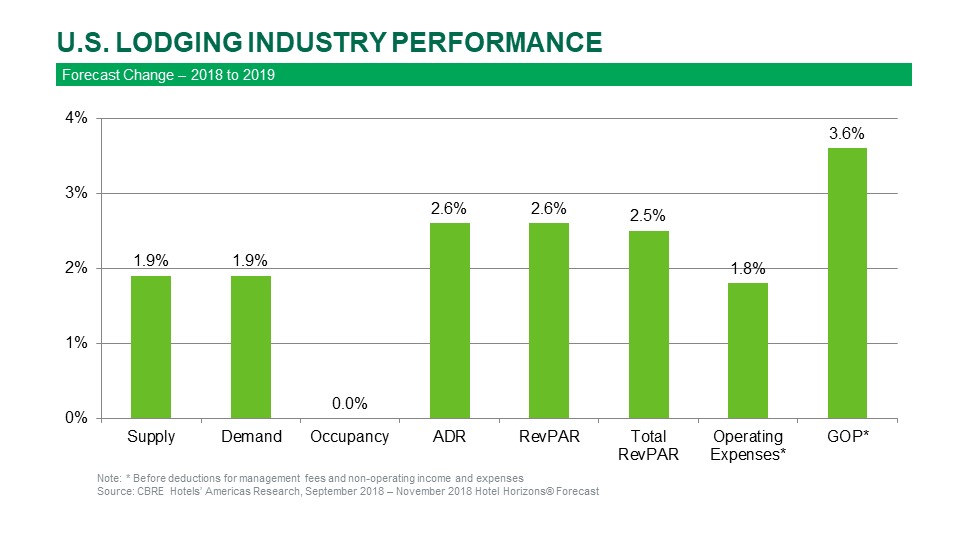 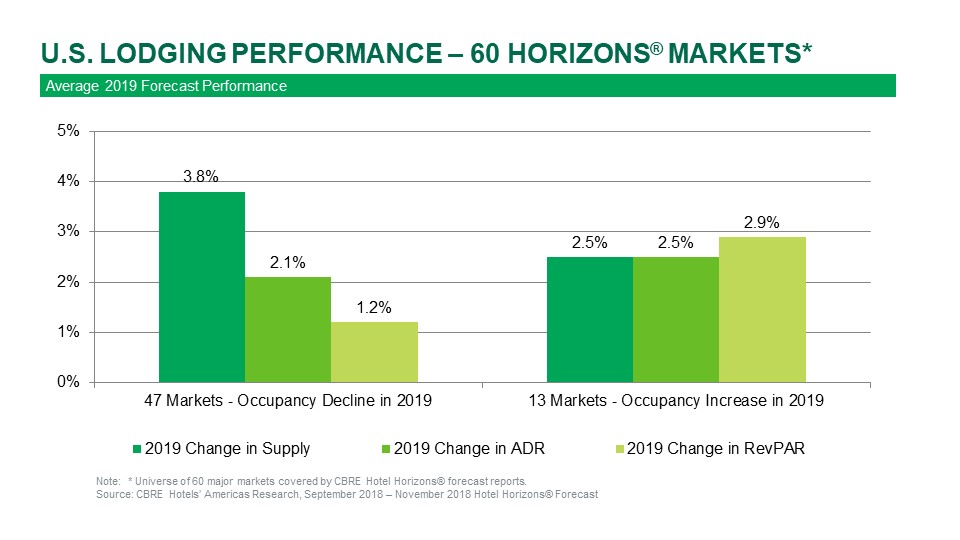