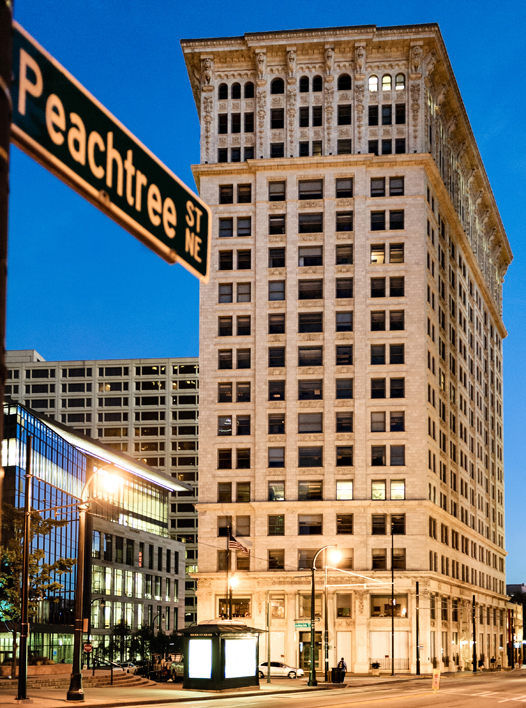 MCLEAN, Va. – Hilton Worldwide (NYSE: HLT) today announced the signing of a franchise license agreement to bring Candler Hotel Atlanta to Curio – A Collection by HiltonTM, a global set of distinctive upper upscale and luxury hotels, hand-picked for travelers who seek local discovery and authentic experiences. The landmark Candler building is set to open as Candler Hotel Atlanta, Curio Collection by Hilton in late 2017 following extensive renovations. The property is owned by REM Associates, L.P. and will be managed by Highgate Hotels.

"We are excited to partner with Stephen Miller and the team at REM Associates to bring the Curio collection to Atlanta's downtown community," said Matt Wehling, senior vice president, development – North America, Hilton Worldwide. "Paying homage to the iconic Candler building and Atlanta's heritage, Candler Hotel Atlanta will be a wonderful addition to our portfolio and is an ideal illustration of how Curio hotels are embracing and preserving significant structures across the U.S."

The Candler building is a beloved fixture of Atlanta's history and design and stands as one of Atlanta's oldest landmarks. The iconic structure was originally developed over a century ago by one of Coca-Cola's formative businessmen, Asa Candler. When built in the early 1900s, it was Atlanta's first steel skyscraper. "Our family is so pleased to honor the history of the 110-year-old Candler Building in downtown Atlanta and create the next chapter for this iconic building as a Curio property," said Stephen T. B. Miller, President and CEO of REM Associates, L.P. "For four generations, our family has been committed to the care and preservation of the Candler Building. We have an obligation to ensure that this beloved historical structure continues to tell the Atlanta story."

Significant renovations will transform the former office building into a 265-guestroom hotel featuring oversized king, double queen and suite rooms. The main level of the hotel will feature the Candler Building's well-known Georgia-white marble grand staircase, original Tiffany windows, a restaurant and bar where Mr. Candler's bank was formerly housed, lobby and lounge area. Meeting and event space will be available as well as an outdoor rooftop space with a great view of the city. The hotel is being developed by Development Services Group and REM is partnering with The Beck Group for design-build architecture and construction services and NICOLEHOLLIS for interior design.

The building is set in Georgia's sprawling capital, in the largest business district in the state, known as Downtown Atlanta or the Historic Business District. This area of the city provides convenient access to the city's prominent sports teams, fantastic dining, and Hartsfield-Jackson Atlanta International Airport. The hotel neighbors Woodruff Park, Georgia State University's Balzer Theatre and Rialto Center for the Arts. Top attractions like the World of Coca-Cola, Georgia Aquarium and Centennial Olympic Park are a short walk or streetcar ride from the hotel.

"Atlanta is a city with a deep narrative of innovation and great antiquity," said Dianna Vaughan, global head, Curio – A Collection by Hilton. "Curio properties like Candler Hotel Atlanta will expertly integrate this narrative with the Curio brand promise to support local discovery, individuality and authentic experiences."

As part of the Hilton Worldwide portfolio, Curio – A Collection by Hilton participates in Hilton HHonors®, the award-winning guest-loyalty program for Hilton Worldwide's 13 distinct hotel brands. Hilton HHonors Members always get our lowest price with our Best Price Guarantee, along with HHonors Points, free Wi-Fi, access to digital check-in and Digital Key, and no hidden fees only, when they book directly through Hilton.

Curio - A Collection by Hilton (curio.com) is a global set of remarkable upscale and luxury hotels hand-picked for their unique character and personality; each one a part of the city they call home. Curio guests are passionate, independent-minded travelers seeking local and authentic experiences who value the added peace-of-mind that comes with the Hilton name and award-winning Hilton HHonors program. Curio joins a portfolio of world-class brands from Hilton Worldwide, a leading global hospitality company. Come discover the latest stories at news.curio.com.