$2.5 Billion Century Plaza Development to Get Underway in March 2016; Expected to Re-Open Early 2018

$2.5 Billion Century Plaza Development to Get Underway in March 2016; Expected to Re-Open Early 2018 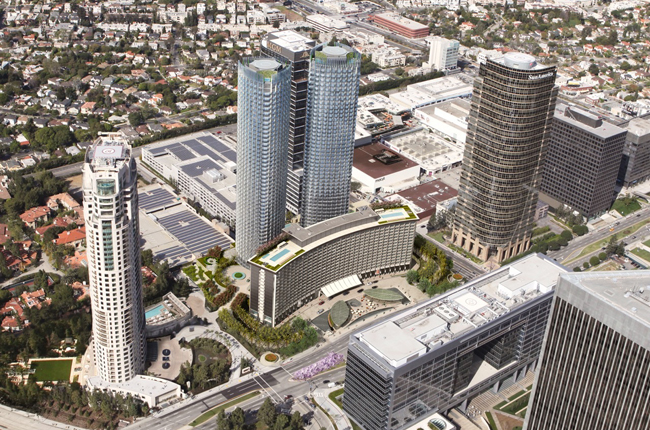 LOS ANGELES–December 9, 2015–The Century Plaza Hotel development project featuring two 46-story luxury residential towers, restaurants, retail shops and a newly designed 400 room 5-star hotel will get underway in March 2016, according to Michael Rosenfeld, CEO of Woodridge Capital Partners who is leading the $2.5 billion project. The historic hotel will close its doors on March 1, 2016 and is expected to re-open in early 2018.

Situated in the heart of Century City at the intersection of Avenue of the Stars and Constellation Boulevard, the 1.5 million square foot hotel and mixed use development will be the centerpiece of a vibrant renaissance occurring in Century City including the $800 million expansion of the Westfield Century City Mall and over 10 million square feet of offices, residences, restaurants, retail and entertainment venues.

The hotel with its iconic crescent shape, designed by Minoru Yamasaki, will be meticulously restored with 394 guest rooms and suites and 63 residences. The open air lobby will be transformed by the internationally acclaimed design firm Yabu Pushelberg connecting public plazas and fountains to a central two-acre garden surrounded by restaurants and retail. In total, there will be 100,000 square feet of retail on the site. The two 46-story towers designed by Pei Cobb Freed will feature 290 luxury residences completing the visionary project.

Rosenfeld also announced the successful completion of $450 million in EB-5 funding for the project. “Mayor Eric Garcetti and his staff were instrumental in paving the way with their strong international outreach,” said Rosenfeld. The Century Plaza project is expected to generate thousands of construction and permanent jobs and substantially increase tax and sales revenues to the City of Los Angeles. The EB-5 financing was arranged through CMB Regional Centers.

Hyatt will no longer manage the hotel after it closes in March, but an agreement with UNITE HERE Local 11 provides Local 11 members with an opportunity to return to the hotel upon its reopening.

First opened in 1966, the Century Plaza has enjoyed a rich and storied history. Rising from the back lot of 20th Century Fox Studios, the hotel has hosted a wide range of politicians, foreign dignitaries and celebrities over the years, as well as every United States President since its opening. The hotel was the residence of choice for President Ronald Reagan, who stayed at the hotel so often that the press named it the “Western White House.” The hotel has hosted a number of notable events over the course of its distinguished history including the Grammy Awards and the “Dinner of the Century” in 1969 honoring the first astronauts to reach the moon.

About Next Century Associates

Next Century Associates was formed by Michael Rosenfeld, founder and CEO of Woodridge Capital Partners, LLC (“Woodridge”). Woodridge is a Los Angeles based real estate Investment and development company that owns a broad range of hotel, resort, residential, and commercial properties throughout the United States. Woodridge’s holdings include the Fairmont San Francisco Hotel, The Intercontinental Mark Hopkins Hotel and Stanford Court in San Francisco, The Century Plaza in Los Angeles and the Ritz Carlton Kapalua, Maui. The firm received the Single Asset Transaction of the Year Award by the Americas Lodging Investment Summit and the San Francisco Business Times Hotel Deal of the Year Award. www.woodridgecapital.com