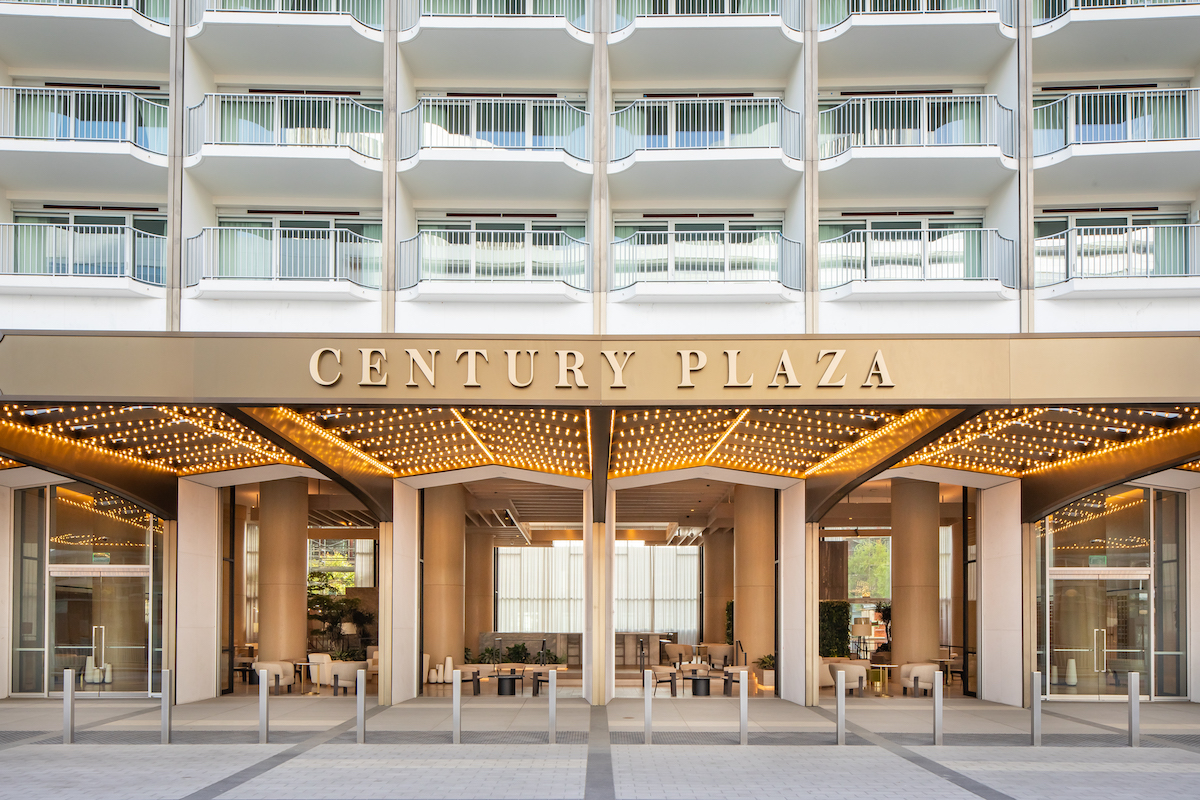 LOS ANGELES – September 14, 2021 – Premiering on September 27, 2021, the completely reimagined Fairmont Century Plaza will build upon its legacy as a Los Angeles cultural landmark and haven for visionaries across art, film, music, politics, and business. The hotel pays tribute to its star-studded history while ushering in a new age of glamour, infusing cutting-edge amenities with pioneering guest experiences.

Originally deemed “The Hotel of the Future,” famed architect Minoru Yamasaki’s mid-century modern icon returns as the centerpiece of a $2.5B mixed-use development project on 6.14 acres, which includes two 44-story towers with 94,000 square feet of boutique shopping and 268 privately-owned luxury residences. Fairmont Century Plaza’s 16 floors house an additional 63 privately-owned Fairmont residential units, as well as 400 guestrooms, including 49 suites. The hotel is home to an impressive collection of art from around the world, including its signature piece, Laura. Sitting on the front drive at 23-feet tall, the serene mesh sculpture was created by internationally celebrated Spanish artist Juame Plensa. From iconic pop culture moments to contemporary modern luxury, Fairmont Century Plaza is at the center of it all.

“Fairmont Century Plaza will once again be THE Los Angeles hotel — just as it was when it opened to worldwide acclaim in 1966,” said Philip Barnes, Regional Vice President, Southern California and General Manager, Fairmont Century Plaza. “Working with our talented team to ensure the return of a beloved jewel in LA’s crown has been a career highlight. We look forward to welcoming guests and locals from all over the world into a reimagined and stunningly beautiful hotel with an exemplary level of service.”

Fairmont Century Plaza is redefining the meaning of luxury far beyond its extraordinary physical structure. Driven by the core belief that no stay should be the same, establishing an authentic connection with every guest and creating extraordinary experiences tailored to each individual is central to the hotel’s shared philosophy. A key ingredient of Fairmont Century Plaza’s vibe is a genuine passion from a world-class team dedicated to transporting guests far beyond the average hotel, dining or spa experience. From check-in to check-out, the charismatic energy is contagious and the service is unparalleled.

“We are thrilled to welcome Fairmont Century Plaza to Accor’s growing luxury portfolio in North & Central America,” said Heather McCrory, CEO of Accor North & Central America. “The reopening of this Los Angeles luxury landmark is a milestone for both the brand and the city, as Fairmont is trusted to reimagine this storied icon following a $2.5B renovation and development project. The newest Fairmont is a flagship for the brand, offering a one-of-a-kind experience at the center of it all in the famed Century City and setting the standard for future development projects in the region.”

The location has an illustrious reputation of being the place for major Hollywood and world events, including the Emmy Awards, the Grammy Awards and the presidential celebration of the Apollo 11 moon landing. Now as Fairmont Century Plaza, the hotel will once again reclaim its place as the epicenter of annual award shows, industry events, fashion and film shoots and monumental art installations. With nearly 24,000 square feet of indoor meeting space and 4,000 square feet of outdoor rooftop space, Fairmont Century Plaza is lavishly appointed with thoughtful amenities and expansive function space. The hotel’s 13,078 square-foot Los Angeles Ballroom is one of the city’s largest ballrooms, ready to host the grandest of soirées in signature style.

International design firm Yabu Pushelberg has transformed the hotel’s design, delivering a modern update to the 1960s nostalgia whilst celebrating Fairmont’s defining quality of grandeur with a Californian twist. The new Century Plaza returns with almost half the number of guestrooms, allowing for a larger, more luxurious footprint with spacious marble bathrooms and a balcony for every guest room and suite.

The Bar at Century Plaza is the pièce de résistance of the hotel’s show stopping lobby, surrounded by a living green wall, floating fireplace and water feature. The lobby also features floor-to-ceiling windows that retract into the floor, creating a gorgeous open space filled with natural light and fresh air. The daring yet approachable menu serves classic cocktails, creative and technique-driven libations, and globally inspired dishes.

As a showpiece of the hotel, Fairmont Spa Century Plaza is reinventing wellness culture with offerings designed to unite ancient modalities of movement with state-of-the-art technologies. This 14,000 square-foot masterpiece is designed to deliver experiences beyond those currently available in the local luxury market. Through its doors lie nine treatment rooms designed by Yabu Pushelberg, experiential rain showers, sanariums, aromatherapy steam rooms, a hammam, and a Himalayan salt room. Magdaleena Nikolov, General Manager of Spa, Wellness and Retail, has curated an extensive array of custom-designed offerings, first-to-market products and results-driven treatments. The spa will be home to an evolving collective of world-renowned wellness experts including Dr. Oz Garcia, a biohacker and leading authority on healthy aging, and Dr. Rita Rakus, London-based rejuvenation and anti-aging aesthetic treatment pioneer.

The Rooftop Pool offers unmatched views of Los Angeles, including the Pacific Ocean, the Getty Museum, and the Hollywood Hills. The Pool Bar features whimsical beverages with Southern California flair that can be enjoyed poolside or in one of the nearby cabanas.

Fairmont Century Plaza is committed to driving change towards positive hospitality. The hotel acts to reduce the impact of activities by implementing a number of sustainable initiatives to support the local and global environment. As part of Accor, Fairmont Century Plaza is a member of Planet 21, an industry-leading corporate social responsibility program that promotes environmental sustainability in the company’s hotels and communities. Built to LEED Silver standards, the hotel features include a rooftop green area, water-efficient landscaping, state-of-the-art recycling and composting programs.

This September, Los Angeles’ famed Century Plaza hotel returns to center stage following a $2.5B renovation. The property has been completely reimagined with 400 expansive guest rooms featuring private terraces, 63 luxury residences, the 14,000 square-foot Fairmont Spa Century Plaza, Lumière - a French-inspired Brasserie, and 24,000 square-feet of private event space touting one of the largest ballrooms in Los Angeles. Born on the former site of a 20th Century Studios backlot in 1966, the legendary Century Plaza has always been at the center of where business meets Hollywood – from the Beatles winning big at the 10th annual Grammy Awards to the first Presidential State Dinner ever held outside the White House, hosted by President Nixon to honor the Apollo 11 expedition. The storied icon will once again re-emerge to write the next chapter of Los Angeles history. Fairmont Century Plaza is conveniently located on the corner of Avenue of the Stars and Constellation Boulevard at 2025 Avenue of the Stars in the heart of Century City, Los Angeles. Be a part of history and book now at fairmontcenturyplaza.com.

Fairmont Hotels & Resorts is where the intimate equally coexists with the infinite – an unrivaled portfolio of more than 80 extraordinary hotels where grand moments of life, heartfelt pleasures and personal milestones are celebrated and remembered long after any visit. Since 1907, Fairmont has created magnificent, meaningful and unforgettable hotels, rich with character and deeply connected to the history, culture and community of its destinations – places such as The Plaza in New York City, The Savoy in London, Fairmont San Francisco, Fairmont Banff Springs in Canada, Fairmont Peace Hotel in Shanghai, and Fairmont The Palm in Dubai. Famous for its engaging service, awe-inspiring public spaces, locally inspired cuisine, and iconic bars and lounges, Fairmont also takes great pride in its pioneering approach to hospitality and leadership in sustainability and responsible tourism practices. Fairmont is part of Accor, a world leading hospitality group consisting of more than 5,100 properties and 10,000 food and beverage venues throughout 110 countries.