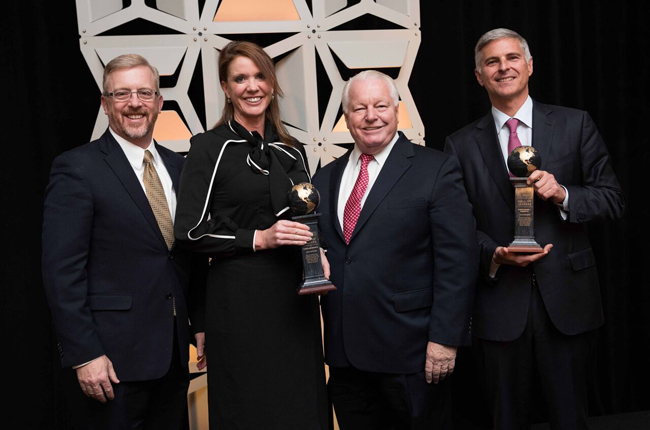 Both leaders inducted into the U.S. Travel Hall of Leaders during a dinner celebrating the association's 75th anniversary

WASHINGTON (November 21, 2016)—Caroline Beteta, president and CEO of Visit California, and Christopher J. Nassetta, president and CEO of Hilton Worldwide, were inducted Wednesday night into the U.S. Travel Hall of Leaders, at a dinner marking the association's 75th anniversary. Beteta and Nassetta will join 92 previously inducted industry luminaries in the Hall of Leaders, which was established in 1969.

U.S. Travel Association President and CEO Roger Dow presents Beteta and Nassetta with the Hall of Leaders Award. Nassetta, who joined Hilton as president and CEO in 2007, also serves on the Executive Committee for the World Travel & Tourism Council, promoting the value of the travel industry worldwide. During his service as chairman of U.S. Travel's CEO Roundtable, he has focused on actively engaging policymakers in efforts to recognize the importance of the travel industry. In addition to leading Visit California, Beteta serves as the Director of Tourism in the California Governor's Office of Business and Economic Development. As national chair of U.S. Travel, she guided the merger in 2009 of the Travel Industry Association and the Travel Business Roundtable. The U.S. Travel Association is the national, non-profit organization representing all components of the travel industry that generates $2.1 trillion in economic output and supports 15 million jobs. U.S. Travel's mission is to increase travel to and within the United States. Visit www.ustravel.org.