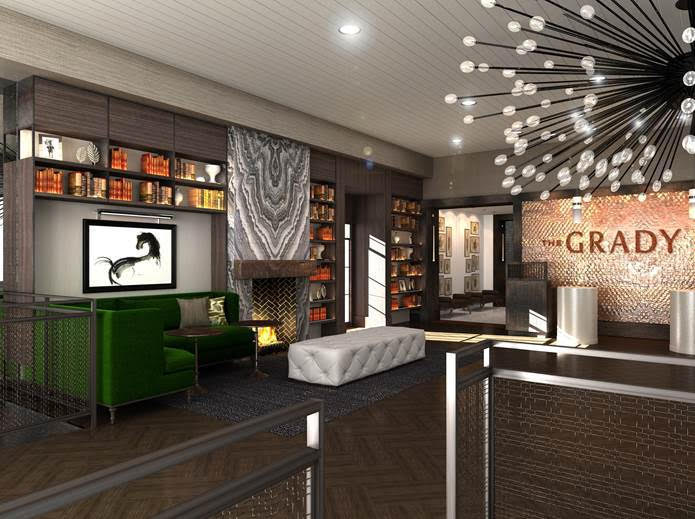 LOUISVILLE, KY – February 24, 2021 – Vision Hospitality Group announces its newest hotel destination, The Grady Hotel, is slated to open Spring 2021. Nestled in the heart of Louisville’s downtown Market District at 601 W Main St, in a historic building dating back to the 19th century, The Grady is deeply rooted in Louisville’s rich past. The 51-key luxury hotel is located at the corner of W Main Street and N 6th Street, just steps away from the Muhammed Ali Center, Frazier History Museum, Louisville Slugger Museum, distillery row, and many of the area’s buzziest restaurants and bars.

“The warm hospitality of Bourbon City lives on in a refined and gracious setting at The Grady,” said Laurent Géroli, General Manager at The Grady. “Guests will be surprised and delighted by local in-room amenities and sophisticated design, paying homage to the city and building’s history.”

Commissioned in 1883 by pharmacist J.B. Wilder, the original building housed an apothecary, where Wilder concocted his own medicinal bourbon, sold alongside a host of remedies and elixirs. Another original resident of the building in the 1920’s was Swann-Abram Hat Co., most prominently known for designing the first hats worn at the Kentucky Derby.  Named after the late Grady Clay, beloved local journalist and key contributor to the New Urbanism movement, The Grady is a historic gem that embraces the vibrant urban renaissance of Louisville.

“We are thrilled to have had an opportunity to restore this historic building and tell Bourbon City’s story through the lens of the hotel,” said Mitch Patel, Vision Hospitality Group President & CEO. “Guests can expect authentic guidance to notable attractions and the neighborhood’s hidden gems, encouraging them to venture beyond the hotel walls.”

The elegant hotel fosters a sense of belonging, celebrating the Louisville story through an approach that honors tradition and redefines modern opulence. Guests are invited to see the Grady through the eyes of a child – a seek-and-find treasure trove – with delights to unlock and vintage keys to unlock them. Surprises and good luck charms abound at the Grady from the complimentary honor bar to signature services. Guests will find horseshoes – to hold in the luck (and remind them of the city’s racing heritage), shamrocks – once engraved on coins to promote the Swann Hat Company, and butterflies and bees – both state symbols and allusions to The Greatest – Louisville’s very own Muhammad Ali. Guests can wrap themselves in silky robes reminiscent of the beloved boxer, they can spot the sparrow –  totem of steadfast service, or behold Grady Green – a luxurious jade, a symbol of serenity, harmony, and balance. A complimentary artisanal breakfast is served daily or delivered to rooms for a nominal service fee.

The Grady promises an experience and design unmatched in Louisville – “a zestful curiosity about the world” – rooted in tradition, resonating with a sophisticated charm that is both warm and contemporary. The hotel prides itself on details and discovery; displays of patina metals and smooth, dark textures tell the story of Louisville’s bourbon heritage, while hints of lush greens voice an affinity for the City of Parks and the outdoors. The Grady pays homage to its storied past through distinctive touchpoints, including the restoration of its renaissance revival-style façade clad with ornamental detailing. Each of its 51 guest rooms provide pops of navy, copper and maroon, featuring 10-15’ original reclaimed wood ceilings, tufted headboards, and an array of locally-inspired art.  Similarly, the hotel’s public spaces feature warm and inviting tones, complete with a library area, art gallery and central fireplace for guests to gather.

Intimately steeped in Louisville’s history, The Wild Swann exudes modern southern elegance and rich heritage, paying homage to the city’s iconic history and the legacy of famous cocktails all over the world. Bestowing tribute to the classic styles of the Swann-Abram Hat Co. and J.B. Wilder, guests enter a world of hand-crafted beverages, fastidious service, and delicious small plates. The Wild Swann’s bar keepers and hosts hold numerous secrets of the city. Ask about the “Swann Song” while sipping meticulously crafted cocktails from gold-rimmed glasses, and they will tell you a story or two.

About The Grady Hotel

A part of Vision Hospitality Group, The Grady Hotel is nestled in downtown Louisville’s Market District in a historic building, originally commissioned by pharmacist J.B. Wilder in 1883. Deeply rooted in Louisville’s rich past, tradition meets modernity and sophisticated charm at the 51-room personal luxury hotel, offering luxe accommodations and provisions to guests and locals alike. Named for the late Grady Clay, an award-winning journalist and one of the first authorities on urban design, The Grady pays homage to its storied past through distinctive touchpoints, including the restoration of its renaissance revival-style façade clad with ornamental detailing. Each of its stylish guest rooms provides pops of navy, copper and maroon, original reclaimed wood panelled ceilings, tufted headboards, and an array of locally inspired art.  The hotel’s public spaces feature warm and inviting tones, complete with a library area, art gallery and central fireplace for guests to gather. Intimately steeped in Louisville’s history, The Wild Swann exudes modern southern elegance and rich heritage, paying homage to the city’s iconic history and the legacy of famous cocktails all over the world. The concept takes its name from the Swann-Abram Hat Co., an original resident of the building, and most prominently known for designing the first hats worn at the Kentucky Derby. The Grady lets the spirit of Louisville pass through you. For more information, visit The Grady Hotel’s Instagram, Facebook or website.