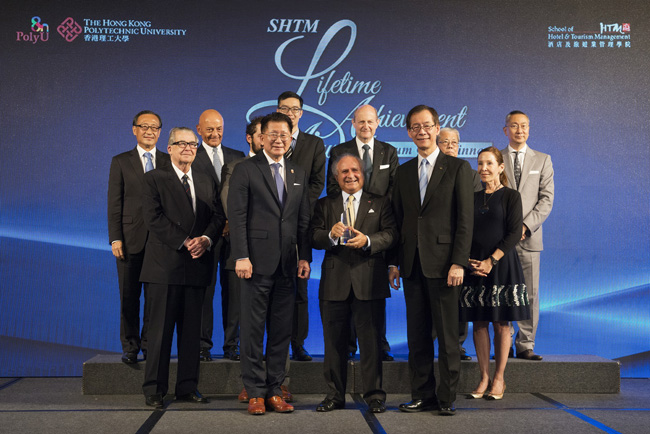 The SHTM Lifetime Achievement Award is established by the School of Hotel and Tourism Management (SHTM) of The Hong Kong Polytechnic University (PolyU) to honour outstanding personalities who have contributed substantially to the development of hospitality and tourism in Hong Kong, the region and around the world. In awarding the distinction, the School seeks to recognise true leaders who help define the global hospitality landscape and advance the industry as a whole. The inaugural award went to Mr Adrian Zecha, founder of Aman Resorts, last year.

At the award ceremony held on 22 September, PolyU President Professor Timothy W. Tong said, “Over the years, Sir Michael has made immense contributions to the international hotel sector, and is continuously redefining the standard of hospitality and luxury. Apart from contributing to the hotel industry, Sir Michael and his family are also supporting Hong Kong’s development in other aspects, and has funded many community initiatives to serve the disadvantaged in Hong Kong and other Asian countries, and the noble deeds are performed in a humble manner. Sir Michael is no doubt a stellar role model and a mentor for young people.”

Sir Michael remarked, “It is a great honour to be recognised for my contribution to the hospitality and tourism sectors, which in itself has been tremendously rewarding. In truth, the Award belongs to all those whom I have had the privilege of working with and a testament to the continued vision and dedication of generations of management and staff who have brought forth the results that are being recognised,”

“We should all be proud that in Hong Kong we have a world-class School of Hotel and Tourism Management which provides many opportunities to cultivate and advance industry standards and, at the same time, nurture talent to play a part in furthering the hospitality and industry’s growth,” he continued.

Sir Michael’s enduring contribution to the hospitality industry has been in both the commercial and philanthropic sectors. The success and expansion of the Peninsula Group, within the Hongkong and Shanghai Hotels, owes much to the keen personal interest he shows in all aspects of the Group’s work and especially with the location and design of new hotels. The same energy is translated to his firm belief that greater opportunities must be made available to the disadvantaged.

Although Sir Michael has many business commitments and responsibilities and is actively involved in a wide programme of philanthropic funding, it is his passion for hospitality in each of these fields that singles him out as one of Hong Kong’s foremost and visionary hoteliers.

Sir Michael is Chairman of The Hongkong and Shanghai Hotels Limited, and Chairman of CLP Holdings Limited, as well as Heliservices (Hong Kong) Limited and Metrojet Limited. He is also a Director of Sir Elly Kadoorie & Sons Ltd and holds a number of directorships in other companies and organisations.

“The SHTM prides itself as a leading force in world hospitality and tourism research and education. Our commitment to excellence is well supported by industry heavyweights and visionaries such as Sir Michael Kadoorie,” said Professor Kaye Chon, SHTM Dean, Chair Professor and Walter Kwok Foundation Professor in International Hospitality Management. “With our international faculty, diverse student body and an influential support base, our School will continue to scale new height and play a pivotal role in nurturing talents for the advancement of the entire industry.”

Over 300 guests attended the ceremony on 22 September and witnessed the presentation of the award held at Hotel ICON, Hong Kong.

For close to 40 years, PolyU’s School of Hotel and Tourism Management has refined a distinctive vision of hospitality and tourism education and become a world-leading hotel and tourism school. Rated No. 1 in the world in the “Hospitality and Tourism Management” category according to ShanghaiRanking’s Global Ranking of Academic Subjects 2017, placed No. 1 in the world in the “Hospitality, Leisure, Sport & Tourism” subject area by the CWUR Rankings by Subject 2017 and ranked among the top 3 “Hospitality and Leisure Management” institutions globally in the QS World University Rankings by Subject 2017, the SHTM is a symbol of excellence in the field, exemplifying its motto of Leading Hospitality and Tourism.

With 75 academic staff drawing from 22 countries and regions, the School offers programmes at levels ranging from undergraduate degrees to doctoral degrees. In 2012, the SHTM was bestowed the McCool Breakthrough Award by the International Council on Hotel, Restaurant, and Institutional Education (I-CHRIE) recognising its breakthrough in the form of its teaching and research hotel – Hotel ICON – the heart of the School’s innovative approach to hospitality and tourism education. A member of the UNWTO Knowledge Network, the SHTM is also the editorial home of Asia Pacific Journal of Tourism Research, Journal of Travel and Tourism Marketing, Journal of Teaching in Travel and Tourism and Journal of China Tourism Research.