Little has improved in the realm of lodging debt maturities and the hotel refinancing environment since we last reported in August. Perhaps it will be the passage of time that gets us closer to the other side of the current period of difficulty and insecurity.

There are simply too many variables at play at the moment and a lack of confidence in the near-term future of the debt markets. As Lou Plasencia, CEO of The Plasencia Group, recently wrote, “markets hate uncertainty.” Debt markets only work when lenders can effectively and appropriately price risk, and that is very difficult to do right now. Many lodging industry professionals we speak with describe the current lending environment as “frozen” or, at best, “foggy.” As we have previously reported, the Federal Reserve Bank’s aggressive raising of interest rates in an effort to curtail inflation is having a dramatic impact on the overall lending market and in the slowing down of capital flows into the United States.

Additionally, in October, the Trepp CMBS Delinquency Rate for hotels increased modestly. The rate for lodging properties has been trending lower over the last several months, but the uptick in delinquencies for the office and retail sectors may be signaling a turning point toward greater distress. TREPP also reported that 15 CMBS loans were resolved in October with $154 million of losses including two hotels in New York City and Chicago.

Trepp’s Q3 Data Review also reports that the volume of CMBS loans in special servicing increased for two consecutive months, the first time that has occurred since late 2020 when the country was still in the depths of the pandemic. A total of 287 hotel loans with a balance of almost $6.5 billion are reported to be in special servicing as of this past September.

Rising interest rates, a slowing economy, and pervasive uncertainty have many forecasters lowering expectations for the economy in the fourth quarter. Recession fears for 2023 are mounting. Just recently, several of the major lodging C-corps and REITs tempered their guidance for the balance of the year. This reality does not bode well for borrowers with maturing hotel loans. With the lending market severely constrained and higher interest rates pressuring Debt Service Coverage Ratios and property valuations, borrowers will inevitably and quickly face difficult choices. Unlike the “extend and pretend” posture that lenders took during the pandemic, we do not expect such leniency as loans begin to mature.

A persistent hotel lending quagmire provides fewer refinancing options for owners, and the available options are likely to require the contribution of fresh capital in the form of new owner equity, bridge loans, preferred equity investment, or another form of gap financing. Even these alternatives, if available, may come at a prohibitively high price. If a borrower is indeed able to obtain fresh debt, we strongly recommend structuring the loan in a manner that allows it to be topped off or refinanced within the next two years, at which point the debt markets will hopefully have returned to some level of normality.

As we have previously suggested, in some situations, a sale of the asset might actually provide the best outcome for many distressed owners. 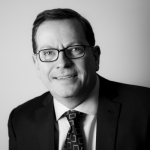 Dexter Wood is the Senior Managing Director of The Plasencia Group. He is based in Boston, bolstering the Plasencia Group’s Northeastern, as well as national, reach. His most recent post was as senior vice president and global head of development and real estate finance for Hilton Worldwide, where he was in charge of governing the allocation of capital to drive new unit growth and led an international team of more than 50 top professionals. In 2017, he transitioned to Park Hotels & Resorts when Hilton spun the company off.