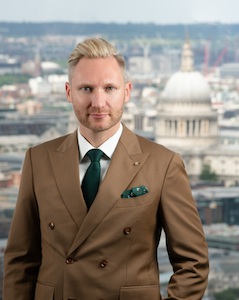 London, July 17, 2019 – Shangri-La Hotel, At The Shard, London, a leading luxury hotel in the city, is delighted to announce the appointment of Kurt Macher as General Manager of the hotel. Kurt moves to London after securing multiple awards and accolades for The Temple House, Chengdu, China, a luxury Swire Hotel.

As an international hotelier with over 28 years of experience in the luxury hospitality industry, Kurt has worked for some of the world’s leading hotel brands as general manager and within senior management roles including Wharf Hotels, Four Seasons Hotels and Resorts and The Peninsula Group. Kurt has led high performing hotel teams in the US, Canada, the Caribbean, Europe, the Middle East and in some of the fastest growing markets across Asia, most notably in Hong Kong and Singapore.

During his time in China, Kurt was an active board member of the British Chamber of Commerce in Southwest China and was also a finalist in the General Manager of the Year category at the China Hotelier Awards in 2018. Early on in his career, Kurt held positions in front office, guest relations, concierge, food and beverage and housekeeping. His breadth of experience coupled with his passion for personalized service and a strong entrepreneurial drive ensures Kurt is well placed to build on the hotel’s accomplishments after it was recently awarded five stars by Forbes Travel Guide and Five red stars by the AA Hospitality Group.

With its notable achievements, it’s an exciting time to be joining Shangri-La Hotel, At The Shard, London,” said Macher. “The hotel has really gone from strength to strength as it celebrates its fifth birthday this year. It is not only becoming one of the most distinguished hotels internationally; with its location in the Shard, it is also becoming one of the most recognized. I very much look forward to building on this success with the team and driving even better results and improved guest engagement.”

“It is a pleasure to welcome Kurt into the Shangri-La family,” said William Mackay, executive vice president, Europe and the Americas at Shangri-La International Hotel Management Ltd. “Under his proven leadership, we look forward to continuing to drive the hotel’s development and creating the most memorable of experiences for guests.”

About Shangri-La Hotel, At The Shard, London

Shangri-La Hotel, At The Shard, London is the capital’s highest hotel, located in The Shard, one of the world’s most iconic buildings situated in the heart of London Bridge. Set between Borough Market and Bermondsey Street, the hotel is at the center of London’s hottest dining scene. Whether by foot, road, boat or rail, it connects to world famous landmarks such as St Paul’s Cathedral and Tower Bridge, and to London’s main business districts in the City and Canary Wharf. Shangri-La Hotel, At The Shard, London service has been redefined with a style that feels friendly, warm and genuine, giving guests a truly unique experience of the capital.

About Shangri-La Hotels and Resorts