The U.S. economy is expected to grow roughly six percent for the year, however with one quarter to go in 2021, this year has done its best to be as tumultuous and volatile as the last. It feels like we’ve been on this road for a while, with the same kinds of bumps to navigate including COVID, deepening supply chain issues, higher energy prices, a recent cutback in consumer spending, and the scarcity of materials. What everyone had hoped would be a more normalized environment has turned out to be anything but that.

After a rapid rebound in U.S. economic growth during Q2 2021, news of the fast-spreading Delta coronavirus variant created a cloudier outlook. Today there are two perspectives from which to dissect the near-term future, namely glass half empty or glass half full. On the one hand, although the U.S. has achieved months of steadily declining case counts, the fight against the pandemic appears far from over. COVID-19 continues to loom large as new, more transmissible variants, and ongoing virus outbreaks in places like Australia, India, South Korea, and the continent of Africa highlight that the world remains vulnerable to the pandemic. Additionally, according to the Centers for Disease Control and Prevention, less than 60 percent of all Americans are fully vaccinated. On the other hand, the recent swift U.S. economic recovery is unlike any in recent history as U.S. startup businesses are launching at the fastest pace ever, household debt-service burdens in relation to after-tax income are at the lowest levels in decades, home prices are surging, and the S&P 500 and tech-heavy Nasdaq are both up approximately 30% compared to the same period a year ago, and the Dow Jones Industrial Average has risen more than 20%. Widespread vaccination during the first half of 2021, and over two trillion dollars in additional personal savings throughout the last year have provided American consumers the means to spend; specifically on discretionary items such as travel.

The Delta variant led several large companies to push back their return-to-office plans, among them Amazon and Apple announcing that they will delay their workplace returns until at least January 2022 heightening risk for hotels with a trickle through negative effect on business travel. Additionally, major corporate and consumer events with thousands of attendees continue to cancel and/or shift to virtual executions.

Despite the pandemic placing hundreds of thousands of hotel employees out of work, the U.S. lodging industry is facing a massive labor shortage, due in part to the availability of generous unemployment benefits and government funded stimulus checks, schooling and/or childcare challenges, and persistent health concerns about workplaces. Continued permanent migration out of the hospitality industry to higher-paying employment is expected to render upward pressure on labor shortages and wage rates and benefits, placing travel providers at risk of not being able to bring sufficient capacity back in a timely manner to meet demand, resulting in lost profits.

Generally, the commercial real estate market in the U.S. is flourishing, as asset values declined far less than during the Great Recession of 2008/2009 and have already reversed course into a recovery. In addition to federal government support of the economy, thus far lenders have been flexible with forbearance terms and have avoided widespread foreclosures.  Copious amounts of all types of debt and equity are available from domestic and offshore entities that currently perceive U.S. hotels as desirable acquisition and investment opportunities, particularly due to the notion of being able to continuously raise rooms rates during an inflationary environment. Furthermore, rescue capital to provide needed liquidity for hotel owners to retain their assets is competing with opportunistic investors seeking distressed investment plays.

As the U.S. hotel industry continues to emerge from the carnage induced by the global pandemic, an abundance of capital continues to fuel increasing activity with lodging sector mergers, acquisitions, and spinoffs.  Significant Q3 2021 transactions include:

Institutional investment entities that have been recent active investors of U.S. lodging assets include:

Generally, hotel properties are trading at strong prices as investors look past the below average occupancy rates and generated income which remain below pre-pandemic levels. Investors with long-term horizons are betting that U.S. hotels will once again fill with guests as the recovery from the pandemic continues to unfold. In addition to traditional lodging sector focused investors, first-time hotel buyers are interested in hotels given the record-high pricing in other real estate sub-sectors. Although distressed deals have been few and far between, with many prospective buyers frustrated with elevated pricing levels there remains an expectation that more of these opportunities will come to market during the next twelve months.

An inflection point will soon be reached where both lenders and borrowers have no more to “give”, and loan defaults and foreclosures are expected to increase as forbearance periods end particularly in connection with large and/or old full-service hotels. Furthermore, an uncertain recovery trajectory coupled with looming capital expenditures and property improvement plans may force owners to finally capitulate, as many lenders will ultimately lose patience and demand recapitalization and/or enforcement of their remedies. During the remainder of this year, and well into 2022, expect more hotel sale transactions, as well as more deployment of rescue capital for troubled lodging deals.  Working out distressed hotel assets will take time beyond even when sector supply and demand metrics stabilize, which could be several more years.  Savvy investors who deploy capital into U.S. hotels at market pricing, and if need be, are ready, willing, and able to hold for ten years, will invariably achieve superior risk adjusted returns when compared with other asset classes. 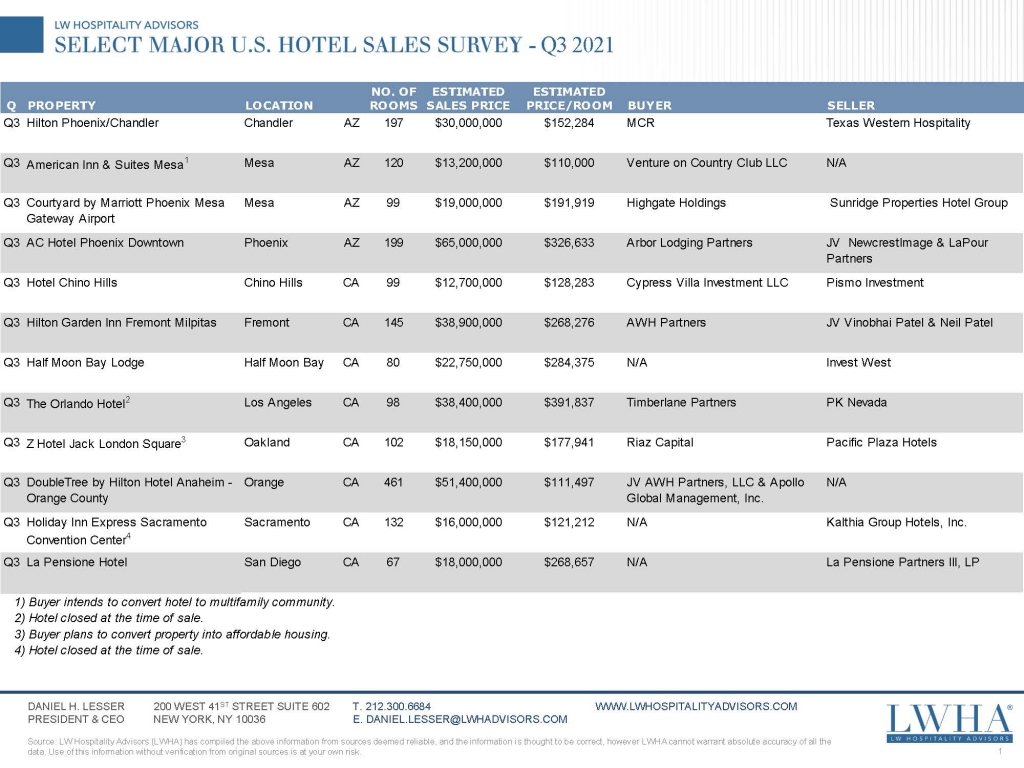 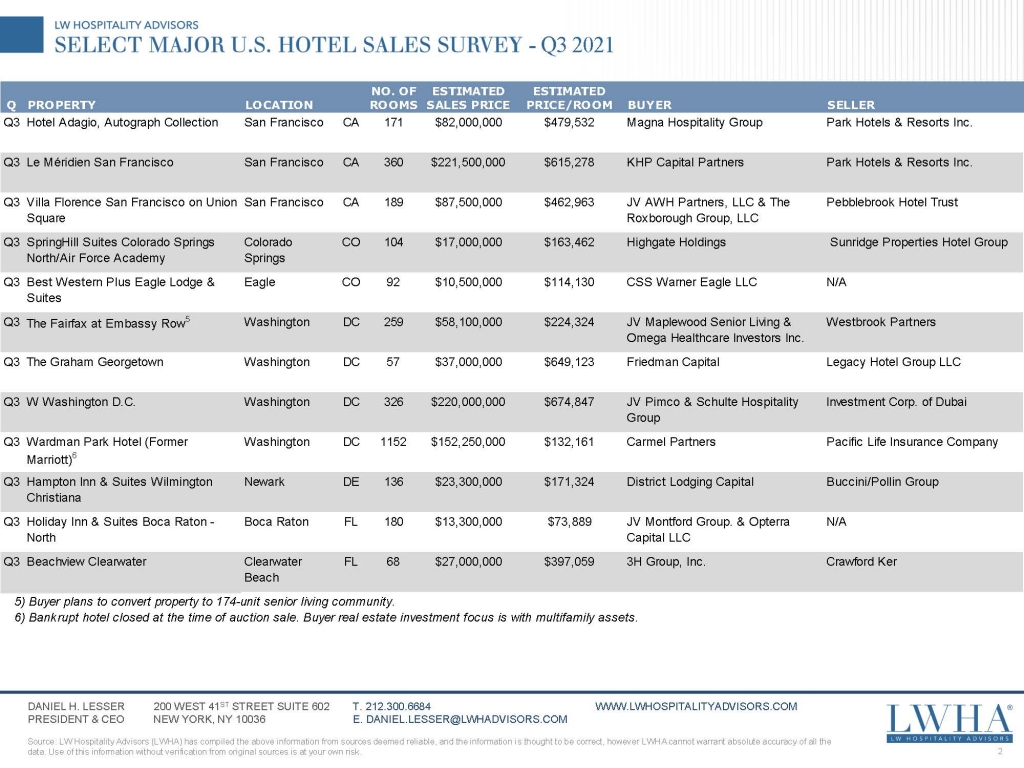 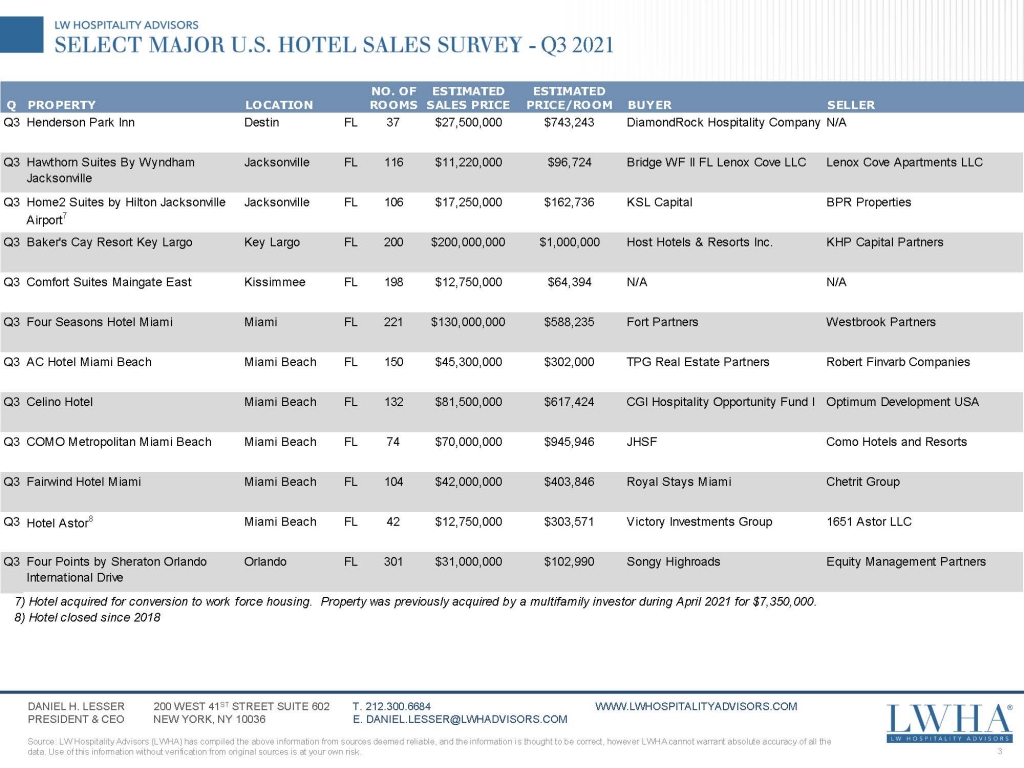 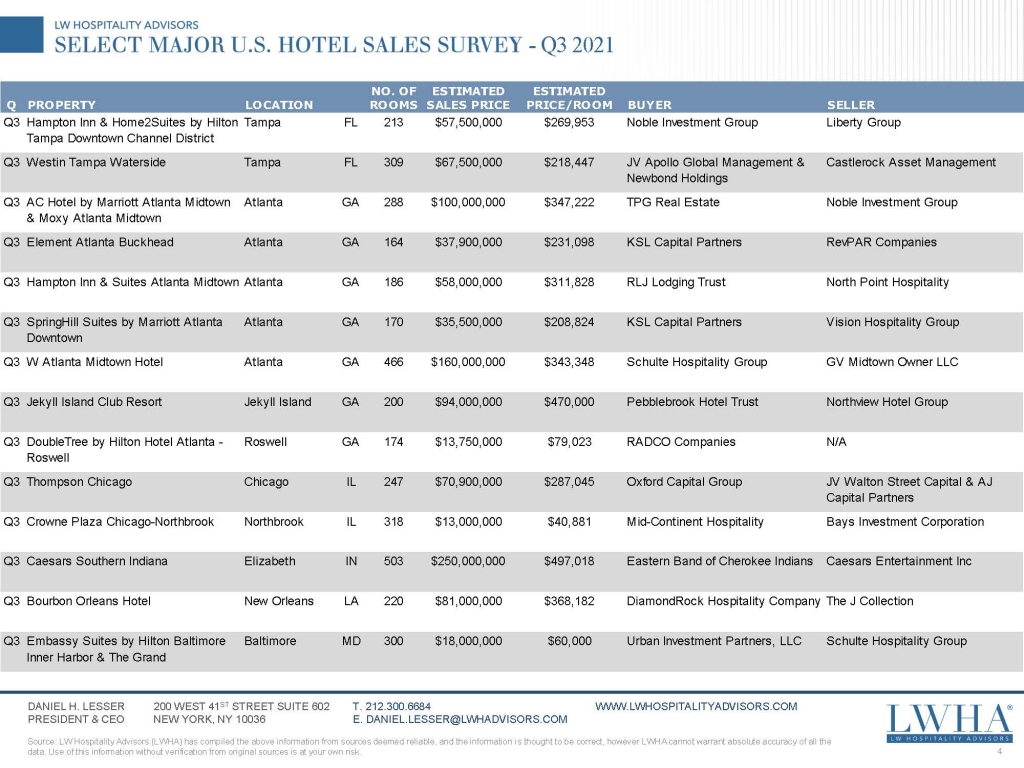 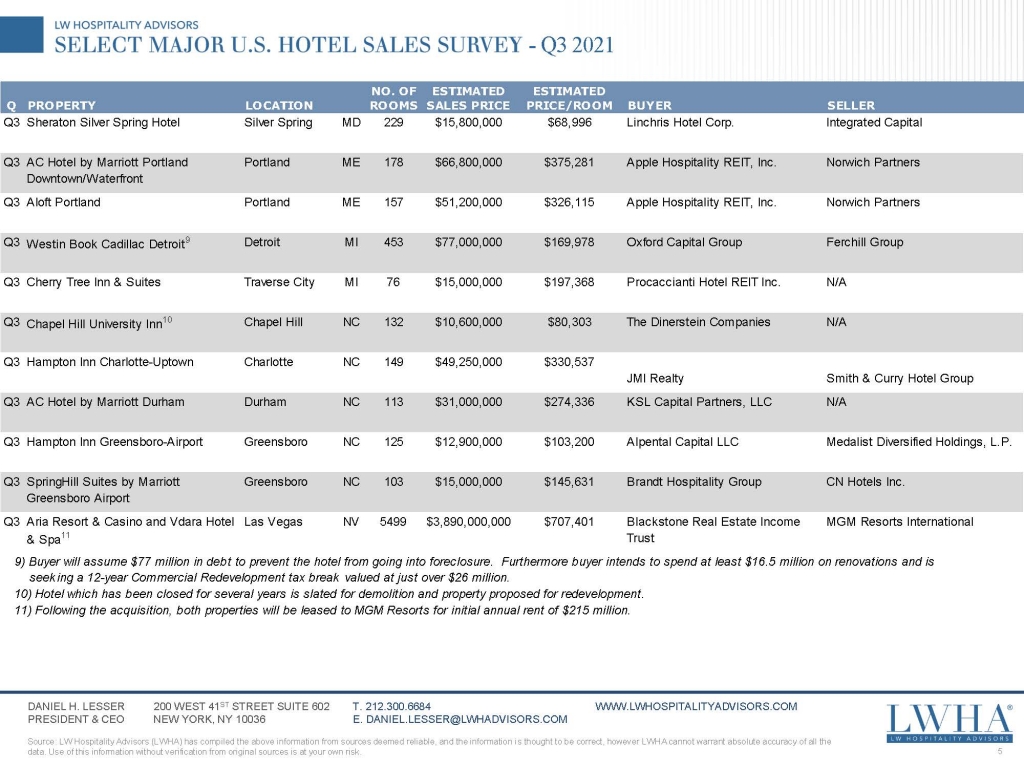 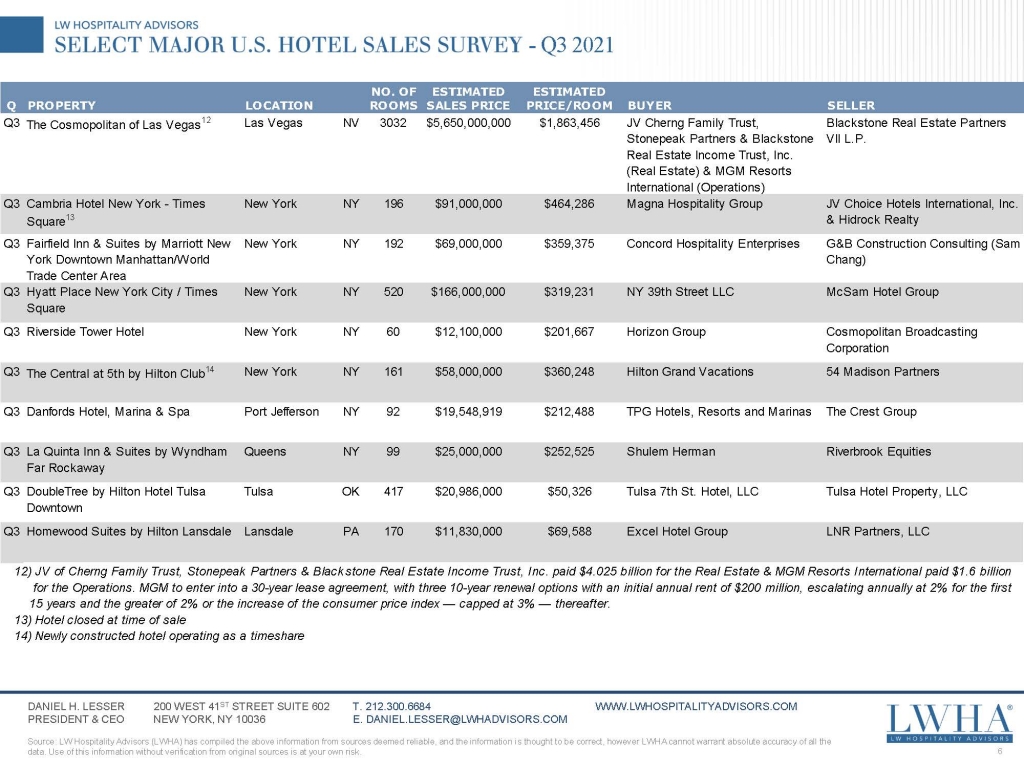 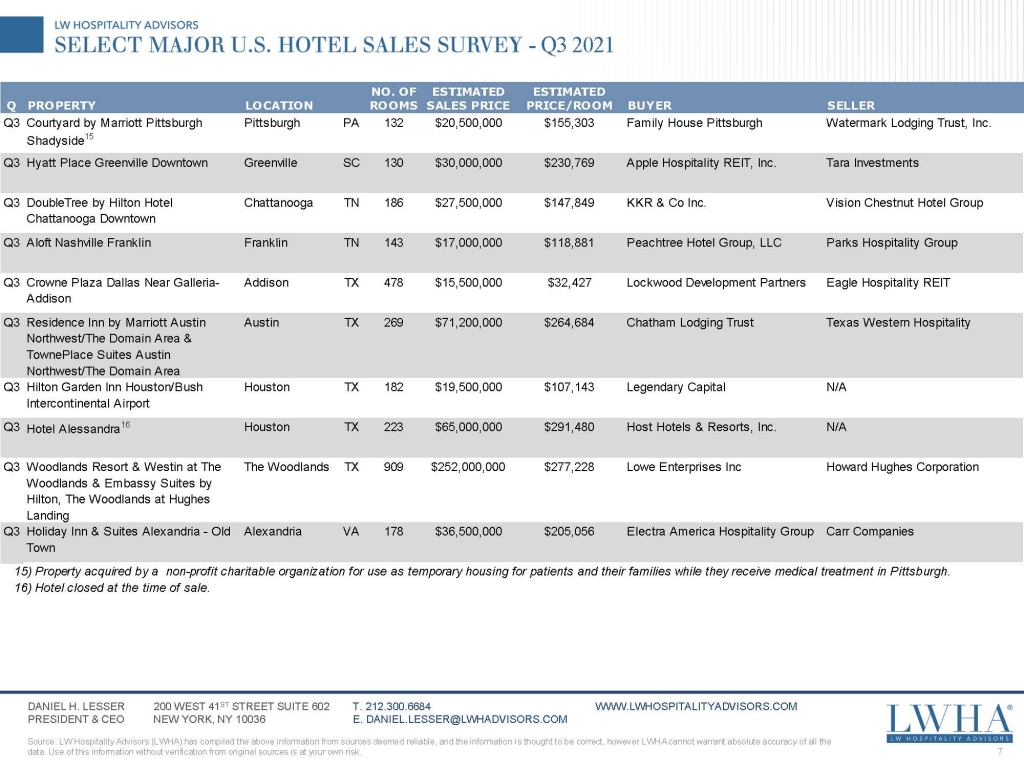 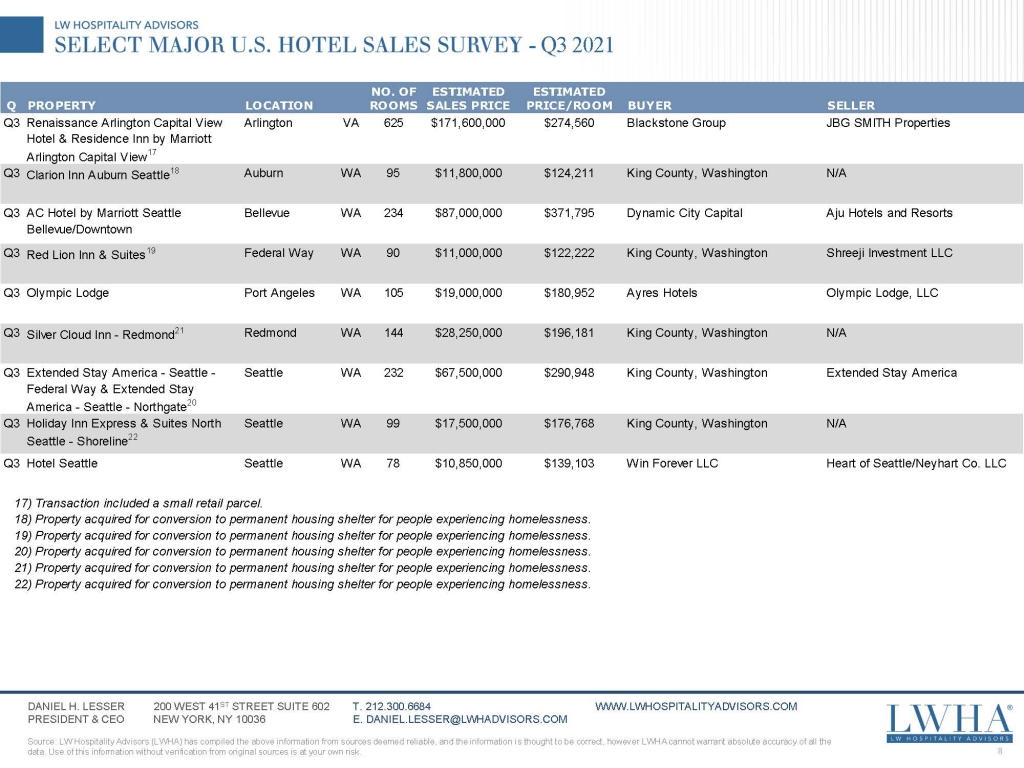