Legendary travel brand Orient Express, part of the world-leading Accor group, has signed a partnership agreement with Italian hospitality group Arsenale S.p.A to open the second Orient Express hotel in Italy at the spectacular Palazzo Donà Giovannelli in Venice. The Groups have selected architect and interior designer Aline Asmar d’Amman and her studio Culture in Architecture to design and decorate the space.

Venice, once the gateway to Constantinople and a mythical stop on the legendary Orient Express train – that opened its doors in 1919 with the completion of the Simplon tunnel linking Switzerland to Italy – will be the home of the second Orient Express hotel, set to open in early 2024.

Located just ten minutes from Venice’s Santa Lucia train station, next to the Cannaregio shopping district, and rooted in the origins of the City of the Doges, the Palazzo Donà Giovannelli is a treasured palace built in 1400 by architect Filippo Calendario, known for Venice’s famed Doge’s Palace. Former home of the Duke of Urbino, a patron of the arts, it has been renovated twice, notably in 1800 by architect Gian Battista Meduna. At one time a pinacotheque which housed the painting La Tempesta by Giorgione, it was successively owned by the Donà and Giovannelli families.

An ode to the heritage of Venice, inspired by all of the cultures and eras that are forever a part of its history, the Orient Express Venice Hotel will be home to 45 rooms and suites, all overlooking the gardens and canals of Venice. The hotel bar will be located in the former piano nobile ballroom on the main floor of the building. A world-class restaurant will introduce guests to the flavours of Italian gastronomy. Select terraces hidden on the hotel’s rooftops will offer the most beautiful views of the wonders of the Serenissima.

Orient Express Venice: between the East and the West

“Orient Express Venice embodies a unique encounter between two icons: the legendary luxury brand and the Palazzo Donà Giovannelli. An architectural feat at the crossroads of cultures, a link between the East and the West, the landmark building is anchored in eternity and ready to come back to life with a theatrical and contemporary art of living, steeped in infinite elegance” says Aline Asmar d’Amman.

Born in Lebanon, Aline Asmar d’Amman, via her studio Culture in Architecture, creates projects where past and future are connected, where culture symbolizes a bridge between continents. Convinced that beauty adds to, in her words, “the poetic soul of the world”, she has designed the interior architecture of numerous private residences and has taken on the art direction of luxury hotels such as the Hôtel de Crillon in Paris and emblematic restaurants such as Le Jules Verne at the Eiffel Tower. She has also collaborated with Karl Lagerfeld on the making of prestigious decorations and a collection of objects and furniture in marble. Last April, she unveiled the architectural scenography of the Lebanese Pavilion at the Venice Biennale of Art. 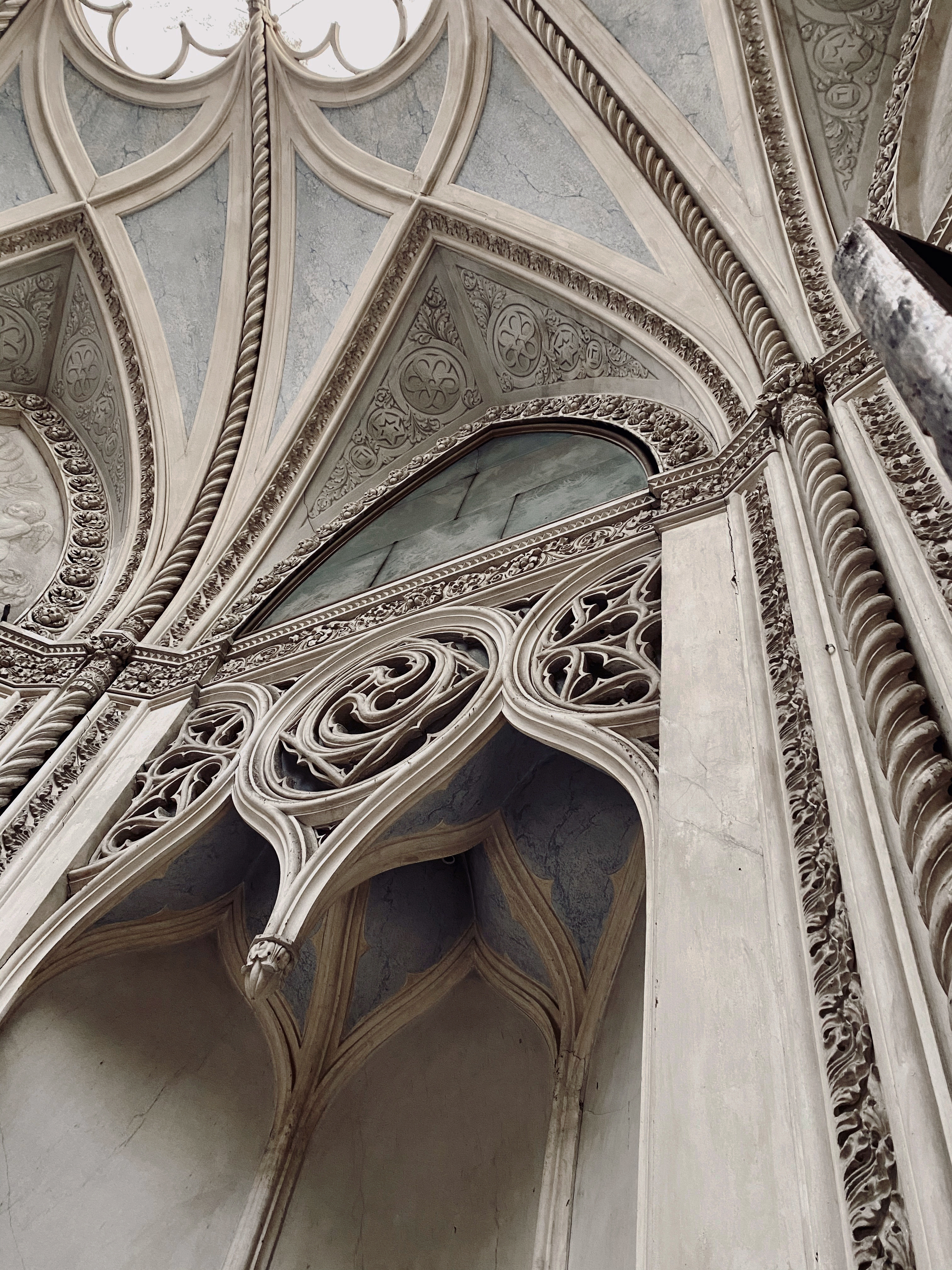 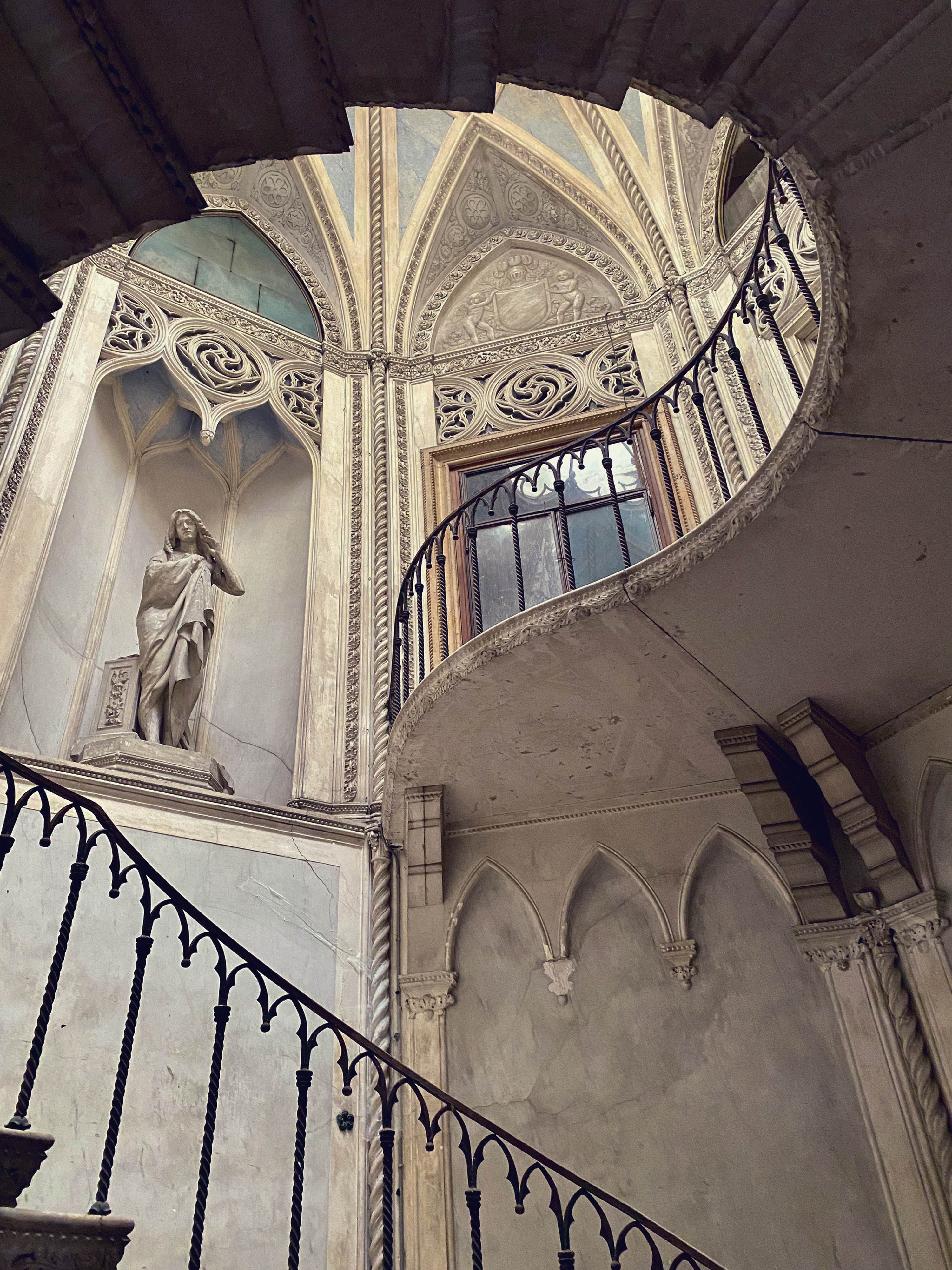 From the main entrance and its garden, which can be reached from the train station along the Strada Nova, or from the neo-Gothic and multi-layered facades that can be visited from the Rio de Noal by boat, Palazzo Donà Giovannelli is filled with beauty and grandeur. It is an island within an island, where doors and windows anchored in the sea seem to speak directly to the sky above.

Just one step inside this Palace evokes a feeling of complete enchantment. One enters as if leafing through the pages of the book of time. It is a plunge into an ageless romanticism, where the heritage of the stone seems to be frozen in time whispering layers of stories to be revealed. From the marble carved entrance, the plastered walls in faded lost colours to the masterful octagonal staircase of neo-Gothic style designed by the architect Meduna, artistry and a feeling of eternity collide. On its vaulted ceilings, the domes call for light and theatricality.

On the main floor, or piano nobile, its many salons and ballrooms are home to 800 years of history. It is a journey through the ages, a blend of baroque, neoclassical and gothic styles along with the splendour of Eastern fantasy, an exoticism that transcends the realm of possibility. The rooms are decorated with patterns, mosaics, stucco, paintings, frescoes tinted with forgotten colours and wonderful cherubs. The walls abound in enigmas never meant to be solved.

Stephen Alden, CEO Raffles and Orient Express, Accor commented: “The arrival of Orient Express in Venice resonates naturally with the brand’s history. It marks a return to the roots of a legend that finds its ultimate expression in the Palazzo Donà Giovannelli. Inspired by her multicultural background, passion for Venice and unique poetic language, Aline Asmar d’Amman will sublimate the design of one of the most charismatic palaces in the world.”

Paolo Barletta, CEO of Arsenale S.p.A added: “The strategic union between Venice and the new Orient Express Hotel represents another significant step in the objective that Arsenale is pursuing thanks to the partnership with Orient Express, namely the relaunch of luxury tourism that highlights the unprecedented artistic and cultural heritage of our Italian peninsula. Palazzo Donà Giovannelli will become a unique landmark in Venice with its exceptional design, history and heritage. Aline Asmar d’Amman’s meticulous care and eclectic experience will shed new light on the ancient beauty of the Palazzo, helping to spread a message of excellence from Venice throughout the whole world.”

A brand within Accor: Artisan of travel since 1883, Orient Express sublimates the Art of Travel through its luxury trains, unique experiences, collections of rare objects, and soon its first hotels around the world. The Orient Express Venice hotel, which will open in 2024, is the result of a partnership between Accor and the Italian hospitality group, Arsenale S.p.A.

Founded in 2020 by Annabel Holding and Paolo Barletta, Arsenale is an Italian company who continue to make a mark in the world of luxury hotels. The main objective is the enhancement of the Italian tourism sector, through two main divisions: Hospitality Hotel and Resort, focused on the development and management of hotel facilities in synergy with the most renowned luxury brands in the world, and Hospitality Travel Itinerary with Orient Express La Dolce Vita, the first sustainable railroad tourism project in collaboration with Orient Express, Trenitalia-Gruppo Ferrovie dello Stato and Fondazione FS.