Since January 2020, CBRE Hotels Research has been analyzing the impact of the COVID-19 virus to understand how the societal and economic impacts of COVID-19 will influence the performance of U.S. hotels.

Initial guidance came in the form of updated Hotel Horizons® forecasts of occupancy, ADR, and RevPAR for the nation’s chain-scales, location categories, and 60 major markets.  Concurrently, we relied on the historical relationship between declines in RevPAR to estimate the potential decreases in profits.  For example, a 20 percent decline in RevPAR for a full-service hotel during 2009 resulted, on average, in a 39 percent decline in gross operating profits (GOP) and a 52 percent drop in earnings before interest, taxes, depreciation and amortization (EBITDA).

As the forecast updates have progressed, the magnitude of the projected declines in RevPAR have surpassed anything our firm has seen while tracking U.S. hotel performance the past 90 years.  As of April 12, 2020, CBRE Hotels Research is forecasting an annual decline in RevPAR of 46.0 percent across all U.S. hotels in 2020.  Based on CBRE’s annual Trends® in the Hotel Industry survey of U.S. hotel operating statements, the previous greatest annual decline in RevPAR occurred in 1932 when the Trends® sample suffered a RevPAR decrease of 24.7 percent.

With the lack of RevPAR declines to use as a precedent, our efforts to provide guidance on the potential profitability of U.S. hotels in 2020 have shifted toward an analysis of operating performance at the low levels of forecast occupancy.  Based on CBRE’s April 12, 2020 forecast, the U.S. lodging industry is projected to achieve an annual occupancy level of 42.6 percent in 2020.  To put this in perspective, the lowest annual occupancy level ever achieved by the CBRE Trends® sample was 44.5 percent in 1933.

Analyzing hotel operating performance based on occupancy levels inherently considers the fixed/variable nature of hotel expenses.  At the low levels of occupancy currently forecast for 2020, hotel owners and operators have responded by reducing their fixed costs as much as they can and spending just a minimal amount on the variable costs.

Occupancy levels are forecast to bottom out at 23.3 percent during the second quarter of 2020.  Reviewing the CBRE database of operating statements, it is virtually impossible for a hotel to generate a gross operating profit, let alone any earnings before interest, taxes, depreciation and amortization, at such a low level of occupancy.  Therefore, several hotel owners have shuttered operations in March and April of 2020, with the expectation to re-open later in the year.

For hotels that can sustain operations (albeit at times at minimum levels) for the entire year and achieve an annual occupancy level near CBRE’s current forecast of 42.6 percent, the possibility does exist for most hotels to generate a sufficient cash flow to cover a property’s departmental and undistributed operating expenses.  The ability to achieve cash flow at the EBITDA level, and therefore pay debt-service or distribute a return on investment, is doubtful.

In the accompanying charts, CBRE presents select revenue, expense, and profit ratios as a percent of total operating revenue for each of the six chain-scale categories.  The data is based on the aggregate performance of hotels that achieved an occupancy level proximate to the April 12, 2020 forecasts for each respective chain-scale.  The data was derived from samples of operating statements for the years 2015 through 2019, adjusted to constant value 2019 dollars.

In 2020, those hotels that opt to close for a portion of the year may mathematically achieve relatively modest “annual” levels of occupancy and have limited the negative cash flows that would have occurred during the depths of the second quarter.  However, when these properties re-open as anticipated during the third or fourth quarters, they will undoubtably incur unique cleaning, maintenance, rehiring, inventory and other operating expenses that do not typically influence the financial performance of a hotel.

The ability to generate an “operating profit” is of limited benefit to hotel owners, lenders, and investors that depend on EBITDA profits.  However, an understanding of operating performance at austere levels does provide guidance to potential cash flows that can inform negotiations and discussions among the various stakeholders in hotel real estate investment and operations. 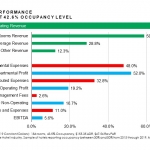 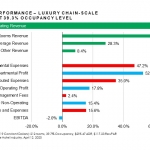 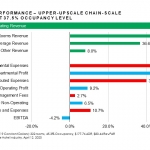 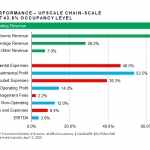 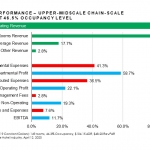 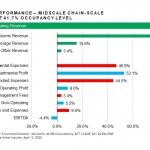 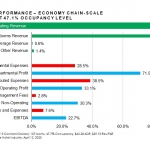 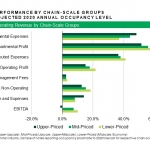 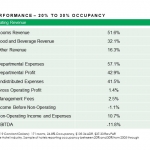 Robert Mandelbaum is Director of Research Information Services for CBRE Hotels Research.  To contact a CBRE Hotels professional to assist in evaluating the performance of your hotel(s) in 2020, please contact Client Services at [email protected] or call (404) 812-5024.