More than two-thirds of STR-defined U.S. hotel markets (113 of 165) outperformed their 2019 comparables over the four weeks ending 9 April 2022, which is reflective of the industry’s rebound toward normalcy as well as some influence from inflation. Only seven markets in total over the 28-day period reported revenue-per-available-room (RevPAR) indices below 80 (20% below 2019 levels).

Late March into early April 2022 also marked a key turnaround in the number of major markets making appreciable performance gains toward historical performance levels. A dozen of the Top 25 Markets experienced RevPAR that was 20% or higher month over month. Washington, D.C., showed the largest monthly improvement as RevPAR improved 55% from US$70 to US$109. That was still well off the US$145 from the corresponding period in 2019 (RevPAR index of 75 or 25% below 2019 levels), but it marked a long-awaited improvement for a market that was disproportionally impacted by the downturn. D.C.’s performance improvement can be attributed to its 14.3-percentage point rise in occupancy as well as its US$29 rise in average daily rate (ADR). New York City also experienced a 47% RevPAR increase to US$175 (index: 85. The Big Apple’s occupancy increased 13.3 percentage points from the previous four-week period, but the market also experienced a 21% rise in ADR. The latter translated to an ADR of US$235 or US$41 better than the previous period.

Outside of the Top 25 Markets, core strength remained in those markets which traditionally cater to leisure travel during the spring months. Among smaller markets, eight of the 10 best average RevPAR markets were in either Florida or Hawaii. The best RevPAR improvements from the previous four-week period included August, GA (home of the Masters golf tournament) with an index of 105, Gatlinburg, TN (124) and Myrtle Beach, SC (128). 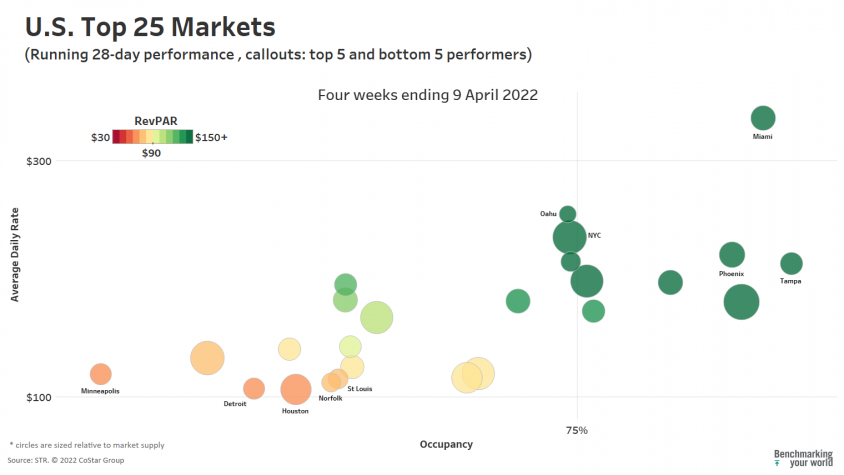 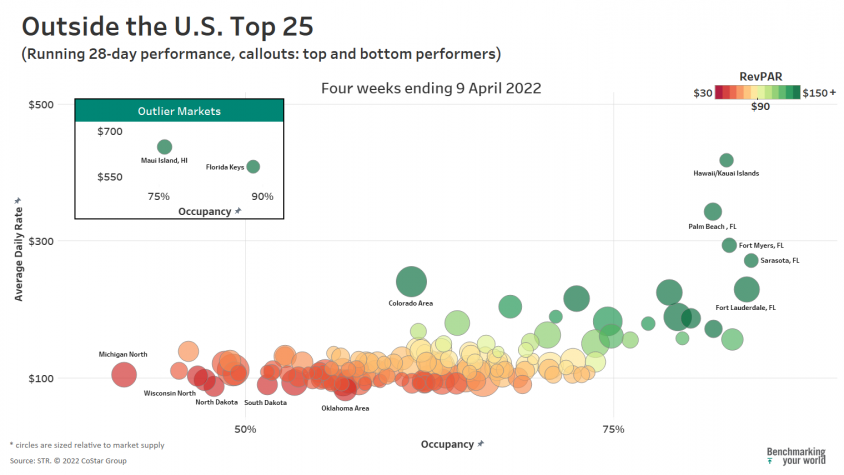