Is It Okay to Call a Customer or Employee Honey?

Home/Is It Okay to Call a Customer or Employee Honey?

Is It Okay to Call a Customer or Employee Honey? 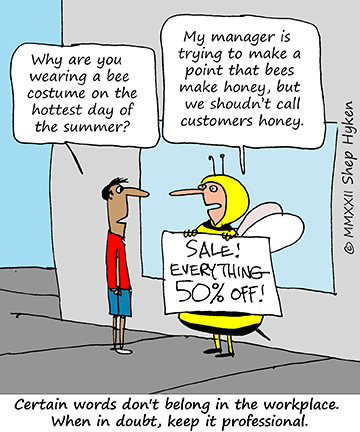 Just the other night, my wife and I joined some friends for a nice dinner. The server, who may still have been in high school, was taking our order. She looked at my wife and asked, “Honey, what would you like?”

When the server walked away, my friend said to Cindy, “Don’t you hate when someone other than your husband refers to you as ‘honey’?”

Hate may be a strong word, but Cindy’s response was simple and to the point, “I don’t really think it’s appropriate. I’m not her honey.”

That started a great conversation about what is appropriate to call your customers and employees. I’ve been called honey, hon, dear, babe, sweetie, and a few other names that are not really offensive, but could be considered inappropriate. And while I don’t really mind, I wonder what others have to say about being called any of these overtly friendly names. And to put a humorous spin on this, you could call me almost anything, but as the old joke goes, “Just don’t call me late for dinner!”

Is it bad to call someone honey or sweetie?9*

So, I Googled, “Is it bad to call someone honey or sweetie?” There are plenty of answers, but the gist of it is that outside of a personal relationship, it’s wrong. Words that were used to describe people’s reactions included offensive, disrespectful, too informal, condescending, and patronizing. Some even said illegal, in the sense that these words, which are seemingly terms of endearment, should be used for more intimate relationships, not at work with fellow employees or customers where you could end up being called into an HR meeting, accused of sexual harassment and potentially fired.

We are in an era in which being politically correct has reached new levels. When we talk to and about others, it’s important to pay attention to the words we use. Some people may be more tolerant of these seeming terms of endearment than others. But at work, we must learn that even if the use of this type of language is not meant to harm, it’s safer to simply avoid it.

By the way, this concern about what we call fellow employees and customers goes beyond the words covered in this article. We must understand what is appropriate and what is not.

So how do we stop it? A simple training session could be all it takes. This isn’t rocket science. It’s just laying the foundation of what’s appropriate and what’s not, then occasionally reminding people about it, just to make sure the training sticks.

Cendyn Announces Partnership With OpenTable to Integrate Hotel Reservation and Dining Data Into a Unified Guest Profile
The True Heart of Hospitality Is Human Kindness, Especially to Strangers
Wag! Survey Reveals 94% of Travelers Would Trade In Favorite Hotel Amenities for Pet-Friendly Accommodations
Virgin Hotels Edinburgh Partners With InnSpire to Offer Cutting-Edge Guest Experience, Casting and Contactless Service Capabilities
Good Intentions Can Be More Important Than Perfection
SHR, Stayntouch Launch Timely Resource to Help Hoteliers Improve Guest Experience While Automating Operations
youtip to Host ‘Catch Cash for a Cause’ to Support HFTP Foundation at HITEC Orlando
Understanding Consumer Behavior: How to Influence the Decision-Making Process
Another Lesson on How to Handle Angry Customers: Don’t Smell the Milk
How to Win Guest Loyalty for an Eco-Conscious World
3one3 Boutique Hotel Streamlines Operations and Delivers Contactless Guest Experience with Stayntouch PMS
Hilton Trains Waiters and Waitresses to Become ‘Waitographers’ in Order to Capture the Perfect Photo
Beekeeper Named ‘Best Employee App’ for Resorts World Las Vegas Deployment
The Top 5 Drivers of a Successful Company Service Culture
youtip Presenting on “The Power of Tipping: Going Beyond the Money” at HITEC Orlando
A Lesson from Michelangelo: Details Matter
Hotel Sales: When Product, Process, Place, and Price Are the Same, People Make the Difference
Nomadix and Telkonet Create Smart Room Experiences for Hotel Guests
PPDS to Showcase a Full Suite of Hospitality Displays and Solutions at HITEC – With a Brand-New Line of Philips MediaSuite TVs to Be Unveiled
Two Grupo Boldt Properties in Argentina Choose INTELITY to Transform Guest Experience