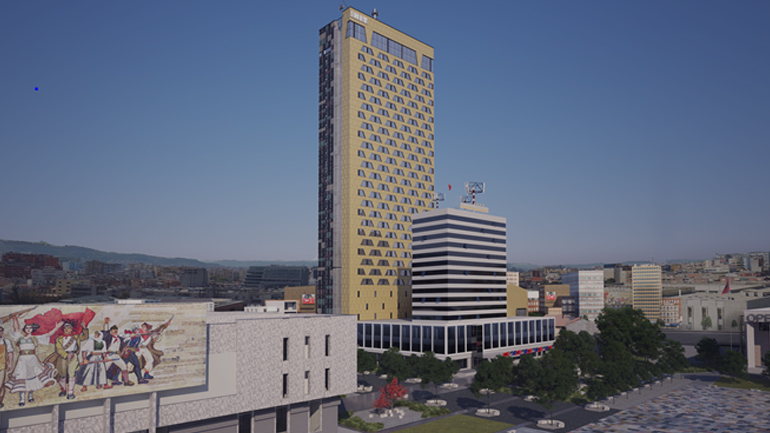 Due to open in 2025, IHG recently signed a Franchise Agreement with Mr. Ram Geci, Owner and President of Geci Group, one of Albania’s leading infrastructure companies, which also specialises in hospitality and tourism. The company has around 20 years’ experience in hospitality, having been a shareholder since 2004 and Sole Owner of Tirana International Hotel, Tirana, Albania, since 2011.

The new-build InterContinental Tirana hotel will have around 300 rooms and suites, a large conference centre with a ballroom and a capacity of up to 1,000 people for MICE (Meetings, Incentives, Conferences & Exhibitions) events and weddings. There will also be a luxury spa, and a rooftop restaurant and bar with panoramic views of the city. The hotel will be located within Tirana’s main Skanderbeg Square, close to key attractions such as the National Historical Museum, Castle of Tirana, Opera House, Art Gallery and the main institutions like the Albanian Parliament, Ministries, National Bank of Albania and Tirana Municipality. The property is just 15 minutes’ drive from Tirana International Airport.

(Mrs) Willemijn Geels, VP Development Europe, IHG Hotels & Resorts, said: “As the world’s first luxury hotel brand, InterContinental Hotels & Resorts is delighted to be partnering with Geci Group on its first property in Tirana, Albania’s capital city, cultural and economic hub. This is a great opportunity for IHG to expand within Albania, a key entry market for us, as well as grow our presence across The Balkans. It builds on momentum following the recently announced signing of Crowne Plaza Durrës – in Albania’s second largest city.”

Mr Ram Geci, Owner and President of Geci Group said: “We are delighted to be partnering with IHG on this exciting new-build project, on this first Agreement of Luxury Hotels, in the heart of Albania’s capital city, Tirana. Appealing to business and leisure travellers alike, InterContinental Tirana will be in a prime location providing some of the best hospitality experiences in Albania.”

Facilities at InterContinental Tirana will include a relaxing wellness and leisure area including an indoor pool, steam room, sauna, treatment rooms and a gym. There will be several restaurants, bars and cafés, plus a casino, kids club, library and extensive underground parking.

Bordering Greece, Serbia and Macedonia, Albania has a population of 2.9 million. Recognising the importance of tourism to Albania’s economy, the government has recently approved a set of tax breaks to help boost investment. In 2021, the total number of overseas tourists who visited Albania jumped 114% to 5.7 million people (source: INSTAT).

IHG Hotels & Resorts [LON:IHG, NYSE:IHG (ADRs)] is a global hospitality company, with a purpose to provide True Hospitality for Good.

With a family of 17 hotel brands and IHG One Rewards, one of the world's largest hotel loyalty programmes, IHG has over 6,000 open hotels in over 100 countries, and more than 1,800 in the development pipeline.

InterContinental Hotels Group PLC is the Group's holding company and is incorporated and registered in England and Wales. Approximately 325,000 people work across IHG's hotels and corporate offices globally.

Visit us online for more about our hotels and reservations and IHG One Rewards. To download the new IHG One Rewards app, visit the Apple App or Google Play stores.