HRI Properties, in Partnership with Realen Properties, Redeveloping the Iconic Liberty Title Building in Philadelphia into a 179-key Aloft Hotel

Home/HRI Properties, in Partnership with Realen Properties, Redeveloping the Iconic Liberty Title Building in Philadelphia into a 179-key Aloft Hotel

HRI Properties, in Partnership with Realen Properties, Redeveloping the Iconic Liberty Title Building in Philadelphia into a 179-key Aloft Hotel 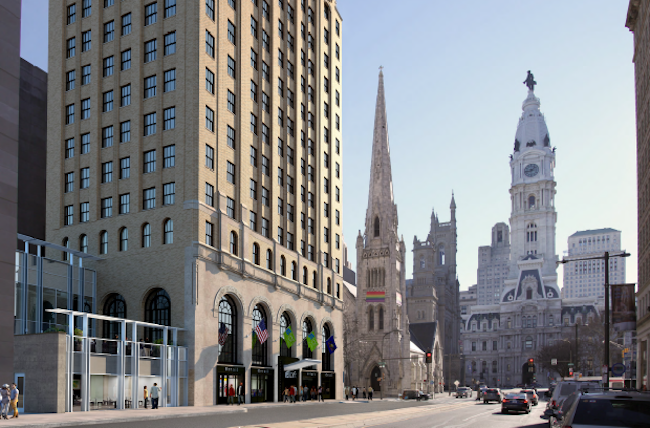 PHILADELPHIA – April 6, 2017 – HRI Properties, LLC (HRI) is currently redeveloping the iconic Liberty Title Building in Philadelphia, in partnership with Realen Properties, into a 179-key Aloft hotel. Located one block from historic Philadelphia City Hall Square, the hotel is adjacent to and has a direct connection to the Pennsylvania Convention Center Philadelphia. The new hotel will open Summer 2017.

Originally constructed in 1925 as the headquarters for the Liberty Title and Trust Company, many historic features will remain in the design of the hotel, primarily in the former bank lobby, which will become the new hotel lobby and signature WXYZ bar. The converted building will also offer guests an outdoor rooftop bar and patio, 990 sq. ft. of meeting space and modern loft-inspired guest rooms.

"We are very excited that Aloft Philadelphia Downtown will be HRI’s first property in the Philadelphia market. Our company prides itself on transforming architecturally significant buildings in urban areas and elevating them into vibrant new properties. We certainly feel we have done that with the Liberty Title Building and are eager for visitors to downtown Philadelphia to engage with the Aloft brand,” said Tom Leonhard, President and CEO of HRI.

Evan Glenn Evans has been appointed as the hotel’s General Manager, having most recently served as General Manager of the One Liberty Observation Deck, a major new attraction to Philadelphia. He was the opening General Manager for Le Méridien Philadelphia, recruiting and hiring the hotel’s entire initial staff, and holds additional hotel brand experience with Westin and Hyatt. As General Manager, Evans will be instrumental in opening the new hotel and will be in charge of directing all aspects of hotel operations. Additionally, Anastasia Owens has been hired as the hotel’s Director of Sales. Owens has held positions of increasing responsibility with groups such as OTO Development and CSM Corporation, serving in leadership roles for hotels across the country. She will oversee all sales efforts for the hotel, including training, developing and coaching sales teams to understand and exceed revenue, revPAR and sales productivity goals.

“We are thrilled to have recruited such terrific talent for two of our hotel’s top management positions. Their strong hospitality background coupled with their knowledge of the Philadelphia area will help guests have an authentic Philadelphia experience throughout their stay. We could not be happier that they joined our team,” said Todd Iacono, Vice President of Operations for HRI Lodging, LLC, a subsidiary of HRI, which will manage the new property.

The Aloft Philadelphia Downtown offers a welcomed alternative to the traditional business hotel. Guest rooms, meeting rooms, and public spaces are all equipped with fast & free Wi-Fi, and the sleek and stylish meeting space features state-of-the art audio visual equipment and full catering options. The hotel’s WXYZ bar serves as a hot spot where guests can unwind over signature cocktails, live music, and a full menu of tasty bites. The bar will offer free access to local, live events featuring emerging artists as part of Aloft's signature Live at Aloft Hotel events that take place around the world. Inspired by the vibrant public mural program in Philadelphia, the hotel will also feature large-scale art installations and a rotating art wall featuring local artists.

HRI Properties, LLC (“HRI”) is a leading diversified owner and manager of premium branded and independent hotels and upscale apartment in top U.S. markets. Since 1982, HRI and its predecessor have completed more than 80 projects with a total funding value of over $2.5 billion which include over 5,000 apartment units, over 5,000 hotel rooms, and more than 1.4 million square feet of office and retail space. HRI Lodging, a wholly owned subsidiary of HRI, provides hotel management services for both HRI owned and third party property owners. HRI Lodging operates 26 hotels and is an approved operator for premium branded and independent hotels.    HRI is a full-service real estate development company, with in-house architectural design and construction management capabilities and is a national leader in the adaptive reuse of historic structures. As the re-urbanization trend in the U.S. continues, we are committed to Elevating the Urban Experience by developing, acquiring and managing high quality real estate located within “walkable” urban neighborhoods where people want to live, work and play.

For more information, please visit our website at www.hriproperties.com

With more than 100 hotels now open in 19 countries around the world, the Aloft brand delivers a fresh approach to the traditional staid hotel landscape. For the ‘always on’ next generation of traveler, the Aloft brand offers a tech-forward, vibrant experience and a modern style that is different by design. Aloft is proud to participate in the industry’s award-winning loyalty program, Starwood Preferred Guest®. Members can now link accounts with Marriott Rewards®, which includes The Ritz-Carlton Rewards® at members.marriott.com for instant elite status matching and unlimited points transfer.