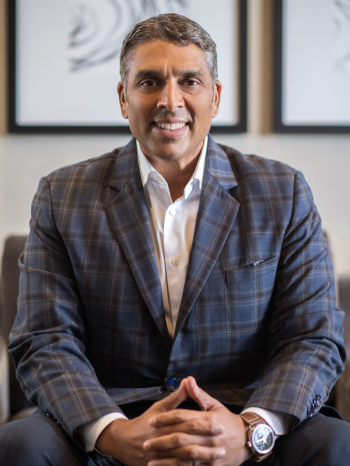 Mit Shah, founder and chief executive officer of Noble Investment Group (Noble),
will be recognized as the 2023 Hospitality Executive of the Year on April 4, 2023.
Credit: Kat Goduco. All Rights Reserved.

UNIVERSITY PARK, Pa. — The Penn State School of Hospitality Management in the College of Health and Human Development and the Penn State Hotel & Restaurant Society (PSHRS) have named Mit Shah, founder and chief executive officer of Noble Investment Group (Noble), as the 2023 Hospitality Executive of the Year.

Founded in 1993, Noble is an industry-leading real estate investment group specializing in the travel and hospitality sector. Through its institutional real estate funds, Noble has invested nearly $6 billion in communities throughout the country, creating thousands of jobs.

The School of Hospitality Management and PSHRS will recognize Shah for his leadership and many accomplishments in the hospitality industry at a gala reception at The Penn Stater Hotel and Conference Center in State College, Pennsylvania on April 4, 2023.

“It is an honor to be recognized by the Penn State School of Hospitality Management and the Penn State Hotel and Restaurant Society,” Shah said. “As one of our country’s oldest and most respected hospitality programs, the school, its faculty, administration, and staff continue to help ensure that our future hospitality leaders are well prepared to live lives that matter.”

The Shah family, led by Mit, has endowed the Bharat Shah Leadership Speaker Series at Georgia State’s Cecil B. Day School of Hospitality in the J. Mack Robinson College of Business in honor of his father, Dr. Bharat Shah. Over the years, Mit has brought thousands of students and industry stewards into the living room for candid conversations on the personal journeys of struggle and perseverance of industry icons, including former Hospitality Executives of the Year, Chris Nassetta and Arne Sorenson. The series has served as an inspiration to the hospitality and business community, and particularly to our nation’s college students.

This 2023 event not only recognizes Shah, but also provides the unique opportunity for Penn State Hospitality Management students to directly interact with and learn from one of the leading executives in the hospitality industry.

“Mit Shah’s informed optimism about the hospitality industry is shared wholeheartedly by me and by the students studying for degrees in hospitality management at Penn State. Among the most inspiring executives in the industry, Mr. Shah’s leadership across three decades as the CEO of Noble is unmatched,” reflected Donna Quadri-Felitti, Marvin Ashner Endowed Director of the School of Hospitality Management.

PSHRS has honored industry icons through this prestigious award since 1960. Its recipients represent a ‘Who’s Who’ of extraordinary individuals who made indelible marks on the profession.

“It is an honor to recognize Mit’s extraordinary vision and insight in driving Noble to become the leader in select-service and extended-stay travel and hospitality.  As anyone who knows Mit would acknowledge, he guides us with humility, respect, and integrity. A true American success story, Mit makes us all better,” emphasized George Dabney, Penn State class of 1988, Noble Managing Principal and Chief Financial Officer, who has long served PSHRS, as a board director, treasurer, and its sponsorship committee chair. In addition, Dabney was honored by PSHRS as Alumni of the Year in 2019.

“As the outgoing president of the PSHRS, it is my distinct honor to welcome Mit Shah to the pantheon of fellow Hospitality Executives of the Year, which began over 62 years ago. Mr. Shah and his family have a tradition of supporting and exciting the next generation of hospitality professionals through higher education, and our recognition of him celebrates his accomplishments in and out of the boardroom,” noted Ashley Akright, Penn State class of 2009, Director of Operational Excellence and Innovation, Gaylord Rockies Resort and Convention Center.

In addition to his leadership role at Noble, Shah presently serves as an executive committee member of the board of directors for the American Hotel and Lodging Association, is co-chairman of its Industry Real Estate and Finance Advisory Council (“IREFAC”), and is a member of the owner boards for Marriott International and Hyatt Hotels Corporation. Shah also served as chairman of the board of directors for two public companies, LaQuinta and CorePoint Lodging REIT, prior to their successful realizations for shareholders.

For 85 years, the Penn State School of Hospitality Management has been a leader in higher education and research in service to the hospitality industry. With innovative courses, a tradition of engaged scholarship, and discipline-shaping research by world-class faculty, the school inspires all students to pursue excellence in scholarship, exhibit a strong work ethic, and become effective and ethical innovators.

To learn more about the gala reception and reserve attendance, http://www.hhd.psu.edu/shm/hospitality-executive-of-the-year.

The Penn State Hotel and Restaurant Society (PSHRS) was founded to strengthen all hospitality professions and enhance the reputation of the Hospitality Management program (HM). PSHRS is an Affiliate Program Group of the Penn State Alumni Association and the College of Health and Human Development Alumni Society.

About The School of Hospitality Management

Established in 1937 Penn State’s School of Hospitality Management is one of the nation’s oldest and most respected.  Its top-ranked undergraduate and doctoral programs prepare global leaders with a rigorous, diverse curriculum focused, since its inception, on engaged scholarship, featuring partnerships with Penn State's Hospitality Services, Housing and Food Services, and top global hospitality brands.  It’s also home to the oldest Penn State alumni program group, The Penn State Hotel and Restaurant Society.