Hospitality Financial Leadership: EFTEs, Productivity Measurements – Why Use Both

Hospitality Financial Leadership: EFTEs, Productivity Measurements – Why Use Both 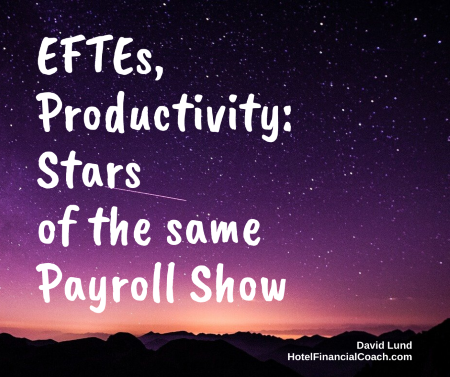 Most hotels measure payroll as a percentage of revenue or, as it is commonly referred to, labor cost percentage. This is not helpful. Why, you ask? Well, first of all, if sales magically increase because of an increase in the average room rate or average cover, your labor cost will automatically improve. Did anyone actually do anything better with the payroll? No. Or, if there is an increase in wages due to an outside force like the minimum wage increased, then your labor cost will suffer and did anyone actually do anything negative? No. So you see the limitations of labor cost percentage.

Let me introduce the two different stars of the payroll show: The measurement of Effective Full Time Employees (EFTEs) and Productivity. They are two separate things. However, in order to completely understand what’s going on inside hotels where the payroll consumes on average 50 percent of every dollar of revenue, you must employ both simultaneously. Most people confuse these two separate calculations. It’s critical to see that they are separate. They give us different information points and they are separate tools.

It is like a speedometer and a tachometer in your car. One tells you how fast your car is going and the other tells you how fast your car’s engine is going. Your engine can be going very fast (revving) and your car’s speed not so fast. Same with your payroll. You can have fewer EFTEs and be less productive or have more EFTEs and be more productive. Without both device measurements working together, you will only ever see one side of the picture. With a view to both measurements you can take care of your biggest cost with a much better view.

EFTEs are designed to help you see in an instant how may “Equivalate” employees you have in a given area in a given time period.

For example, the front desk operates 24 hours a day – seven days a week. Last month you had busy stretches and quiet days as well. You used a total of 3,156 hours at the desk. That equates to 18.4 EFTEs for the entire month. Last year you were busier with eight points more occupancy. However, you used basically the same hours at 3,099 or 18.1 EFTEs. Straight away you see a correlation between the two numbers and also see that you were able to operate last year when busier with less. This shows part of the story.

Another application you can use EFTEs for is benchmarking. You have six hotels and they are all right around 100 rooms. Each one has a front desk and they operate basically the same. When you look at the EFTE count for each hotel you see a range from 15.2 to 22.6 EFTEs for the same month. Each hotels occupancy is different, but they are all in the same range around 70 percent.

The EFTE measurement allows you to instantly see who is the most efficient – and the least.
To capture the EFTEs, just record the hours and the financial system will calculate them for you, for the month and YTD. You also can incorporate these on your daily reports, budgets and forecasts.

The other super tool measurement is productivity. Now that you have the hours captured, you can produce the productivity.

Productivity in the case of the front desk is hours per room occupied. Take the number of rooms occupied and divide it by the number of hours worked at the front desk. For an in-depth look at how to do this in all areas of the rooms division read the article here. Rooms.

You can do the same with F&B and its hours per customer cover served. Read here.

Using these two instruments together is very helpful. The single use application is OK but the two together is definitely the way you want to go.