Hospitality Financial Leadership: Chapter 14 – The How To vs. The Want To

Home/Hospitality Financial Leadership: Chapter 14 – The How To vs. The Want To

Hospitality Financial Leadership: Chapter 14 – The How To vs. The Want To 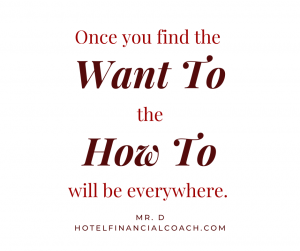 Mr. D returned the next morning promptly at 8:30. He came straight to my office and closed the door, removed his jacket and hat and asked, “So, Oliver, who will you serve today?”

Confused. I said, “My job is to run this hotel and the service is what my employees provide to the guests.”

“Yes,” Mr. D replied, “But that’s only part of it. To be truly successful you must serve your team.”

Already exasperated by this nonsense I smiled and asked about the day’s lesson.

Mr. D sat and looked at me for what seemed like an eternity then he smiled just a little and said, “It looks to me like you don’t want to.”

Mr. D. explained that what was really missing was me actually wanting to be of service. He said that once I was able to find the “want to” the “how to” will be everywhere.

He then asked me if I would like to hear a story. Sure, I said, somewhat placating him. Anything to get him to move on and change his tune. His story was from his time in San Francisco. The company back then had transferred the young manager to the city and put him in charge of the hotel operations, a No. 2 so to speak. He said his title was First Officer. I think he may have been confusing his time in the armed services with his hotel career. None-the-less the story ensued.

He had moved to the city with his wife Therese and left behind his daughter Rebecca who was finishing university. The following year Rebecca also joined Mr. D and Therese to start her career in the business world.

It was slow going in the beginning for the young lady and their home life was showing a little strain. The condo they were renting was small and Alyson was occupying the TV room as her bedroom.
He went on to explain that no matter what he or Therese tried, the girl was a complete disaster in her household duties. Her room was a mess and because the quarters were small, he and his wife were continually exposed to her disarray.

He chuckled as he explained the situation like only a father could. He spelled out that he knew that buying his daughter a book on how to clean her room or sending her on a course for the same subject was not the answer. What was missing in this situation was Rebecca simply didn’t want to keep her quarters clean.

“That is what is always missing in a circumstance when one person does not want to succumb to the request of another. They say they don’t have time or even that they don’t know how!

“It’s always the same, Oliver, if I was going to have any hope of success with Rebecca and her room it must always be on the level of want to.”

I was somewhat amused by his little story and at the same time I had a real sense of awaking, just a twinge but very much detectable. Was my situation today with this mess and being tutored by this antique in any way because I didn’t want to be a good manager? I thought for a moment and he was right there with me.

“Do you want to be of service for your team?”

I reflected and said quite honestly, “I never thought of it that way and I’m not so sure it would make any difference.”

Mr. D smiled and said, “Now we have something to hold onto.”